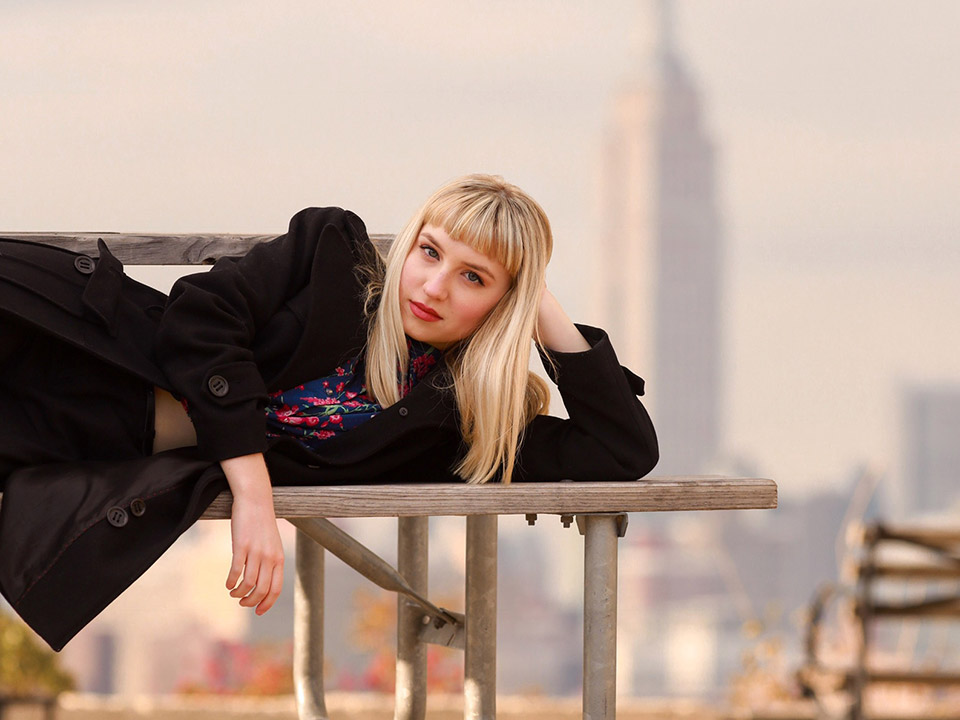 Check our interview with prodigy chef Emmalee Rainbow Abrams who has been recognized largely in the culinary industry. At just 16, she has worked with celebrity chefs such as Top Chef’s Mike Isabella and Jamie Lauren. She stars as a regular on FYI’s hottest cooking competition series, “Man Vs Child”.

Another one of Emmalee’s projects is her band, Sunset & Vine. The band’s sole songwriter, Emmalee plays electric guitar and sings lead vocals for this new age indie rock group. Their catchy debut single, “Surf’s Up” is available now on all streaming platforms. They are currently working on their debut album.

Emmalee has been a professional actress for over a decade. Quickly signed to a top youth agent after moving to California at three years old, she starred in a long string of commercials, as well as shows like Modern Family and Monday Mornings.

Hi Emmalee, please tell us a little about you?

This is tough… I’d have to go with loyal, persistent, and creative.

When was it that you first realized that you wanted to pursue music/chef as a career?

I realized I loved cooking when I was about 7. My dad and I would always cook together when I was little and I later developed a very strong interest in the culinary arts. Making food is something that brings people together and makes people feel good, which really is my goal. For music, I grew up in a family of singers and songwriters. My Australian rock pioneer grandmother, April Byron, was the first female singer to record with the Bee Gee’s, so writing music came pretty naturally to me. I started teaching myself guitar when I was 12 and began writing songs from there. It blossomed into something very therapeutic and enjoyable to me.

Oh yeah! My family is jam packed with creative souls. Honestly if I had said I didn’t want to be an artist, that’s when they would’ve been disappointed, haha!

Tell us about your chef experience? And where the love of cooking comes from?

My dad was a chef in upscale hotel restaurants, so learning from him was a real blessing. I also watched a lot of cooking shows and YouTube videos to further my culinary knowledge. My love of cooking stems from my love of food – it’s something that has always brought me so much joy. Most likely because I’m a Taurus!

How was working with celebrity chefs such as Top Chef’s Mike Isabella and Jamie Lauren?

It’s always so crazy working with chefs I’ve looked up to for years. Chefs Mike Isabella and Jamie Lauren (whom I love and miss, by the way!) opened up so many doors for me and made me realize just how much innovation and possibility really is in the culinary industry. I’m genuinely very grateful to get to work with such talented culinary artists.

And about the FYI’s hottest cooking competition series, “Man Vs Child?”

Man Vs. Child was a blast to work on. It was always my dream to be on a cooking competition show. My best friends and I used to host mini food competitions in my home kitchen that my dad would judge, so MVC was a big accomplishment. I met so many talented chefs and felt very humbled to be recognized for my work at such a young age. I wouldn’t be where I am today without Man Vs Child!

Now on the music side, tell us about your band Sunset & Vine?

My band, Sunset & Vine, has collectively been playing together for almost four years. I’d classify our genre as indie surf rock. My bandmates, Griffen Scott, Finn Bennett and Evan Vakulich are absolute dreams to work with. Raw talent. There’s no drama or ego’s, we’re all just kids who like to make music together. They have a way of taking my vague descriptions of songs and bringing them into fruition EXACTLY how I want them to sound. Just getting to watch them work is a gift and I’m very lucky to be on this artistic journey with them!

Tell us about your single “Surf’s Up?”

I wrote Surf’s Up (in the shower, LOL) in 2015 and never thought it’d be our debut single, but people really seem to like it. It has a childish charm to it, there’s nothing heavy, it’s just a feel-good song you can sing along to. People have told me they turn on the song, close their eyes, and instantly feel like they’re laying on a beach in California when it’s the dead of winter in the midwest, which was exactly our goal. It’s available for streaming/purchasing on all platforms… Just be warned, it will almost definitely get stuck in your head.

Where we can see you guys play next?

We don’t currently have upcoming shows locked in, because we’re hashing out new songs and planning a brand new set! We’re taking some time to get things super perfect. Just follow us on BandsInTown or Instagram for show updates. But if you want to see us play live this very second, we have a couple videos up on YouTube and our IGTV.

This sounds extremely cliche, but be yourself! There are so many singers out there who sound exactly the same as each other. But if you put that pressure to sound a certain way aside, you’ll be much happier with your voice. Finding your own sound can take awhile, but it’s worth it.

Honestly, I get SO nervous before a performance that it levels out to almost look like a panic attack. I struggle with very bad anxiety on the daily which I think makes the pre-show nerves worse, but once I get out there, I take all that adrenaline and put it into my performance. But the feeling after a show is the greatest high you could ever experience.

I draw influence from a bunch of different sources while trying to maintain my own unique sound. My favorite artists include Alvvays, Weezer, 311, Fleetwood Mac, The 1975, Liily, Grouplove and Best Coast. Oh and also Lady Gaga, duh.

Describe your sound in 2 words?

You are also an actress, tell us about that and which projects you have been part of?

I have been working professionally as an actress since I was literally 4 years old. My first gig was a Mervin’s commercial. I’ve acted in a very large string of commercials, and also made some appearances in shows and films (like Modern Family for instance) over the years. I’ve always loved to experiment with viewing the world from a different standpoint than my own, so hopping into the shoes of another character is the perfect outlet for that. Acting requires you to leave a piece of yourself behind, and I think that in itself leads to more self awareness.

I have really only worked on comedic projects, but my favorite scenes to do are dramatic ones. All my favorite shows and movies all have a lot of intense and emotional scenes, so it’s my dream to show off that side of myself as an actor. I have been writing a feature film for a few months now that I’d love to put into production someday soon.

I don’t think anyone is capable of being “happy” every day for the rest of their lives, but it’s still something we strive towards. We think “when all my dreams come true, I’ll be so happy and nothing will ever go wrong!”, but that just isn’t realistic. I think happiness is achieved when you realize you’re not going to feel good all the time, mentally or physically, and that’s perfectly okay. Pain creates art. Content and understanding within every emotion you feel is the number one ingredient for self growth and acceptance. I just want to be accepting and okay of whatever emotion I might be feeling.

Yoga, my guitar, a good book, kombucha, and sushi. Lots of sushi.

My Aunt Candy told me that feelings of envy towards other’s successes will never result in my own success. So be happy for others. You’ll get yours when the time is right!

What is next for Emmalee Rainbow Abrams in 2019?

I am (still) working on my cookbook! It has been a long time coming as my followers know but it’ll be out soon! The guys of Sunset & Vine and I will be releasing new stuff and playing super fun shows as well.

Something I’ve never opened up about on the internet is my struggle with chronic pain! I’ll elaborate someday soon when I’m ready, but just remember that you never know what’s going on in other people’s lives.

I have always wanted to go to Tokyo! I would love to go with a group of friends and eat ALL DA FOOD.

I would want to sit and have a cup of tea with Hillary Clinton. Pretty self explanatory. What an incredible woman.

I’m a big fan of sugar snap peas. I don’t know why I’m so obsessed with them, it’s so random but they’re my favorite! Dunk them in some vegan ranch and they’re the best.

A big shop at the farmer’s market, then a backyard dinner party with all my friends and plenty of jazz instrumentals.

I’ve raised money for No Kid Hungry, the Trevor Foundation, and volunteered a few times for the Planned Parenthood Action Fund!

The Surf’s Up music video is going into production very soon! Can’t wait for everybody to see it.

Eclectic. It all depends on my mood that day. Sometimes I dress businesswoman chic, or I’ll go for grunge, then other days I’ll dress head to toe in vintage and pretend I live in a different time.

Social media is a wonderful way to connect with others and express yourself, but it can also be a toxic environment. I make sure to post only the most honest content and limit my time online to stay present in my day to day life.

Quote: “Set some goals. Stay quiet about them. Smash the hell out of them. Clap for your damn self.” – Diddy

Movie: The Ghost and Mr. Chicken.

Sport Team: To be honest, I don’t know anything about sports, I’m sorry, haha!