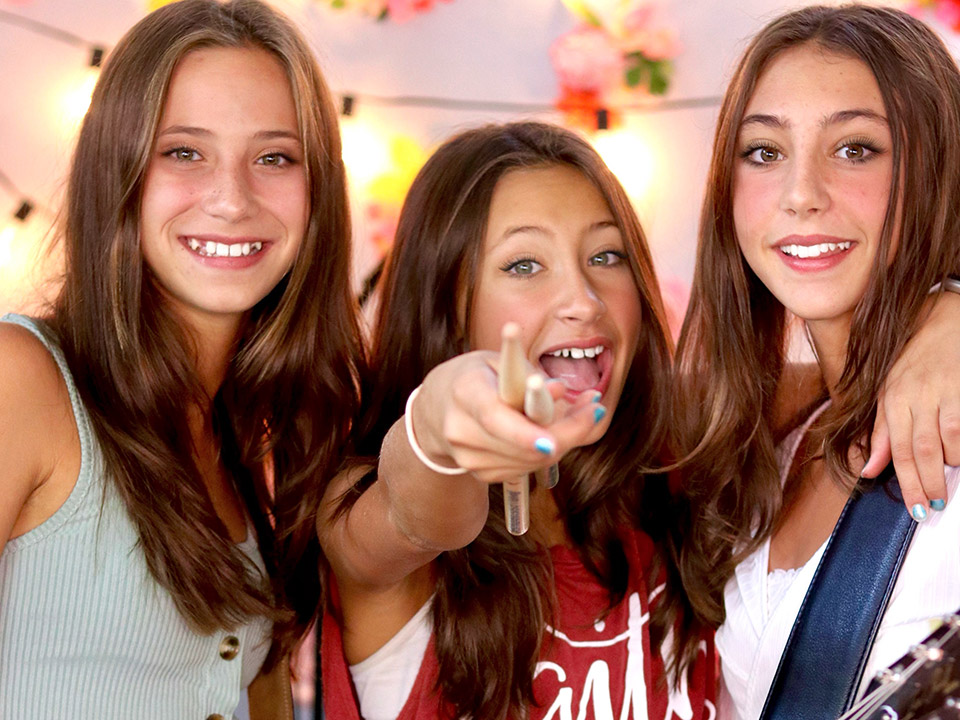 Check out our interview with Hello Sister, a pop-rock band of tween sisters, Grace, Gabriella and Scarlett Mason. They are all singers, songwriters and musicians with a sound that echoes back to a time when every teenager dreamt of being in a rock ‘n’ roll band. With pop music today seemingly absent of any hint of its ancestry these three sisters are bringing back rock ‘n’ roll!

Grace: Many years ago, our Dad was in a band in his home country of Canada and toured a lot internationally. I think his love of music stuck with him because you will always find him picking up his guitar, writing songs and jamming with us. It is because of our Dad’s love of music I started singing at a young age, soon after Gabriella and Scarlett joined in and we all choose different instruments. It is so much fun playing music with my family!

Scarlett: Mostly our Dad influenced us and he was the reason we began to play music. Now I think we are all influenced by a variety of music we hear from pop, R&B, rock, country, dance, and rap. I would say we are more influenced by all of the sounds around us now more than any one artist. We listen to all of those genres purposely. Oh! And I forgot we listen to jazz every evening at dinner time!

We all sing, with Grace mostly doing lead vocals, then Scarlett and then sometimes me!

Do you guys ever get nervous?

Grace: Yes, we do get nervous sometimes, but once we start playing our music together, we just get into it and our nerves just go away! 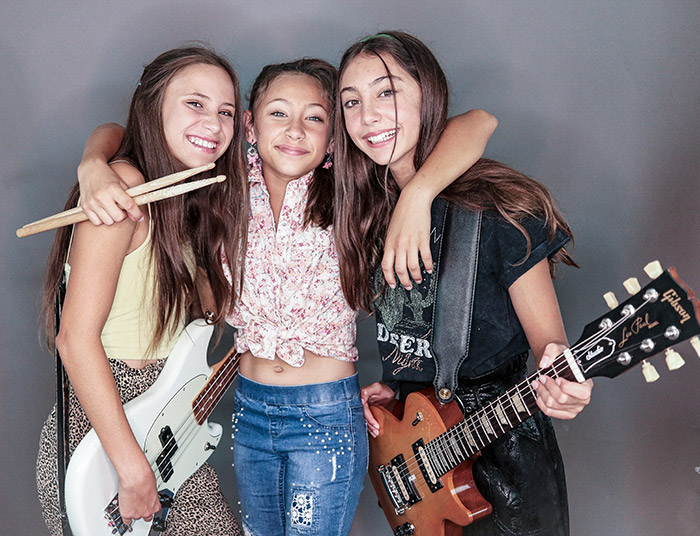 Tell us about “Pop Through the Decades?”

Scarlett: Pop Through the Decades is a series that we co-created with our Dad. Our parents always encouraged us to listen to a variety of different music genres so we would have a diverse background in music. As different music was shared with us, they would always talk to us about it. A couple of years ago our Mom made us a binder that had music from each decade going all the way back to, I think the 1920’s! Anyway, it was to show us some of the big musical acts of the past and to show us how music has evolved over the years. So that was where it all began and the inspiration for Pop Through the Decades!

Grace: Yeah! The first episode was super fun to do! We found a hit song from the 1980’s from Prince to cover and we met with Prince’s guitar player, Dez Dickerson, the former guitarist in Prince’s band Revolution. That was so cool!

The second show is already in the works and we are super excited to keep creating more shows to share with the world.

Pop Through the Decades Episode 1

What’s the story behind the Hello Sister songs?

Gabriella: The songs we write kind of tell a story about us really when you think about it. Kids in an Adult World, Middle Schooler, and well… Life of the Party – (laughing) 😊 Some songs like Paralyzed and I Just Met You are about first relationships – well those are more just about girls our age and how they feel about boys – not specifically about us!

Now tell us about your Mission Hello Sister!  Project?

Grace: Our Anime is a fun fresh new animated series that follows us, Hello Sister, using our Super Power of music to help others and save the world!  It was so cool to see us in a cartoon version!

Our first episode ‘Freaking out like a Middle Schooler’, follows us at our Middle School tackling current problems of our generation with our new Super Power – The Power of Music!  This was so much fun to create. We are currently writing episodes 2 & 3 and we can’t wait to share more!

Gabriella: Yeah! We are on a mission to bring back rock and roll – or at least our version of it and be good role models for our generation. We want to bring clean, fun entertainment to everyone.

Mission Hello Sister – Episode 1 Freaking Out Like a Middle Schooler!

What is the next goal for Hello Sister?

We want to keep creating new music and being an uplifting, fun part of everyone’s days during these difficult times!

Now tell us about the events UNICEF, The Prince’s Trust, and Starlight Children’s Foundation Australia? That’s amazing that you guys can use your talent and platform to help a good cause.

Hovid Povid, based on the movie Hocus Pocus was a film that was created during Halloween this year as part of the Trick-or-Treat for UNICEF annual fundraiser. It was so much fun to reenact a scene from that iconic movie!

We recorded a mini concert and will be one of the featured performers that will air on November 7 – 5pmEST for the Unlock Virtual Festival (UnlockFestival.co.uk) which aids The Prince’s Trust. (Online, streaming via YouTube Live)

On November 20 – 10pmEST we will kick off a partnership with the Starlight Children’s Foundation Australia (Starlight.org.au) where we will be featured guest performers on a Facebook Live streamed show which also broadcasts across the Starlight TV network in hospitals throughout Australia. Along with show host Captain Starlight, we will perform three of our original songs. (Online, streaming via Facebook Live @StarlightAustralia)

Did you guys had other plans/concerts planned and cancelled because of COVID? If so have you done any online concerts or interaction with your fans?

Yes, we had a Middle School Tour called ‘Peer 2 Peer’ (P2P) and it has been changed to online for now. In August we were a featured virtual performer in Girls’ Life Magazine Back-To-School Music Takeover which was so fun! And, we are so happy to be a part of the Unlock Virtual Festival for The Prince’s Trust.

What’s next for the Hello Sister or for Grace, Gabriella and Scarlett in the last months of 2020?

We are working on several new songs; the second episode of our series ‘Pop Through the Decades’ and we are in the process of creating more episodes for our animated series. Be sure to follow us on social media (Instagram: hellosistermusic) we always share updates and announcements on there!

Swimming, running, arts & crafts, thrifting, cooking & baking, playing outside and hanging out with our friends!

Be true to yourself – don’t change who you are for anything or anybody.

We are actually involved in a lot! We go to public school and we all are competitive runners and swimmers so our swim team and cross-country track teams keep us really busy; as well as our band!

Church, family brunch, free time to relax because we are always so busy.

Scarlett: Luke Combs – When It Rains It Pours.
Gabriella: Whatever is on the radio.
Grace: Halo by Beyonce / Defying Gravity from Wicked

Scarlett: Happiness is spending time with my family, playing music with my sisters and relaxing outside.
Grace: Happiness is when you are doing something you love and it doesn’t feel like work and also when you have a chance to be yourself and not worry about what anyone else thinks.
Gabriella: Happiness is doing what I want to do not what someone else has told me to do.

We are currently working with the Starlight Children’s Foundation Australia; The Prince’s Trust and we just had a cameo in a movie that benefited UNICEF.

Scarlett: I like fun comfortable clothing.
Grace: I have a trendy / casual style – ripped jeans, crop shirts, vans or converse shoes but I also love to dress up in formal dresses.
Gabriella: I like vintage clothes with an edge but honestly, I wear whatever is clean in my closet!

Gabriella: It is a great way to interact with others and a good avenue for young artists to be able to show their talents to everyone all over the world. It sometimes can be overwhelming though keeping up with it all and I can see how it can also be destructive. Like a lot of good things – you have to use it wisely and only for good.

Quote: Be Your Yourself because everyone is already taken, Oscar Wilde