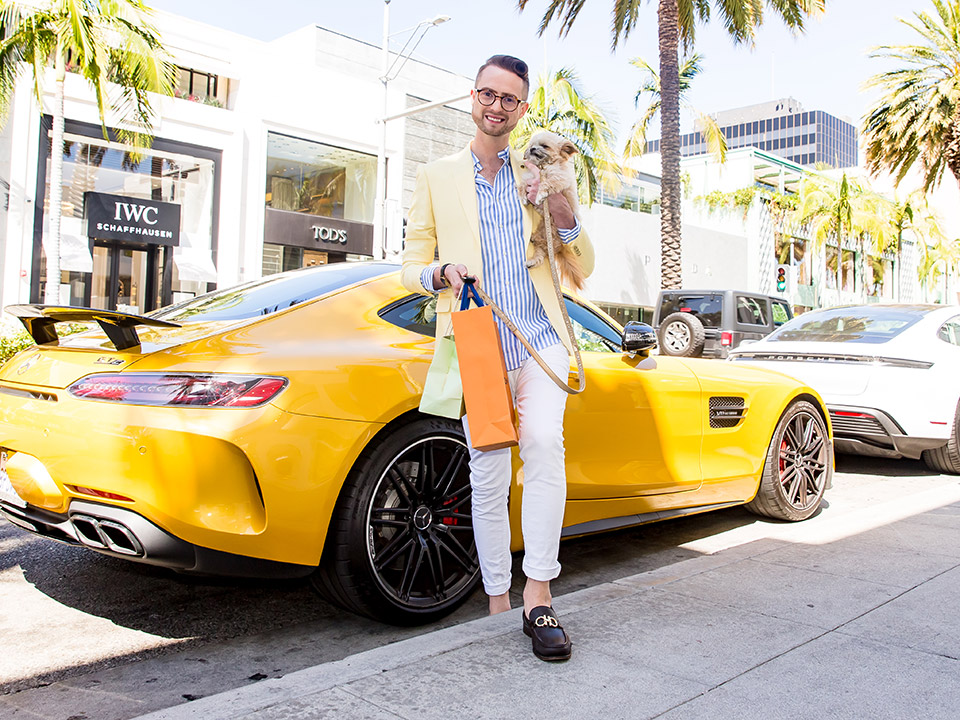 Check out our interview with Dan Babic who is best known as the lead host of FabTV on Roku where he covers all things celebrities and Hollywood. He is present at many red carpets like the Oscars, Golden Globes, etc. where his interviews have garnered over 36 million views. He is also the host of ‘Design Genius’ on Fashion Television very similar to our ‘Project Runway.’ ‘Design Genius’ currently airs in 160 countries with nearly 350 million viewers. He also hosts The CW’s ‘Unfiltered Experience’ where he travels around the globe hosting beauty exhibitions and panels with celebrities and influencers. He has also been seen on E! Network’s ‘Dating No Filter’ in January.

Dan also joined the cast of Los Angeles-based dog rescue foundation Vanderpump Dogs formed in 2016 to better the lives of dogs domestically and internationally to reinvent the image of a dog shelter from a pound to a palace. After becoming aware of the Yulin Dog Meat Festival in China and witnessing the horrific images of slaughter and abuse that the dogs in Yulin face, founders Lisa Vanderpump & Ken Todd began the long journey towards trying to stop the barbaric torture practices in Yulin and end the dog meat trade in Asia. Together with their partner Dr. John Sessa, they launched the campaign Stop Yulin Forever.

Though an Australian native, Dan has surely been making his mark in Hollywood and this is just the beginning for him. Dan identifies as LGBTQ. 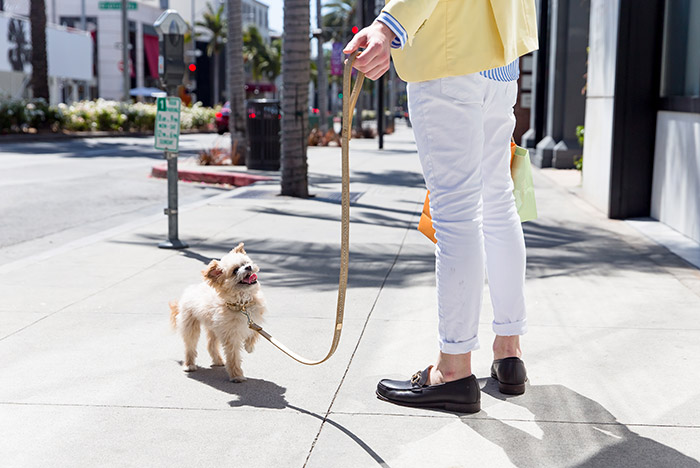 Hi Dan, please tell us a little about you?

I mainly work as a TV host/Red Carpet Reporter. I came to LA at 20 from Australia on a student/work visa. Upon arrival, I physically went door to door to all the top public relations/event planning firms in Beverly Hills (which is something people just don’t do anymore) in hopes of getting an internship and I did. Every day I came to the office dressed to the nines. At company events, my vibrant personality and style could not be ignored so I started being given red carpet opportunities and the rest is history!

It’s brought a tremendous deal of happiness to me. When you do what you love and are fulfilling what feels like your destiny, an enormous amount of joy is sparked. Don’t get me wrong, it’s been far from easy and I have days that suck like everybody, but I’m incredibly grateful for all I’ve don’t and continue to achieve.

What is the best and worst part of being in Tv and as a Host?

The worst part is having to get up early to be on set. But the best part is getting to talk to people all day long. I’m a complete extrovert and love working on a team. It’s such a special experience being on a TV show as everyone comes with their own unique skill set and we all work together to make something magical.

How do you prepare for this?

I try and strike a balance between being prepared but not overly prepared. I never want to seem too scripted or lose my authentic voice. I always meditate before going on set and drink a smoothie. I guess you could call it my ritual.

All of the interesting people I get to meet. It lights me up in ways I cannot describe.

Not to derive all your happiness from your job. I used to only be as happy as the amount of work I had which sets you up for failure. We are multifaceted beings and I believe that one should not be so easily defined.

Tell us about your work in the Peacock series ‘Vanderpump Dogs?”

I used to watch the RHOBH every Wednesday night as a teenager and fantasized over that world. It seemed so magical and far away so to get to work with Lisa really was a dream come true. But what tops it all is adopting little Gizmo. He is the light and love of my life (sorry boyfriend David) and I can’t imagine my life without him.

How did you got selected for this series?

Casting kept on hitting me up which is funny as it’s usually the other way around. While I’ve hosted reality shows I’d never been a proper cast member of one and I truly believed and still believe my greatest calling is to be a reality tv star (and I’m not even joking haha!).

How is working with Lisa Vanderpump?

It was truly fantastic and I’m not just saying that. She is so much more sensitive and down to earth than people would realize and her passion for rescuing dogs is unmatched. I had the preconception that Vanderpump Dogs was like a side project for her but it really is her entire life.

And about your work on ‘Design Genius’ on Fashion Television?

I joke that my role on the show is like low-budget Tim Gunn haha, but in all seriousness, it has been the single greatest experience of my life so far. Getting to travel and work with some of the most talented up-and-coming designers from around the world has lit me up in ways I cannot describe. Our cast and crew come from over 35 countries so it’s a melting pot of diversity and different cultures- which I think is the coolest part of all.

I’m proud to be the host of The Unfiltered Experience, in which I have in-depth conversations with top beauty experts and celebrities about how to be your best self.

What kind of show or projects do you like or would like to work on and why?

I’d love to be a full-time cast member on a show similar to the housewives. I’d also love to be a sitcom character. We’re all given talents and gifts in life and my greatest gift has been my bold, larger-than-life personality. It evokes such joy and entertainment in people that I think a reality show or a sitcom where I play someone similar to myself would be a fantastic fit.

‘The Joy Ride’. Because despite the good, the bad and everything in between I think life is one big joy ride. I don’t focus on trying to be happy anymore. I focus on what sparks the most joy inside me and am constantly moving in the direction of joy. I think that’s where happiness is born.

How do you manage all the social success you have and the part that everyone is looking to you all the time?

I am a complete extrovert, that’s why I got into the industry in the first place. While many would find the social element of my job draining, it actually gives me energy and is something I really enjoy.

‘The Beautiful No’ by Sheri Salata.

Doing things that spark my joy inside me (thank you, Marie Kondo!) That really is my pedometer reading for success- how much joy am I having.

This is going to sound so random but I love anything with almond milk in it. Whether it be ice cream, a smoothie, or an acai bowl- it always has me feeling so much better after it.

Chicken Schnitzel, French fries, and gravy. If you haven’t tried the three together you are seriously missing out!

Timeless, classic with a bit of an edge.

Oprah! I still can’t believe I haven’t met her but she is my idol and is the reason I got into the business in the first place.

Israel with my father. Even though we are not Jewish I have always felt a spiritual connection to Israel. Maybe I was Jewish in a past life but the history fascinates me to my core. While I’m more spiritual than religious, I was raised Catholic and my dad is a man of faith so I think he would enjoy that aspect of it.

It’s not so much advice but words of wisdom… ‘these things happen’. I used to feel completely debilitated by mistakes I made earlier on but shit happens! As long as you have learned and grown from your past mistakes, then I guess they were really not mistakes after all.

My charities of choice are Operation Underground Railroad (O.U.R.) and The Children’s Hospital. Any charity that helps children gets my full support as I truly believe no child should ever have to suffer.

For those of you who don’t know what O.U.R is, they assist government agencies in the rescue of human trafficking and sex trafficking victims, with a special focus on children. Their goal is to eliminate sex trafficking worldwide.

Sleep in, Nobu Malibu with my boyfriend followed by a light afternoon hike. I like to be home by dark on Sundays as I believe a Sunday night in brings a week of content. It’s a ritual my family has always followed. My ideal Sunday evening would be with my family all around the table enjoying my mother’s roast chicken. They are all in Australia so hopefully, I get to do that soon.

Someone with a big ego or someone who thinks they are better than other people. Ewwww!

Toxic by Britney Spears. It’s the greatest pop song of all time. Need I say more?

Errrkkk, to be honest, I really don’t like it. It has many benefits but I think we were all so much better off before it. People lived more authentically and were more present with each other. One’s self Esteem was higher and we didn’t compare ourselves to each other as much. I think it feeds into people’s biggest fear of ‘Am I really good enough?’.

The best is when someone is going through a tough time and they say that I made them laugh and forget about their troubles for a minute. That’s what it is all about.

As for the worst, there’s enough negativity already in the world to repeat any of that.

One of these days I’ll get around to TikTok!

Book: The Beautiful No by Sheri Salata

Quote: “What a wonderful life I’ve had. I only wish I’d realized it sooner.” -Colette.
& “You’ve always had the power my dear, you just had to learn it for yourself” -Glinda The Good Witch, The Wizard of Oz