Check out our interview with twins Sydney + Mia aka Stereo Jane, who are true pop-rock artists from Detroit. Upon moving to LA, the girls raw talent was quickly noticed as they landed a writing gig alongside Kesha and had a single on the motion picture film Ready or Not staring Margot Robbie (2019)

We started our band when we were 7 years old and started warming up for our dad’s band in bars when we were 10! We started working with other songwriters and producers in our teen years. When we were 17, we signed to Atlantic records and finished our last 2 years of high school online! That’s pretty much the gist of our entire childhood.

Like we mentioned before, our dad was in a band and we grew up around it! He was auditioning bass players when we got home from the hospital as babies. We’ve always loved being around music and it was only a matter of time before we picked up instruments for ourselves!

I (Mia) play drums! I (Sydney) sing and play guitar and piano!

On stage, never. But when we were starting out writing with other producers and songwriters we were always so nervous because it wasn’t something we were used to! Now that we’ve had so much practice it’s like second nature to us and the nerves are gone!

Tell us about your new single “I Don’t Wanna Talk About Me?”

We wrote it during one of the first sessions after leaving our Label. The producer started playing these dreamy euphoric chords and we loved them. We wanted to go from there and try to do something super out of the box for the chorus. We brought in a funky beat and started playing some chords on top. The chorus pretty much wrote itself from there! 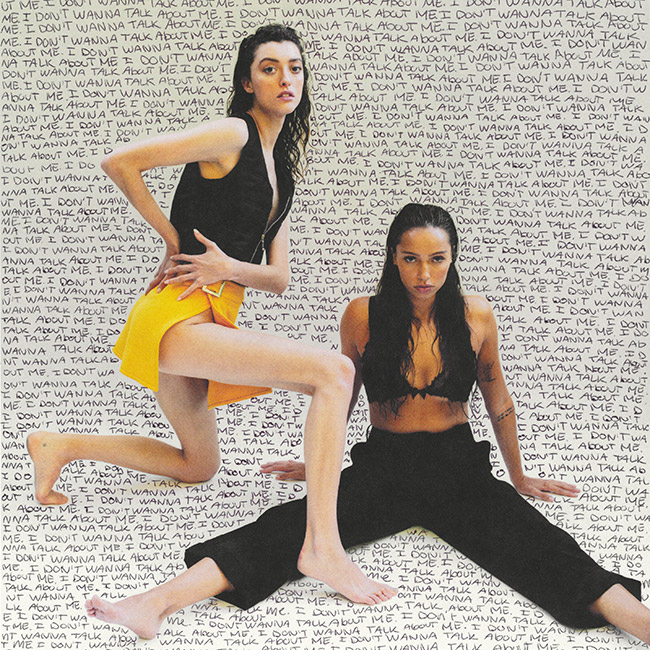 We loved the idea of the contrasting production so we thought, why not make the lyrics contrast too? The lyrics are supposed to show our two different moods. The verse is when we’re feeling super emotional and sad and the chorus is when we couldn’t care less and want to ignore all of our feelings.

Now tell us about your song in the movie “Ready or Not” staring Margot Robbie. That’s amazing!! Congrats 🙂

Thank you! We were actually in the studio tracking vocals for another song when our Producer asked if we would be down to track some vocals for a cover to see if it would work! Apparently they had been looking for the perfect vocalist to match the vibe of the movie and it turns out we fit the box! We tracked the vocals that day, sent them to the directors and ended up locking it in!

Did you guys have plans/concerts planned and cancelled because of COVID?

If so, have you done any online concerts or interaction with your fans? We unfortunately did have to cancel a few things due to COVID-19. We had a few shows lined up as well as SXSW, which was the first festival we had lined up in a long time! We’ve gotten into the live stream concerts a little bit since everything started, but it’s really not the same. The best part about it is that we get to interact with our fans between songs and it actually is pretty fun! But to be honest, nothing beats good old fashion live rock venues.

The best part for both of us is playing live shows. It’s where we’re our happiest and nothing in the world beats the rush. it’s also really rewarding knowing that the songs we write can reach other people. Nothing feels better than knowing that something you wrote hits someone else on a personal level. And like everything in life, there are some cons to this career path. It’s hard, ruthless, and sometimes really draining. But if we’re being honest, all of that is nothing compared to the rush we get when we write a song, play a show, or even just talk to someone about music.

What’s next for the Stereo Jane in the last months of 2020?

We plan on releasing a remix with a really really cool artist pretty soon! We’re also planning on releasing our next single in about a month! We’re super excited. As for life shows, hopefully soon!

My (Sydney) current favorite song is “Like A Stone” by Audiosoave. I always fluctuate between this one and a couple of other ones, but currently in life this is the song. This song has always hit me on so many different levels. Chris Cornell is one of my biggest influences and I listened to Audioslave a lot growing up. My (Mia) favorite song is Watermelon sugar by Harry styles. I’ve probably listened to that song a thousand times and have yet to get sick of it.

I personally would recommend The 7 habits Highly Effective People by Steven Covey. I (Mia) The Subtle Art of not giving a fuck by Mark Manson.

With everything going on in the world right now and especially with all of the BLM protests, we were extremely concerned about filming our music video and releasing “I don’t wanna talk about me.” We didn’t know if it was the right time to release music. We felt a little insensitive focusing on something other than this huge movement that was taking place before our eyes. We ended up pushing back the video and the release date because we felt it was the right thing to do. We spent a lot of our time signing petitions and spreading the word as much as we could.

I (Sydney) am really into cooking and holistic wellness. It’s something super important to me and I definitely plan on opening my own restaurant one day! I (Mia) also model! It’s been a great way to meet people and work for brands that I love!

(Sydney) I would’ve loved to meet Aretha Franklin. She was one of my big idols growing up and she inspired me to have the big voice I have today. I (Mia) would love to have met Heath Ledger… because I mean come on, look at him!

A typical day usually consists of sessions, photo shoots, brainstorming… it all has to do with what we have going on that week! We’re rehearsing a lot and constantly coming up with photo shoot ideas for songs!

I (Sydney) am extremely stubborn and once I have my mind set to something I won’t stop until it’s done. This is also my downfall sometimes though! oops! I (Mia) am very empathetic. I care deeply about the people around me and would do anything for them.

My (Sydney) perfect Sunday consists of waking up late, making some good breakfast, going outside to walk in nature, and listening to Bahamas. (Mia) painting outside and playing with my pup.

My (Sydney) go to karaoke song is always respect by Aretha Franklin! Mine (Mia) is Mr. Brightside. Always a crowd pleaser.

Happiness is the people you surround yourself with. It has nothing to do with work or money or materialistic things. It’s surrounding yourself with people who make you laugh, cry, love, and believe in you.

Yes! We support a few but to name some, The Black Lives Matter Foundation and The Planned Parenthood Action Fund are two great ones!

I (Sydney) love overnight oats with protein powder, pumpkin seeds, sunflower seeds, and blueberries! I eat it every morning! I (Mia) love a veggie grain bowl

How do you see yourself in five years?

Touring. That’s all we ever wanted to do since we were kids! When all of this Covid madness is over that’s what we want to be doing!

Mine (Sydney) is edgy chic. I love black white and red and those are pretty much the only colors you see me wearing! I’m obsessed with leather. Mine (Mia) is pretty much all vintage. I like mixing 70’s and 90’s. I can’t remember the last time I bought something new.

Social media is a blessing and a curse. On one hand, it’s super beneficial to people like us who use it for our career. It’s also an amazing way to keep in touch with old friends and family. Unfortunately, it comes along with a lot of bad side effects. We’ve both caught ourselves picking apart our insecurities because of all of the flawless people we see on the internet. Of course most of it isn’t even real, but it’s hard not to feel bad sometimes. we find that we feel a lot better when we put our phones down for a little while and connect with the real world.

Where can we find you?

We are @stereojane on all our social media and music platforms. Follow and engage with us, we love talking to our fans!