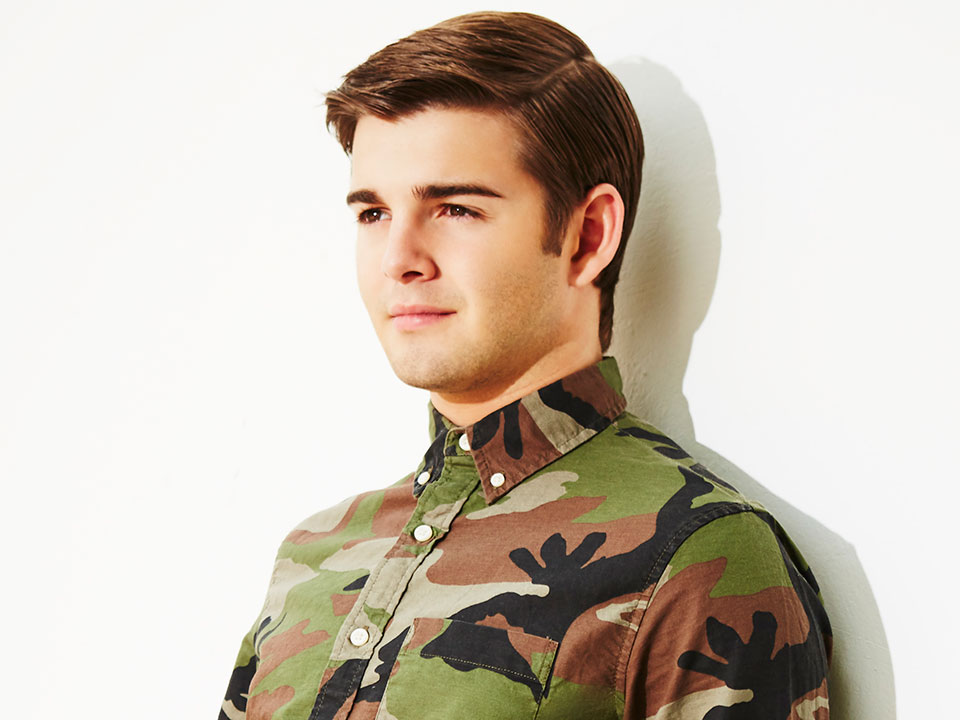 Insightful, lighthearted, musically inclined, and passionate about acting are all ways that Jack could be described. Nominated in 2014 and 2015 for “Best Actor” at the Nickelodeon Kids Choice Awards, Jack is a heartthrob on the rise. He can currently be seen starring on Nickelodeon’s hit series “The Thundermans.” Created by Jed Spingarn, the show revolves around a suburban family with superpowers. Parents Barb and Hank have recently retired their powers, while twins Phoebe and Max are just learning to use them. Jack plays Max, the beloved black sheep of the family and aspiring super villain.

In addition to “The Thundermans” Jack can next be seen appearing in the third installment of SYFY’s pop culture phenomenon SHARKNADO 3. Set to premiere July 22, 2015, the film follows killer sharks as they strike from Washington D.C. to Orlando, Jack will play Billy, the boyfriend of Ian Ziering’s daughter. Last summer, SHARKNADO 2 became SyFy’s biggest original movie ever, with 3.9 million total viewers.

Aside from his work on his hit Nickelodeon series and dodging killer sharks, Jack has also made his mark in the independent feature world. In January 2015 it was announced that he had joined the cast of indie THOSE LEFT BEHIND, also starring Daphne Zuniga (“Melrose Place”), Michael Hogan (“Battlestar Galactica”), Debra Mooney (“Everwood”) and Coby McLaughlin (“Parenthood”). Upon returning to her childhood home with her son to see her ailing mother, Shelly (Zuniga) must confront the demons of her past in order to move on with her life. A beautiful story about family, loss, young love and reconciliation. Jack will play Shelly’s son Noah, who takes his girlfriend along on the trip to his grandmother’s home. Though he’s eager to enjoy the summer with her, he remains sensitive to his mother’s pain.

On the music front, Jack has achieved accidental YouTube success, boasting over 5.1 million video views on his account, and growing.

Tell us about you

I’m just a guy doing my best to work in LA! I moved here from Florida a few years ago to pursue acting and have been here ever since!

My brothers were in to acting and performing arts so that’s how I first became interested. I started out with theatre in Orlando and loved it and knew this was something I wanted to do. Eventually, I moved out to LA with my mom to give acting a shot and I was lucky enough to book something!

In Los Angeles my first role was an episode of “Bucket and Skinner’s Epic Adventures”.

I think working with the cast of Undatable would be sweet. I love that show and think they would all be pretty fun to act along side.

Right now, I’m loving Charlie Cox on Daredevil so I would have to go with him. It’s such a great show and he is amazing in it.

How did you find out about The Thundermans?

I first found out about the show from my agent. I was super excited to audition eventually get the part because ‘Max’ has been a lot of fun to play.

Tell us about your character Max in “The Thundermans”

Max is the black sheep of the family. While everyone else wants to be heroes, Max is a rebel and dreams of becoming a super-villain.

Is it fun play a superhero?

Yes!! Playing bad is always great too because it is a little different than your average super hero.

Ok so now tell us about Billy in Sharknado 3?

Billy is just a normal kid at the park who meets a beautiful girl and is going about his business. Then the NADO happens and everything changes! It was a super fun and crazy role to play and film to be a part of.

What do you think is the success about this movie?

I think people are attracted to the craziness and the unpredictability. And this one will not disappoint!

Now about the music, do you still sing?

Yea!! I just don’t really post much right now since we are so busy with Thundermans. But hopefully I will start back after the series because I am excited to show everyone what I have been up to.

What do you like to do when have some free time?

Chill with friends, go to the beach, and snowboard in the winter.

A normal work day either consists of hanging out and filming on set of “The Thundermans” or random meetings I have to go to. If I don’t have to work you will find me hanging out with my friends like any normal teenager.

Do you practice any sport? Or how do you stay fit?

I like to work out when I have time and we also do a lot of stunt training for the show, so that definitely helps us stay in shape and is a lot of fun!

My family and friends.

Right now my plans are just to audition, audition audition once “The Thundermans” wraps!