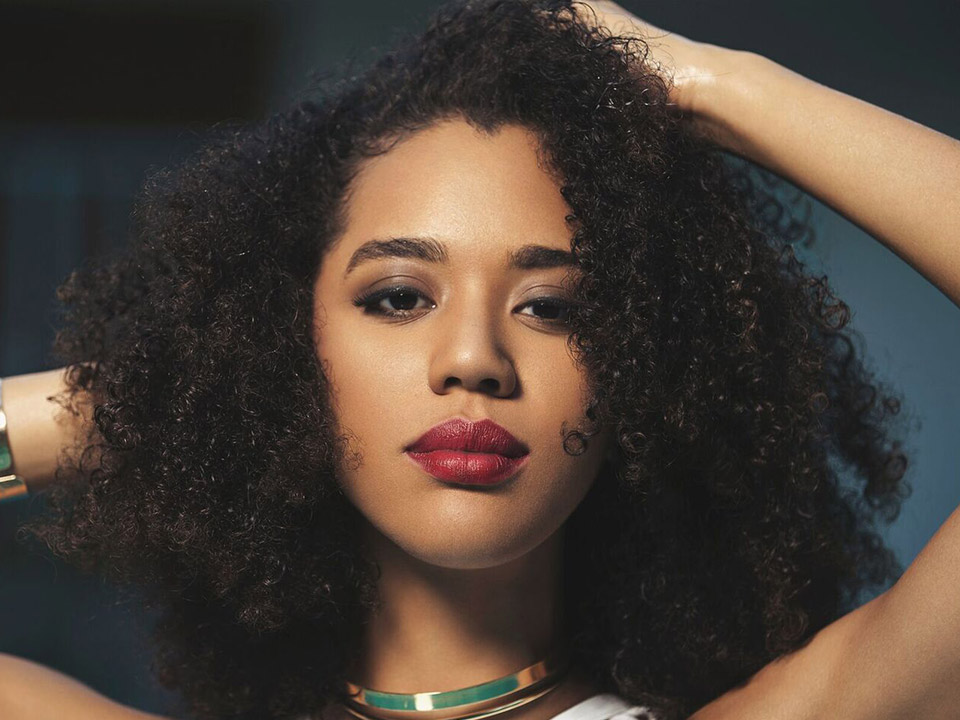 Raised in Springfield, Oregon, Jasmin is a multitalented performer, a tinkerer of instruments including the guitar, piano and violin, and a student of ASL. Jasmin is a proud alum of New York’s CAP21 Conservatory for their prestigious summer musical theatre intensive as well as the Los Angeles ABC Diversity Showcase. She currently lives in Los Angeles, where she studies acting at Lonsdale Smith Studios, and voice with Bob Garrett. In addition to acting, Jasmin is passionate about supporting the charity Peace Over Violence and is a monthly contributor to classical KUSC.

Jasmin will recur until the end of the season of ‘Stitchers’ as “Nina”, a well-versed fangirl who works at a comic book store and strikes up a “hot nerdy flirtation” with a member of the Stitchers team. Recently Jasmin was seen in HBO’s drama series ‘The Leftovers’. The series takes place three years after a global event called the “Sudden Departure”, which caused the inexplicable disappearance of 140 million people, 2% of the world’s population. Following that event, mainstream religions declined and a number of cults emerged with one named the Guilty Remnant being the most important. The story focused primarily on the Garvey family, played by Justin Theroux and Amy Brenneman, and their acquaintances in the fictional town of Mapleton, New York. Jasmin played “Evie Murphy”, Erika (Regina King) and John’s (Kevin Carroll) teenage daughter, who are the Garveys’ neighbors in Jarden, Texas.

Hi Jasmin please tell us a little about you?

Hey! I’m Jasmin! My middle name, Savoy is a brand of toilet paper, but my mom chose it because it is a family name. Prior to that she had planned to name me Jasmin Nicole, but when she was in the hospital giving birth, she heard another parent chastise her daughter, saying “Jasmine Nicole!” So she changed her mind on the spot. So random, right? I’m feeling random today. Other random facts: I’ve been obsessed with eating cherry tomatoes dipped in hummus lately. And I love lavender bath salts.

Many of my earliest memories involve acting and performing. I loved to perform. I was constantly making up songs, stories and dances and forcing everyone – from friends and family to strangers at Safeway – to endure them. My first public speaking role was as “Betsy Ross” in the show “Jail House Rock” at Twin Rivers Baptist Church in Springfield, Oregon. I was five yeas old. And I still remember every lyric to my show stopping song.

First, I read the script without any ideas – which is hard to do. To sit down and let the story wash over me without getting my ego involved and just take it as it is. Next, I analyze the script and make a list of every single thing that I can relate to about the character/world. “Her relationship with this person is just like my relationship with (insert name) in my real life.” Or “She’s a nerd about comic books and I’m a nerd about Broadway.” I acknowledge everything that I can easily relate to, and then fill in any blanks with imagination and research. I combine the two until they become seamless memories in my mind – until it wouldn’t be clear to someone who was stitching into my mind which memories are mine and which ones belong to my character (see what I did there?). Finally, I memorize my lines, walk on set, let all of that go, and simply rely on instinct and what I’m feeling in the moment.

Tell us about your character in “Stitchers”?

Nina is a confident nerd. She loves all things sci-fi, comic books and video games, and she takes pride in that. She’s funny, open, and really good at winning arguments.

What the show is about?

“A young woman is recruited into a secret government agency to be “stitched” into the minds of the recently deceased, using their memories to investigate murders.” (As stolen from IMDB). It’s really cool!

What’s your favorite part of working on this project?

I loved all of the research that came with playing Nina. I knew next to nothing about the comic book world and nerd culture. I have a rule that I will not say a line unless I know what it means, so , I looked up any reference that Nina made to something I didn’t know. In turn, I learned a lot! I also loved working with the cast. Everyone is so lovely and fun. Kyle and I would sing show tunes together. I drove him crazy singing “Love Is An Open Door” from Frozen, until he gave in and sang with me. Little moments like that are my favorites.

Also you were part of HBO’s drama series “The Leftovers”. Tell us about it?

The Leftovers is a really cool show. One of my favorite shows to watch, and among my favorite shows to work on to date. It’s set in a world that is exactly the same as ours, except a couple years ago (at the start of season 1), there was a single moment where 2% of the world’s population simultaneously disappeared, without an explanation. Everyone left behind, the leftovers, are forced to confront their grief and humanity, and are never given an answer as to what happened. It’s really a show about family and dealing with grief. Some people run to religion, some commit suicide, some pretend it never happened, some fall apart. But everyone is grieving. It’s very compelling and reminds you to hug your loved ones tight, and not take life for granted.

I will play Mimi in RENT. And I would love to play Vanessa in In The Heights.

What advice would you give to those who want to be in this business?

Don’t take no for an answer. To every one “yes” you will hear one hundred “no”. Use it as fuel. Let all of those rejections inspire you to work harder. LAUGH. You must laugh. At yourself, at the business, at how truly bizarre this life is. Live life. Don’t get so caught up in the study of acting that you forgo the truest study of acting – living life. Be in the studio studying, yes, but also take vacations, fall in love, explore the world. Don’t keep yourself in a box. And if you stop having fun, quit.

What other projects you are working on?

I just shot a sketch with Scott Aukerman for Comedy Bang! Bang!, which I am really excited for everyone to see! And a few films: “Before You Say I Do” directed by Kevin Conner. I played a nerdy girl in that as well, and it was a lot of fun – one of my largest roles in a film to date! That will come out on PixL sometime this year! “Newly Single” directed by Adam Christian Clark and “LANE: 1974” directed by S.J. Chiro.

Music, kisses and my glasses.

KALE! I’m sorry but it’s true. I love kale so much. I love to saute it in a little bit of oil, with lots of water and sliced apples. THAT’S IT! My mom made it up. It’s so juicy and delicious. Also great for adding to smoothies.

Anything chocolate or cheese. Ooohhh now I want to try a chocolate and cheese sandwich. Mmm.

There is no such thing as a typical day in my world. Ha! But in general, I wake up around 10 am, make myself some breakfast, meditate and journal until about 11 am. Then I start working for the day, which can be learning sheet music, or analyzing a script. Around 3 I head out for auditions. In the evening I see a friend’s show, or go to a reading. Talk to my mom or my best friend on the phone. Then read until I fall asleep! Somewhere in there I have a melt down, probably because I saw a really cute puppy or a tender father/daughter moment. Somewhere else in there I questioned the meaning of life. And I took a moment to be thankful that I am at a place where I get to do what I love every single day.

I have a tattoo… it is a square on my right ankle. My best friend from high school, Jessica and I got them together for Christmas. Now she’ll always be a part of me. It was my first tattoo, too!

I love classical music, Broadway sound tracks, Jazz, rap, hip hop, pretty much anything except scream-o, and men singing country. Isn’t that weird? I love females singing country, but for some reason whenever men sing country it comes off as whiney to me and annoys me badly.

I support a charity in LA called Peace Over Violence. It’s a non profit that offers healing support and resources to survivors of abuse.

This will sound insane… its 9 am. I wake up to the sound of RAIN and thunder with the person I love cuddled next to me. We go on a run in the rain. We come back, dry off, start a fire (because in my perfect Sunday we live in a cabin in rainy Oregon) and make a delicious breakfast while enjoying English breakfast tea with cream and sugar. Eat breakfast, nap from 11 am to 12 pm. Then we spend the rest of the day watching the rain, drinking soup and reading by the fire. Around 7 we play a board game, watch a movie, have Thai food delivered and are asleep by 10.

Do you have any other hobbies?

What do you think of the Social Media?

I love it. This is only a RECENT opinion though. Until months ago I deeply hated it because I thought it was tearing us all apart, disguised as bringing us all together. What I’ve come to view it as is a tool – I can use this to connect with my family, friends and fans, and it’s up to me to use that to a healthy extent or an unhealthy extent.

Favorite Quote: “I am not a cosmic orphan. I have no reason to be timid.” From The Actor’s Vow by Elia Kazan

Favorite Celebrity Crush: Simba. Does he count? If not, Alfred Enoch. *sigh*

Favorite Movie: What A Girl Wants starring Amanda Bynes, and Stand By Me. (I’m so bad at picking just one thing. Have you noticed?)