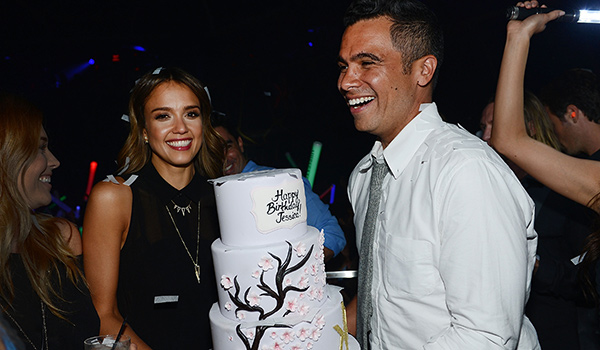 Last night, (Friday, May 9) partygoers were in for at treat at Hakkasan Las Vegas Restaurant and Nightclub at MGM Grand as the stunning Award-winning actress Jessica Alba was spotted celebrating her birthday at the iconic destination. The A-list beauty enjoyed an eventful night out as husband Cash Warren and close friends including best friend and Co-President of Baby2Baby Kelly Sawyer, Who What Wear founder Katherine Power, good friend and celebrity hairstylist Jen Atkin, makeup artist and childhood friend Lauren Andersen, The Honest Company Co-Founder Brian Lee and wife Mira Lee and the cast from Alba’s most recent movie venture “The Veil” were all by her side.

Kicking off her night, the stylish Alba was seen entering Hakkasan Restaurant just after 11 p.m. dressed head to toe in designer wear including a black Keepsake blouse, black Balmain pants, Prada shoes and fashionably accessorized with House of Harlow, Hilary Tisch and Jennifer Meyer jewelry. Upon arrival, the energetic group was escorted to the second level private dining room for an exclusive VIP culinary experience.  Indulging on a number of Hakkasan specialty gluten free selections, the party was in good spirits as they laughed, engaged in conversation and sipped on Hakkasan signature cocktails. Immediately following dinner, Alba was ready to continue her celebration and led her party to the fourth level of the nightlife mecca where she took a seat at her VIP table located on the main stage. As the star settled into her booth, she was greeted by Hakkasan Nightclub’s gorgeous cocktail waitresses and as confetti burst into the air they presented her with a lovely three-tiered lavender birthday cake adorned with a number of pink cherry blossoms. Filled with excitement, the birthday girl jumped out of her seat to get a closer look at the cake and was joined by her adoring husband as they posed for pictures.

As the night went on, Alba and her guests danced to the beats of Resident DJ Calvin Harris before making her way out of the nightspot around 3 a.m.