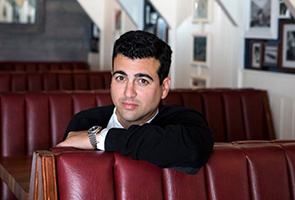 How did you get your start in this business?

I started an events/promotion company in my freshman year at USC and it grew pretty big.  Everything i do today stems from what I learned creating that business.

What is the vibe of your locations and what makes them different?

The only vibe that runs throughout all of my places is warmth.  They all are inviting and have personal touches which makes people want to stay and come back frequently.  Aside from that, each venue has a distinct and unique concept and decor and I do that on purpose.

What is the secret to open successful places in LA?

Tell us about the Shore Bar?

SHOREbar started out as a passion project for me.  I grew up in west los angeles and all of my close friends and family live in the area.  So when the opportunity came for me to take over a dive bar and create a whole new concept I jumped at it.  The first thing that was most important was the people behind the place financially are two guys (Mark Verge and Kevin Miller) who i admire and respect business wise (they own the company westsiderentals.com as well as numerous other businesses).  I then created a concept that was supposed to be like a Martha’s vineyard type of beach house and the key separating factor was that it would have a members only room that would would be like a country club for locals.

Tell us about the concept for the Bootsy Bellows?

The Bootsy Bellows concept came about from David Arquette and me.  Prior to coming up with the name etc. I met with my friend David Arquette about creating a new concept that L.A. had never seen.  The purpose was to provide tons of entertainment going at all times in addition to being a nightclub.  David had a passion for marionnettes and is also one of the best entertainers/showmen I have ever seen.  In addition to all of that he shares the same love of hospitality and people as I do so we created a concept that became Bootsy Bellows.  The overall theme was to be our version of the Rat Pack.  David is at Bootsys every night either performing himself with puppets or overseeing the puppeteers as well as greeting all of the tables and customers.

And the most recent one Hooray Henry’s, what was your idea for creating this London theme venue?

I have a very close group of fun and creative friends that live in L.A. now but are from London.  The more I was around them the more I realized that I needed to cater a concept to them.  Since I had a love for the London architecture and culture I decided to create a version of an old London flat with a club flare to it; hence, hooray henry’s.

Whats next for you? Now lets talk a little bit about yourself

Where did you come from?

It varies quite a bit but I am usually up at 8am and do most of my emails in the morning.  I do most of the business side of meetings all day up until around 4pm.  I usually take 2 hours off and then go to SHOREbar for the opening (which is at 7pm) and have a dinner or drinks meeting (usually with a client) and then go to Bootsy Bellows or Hooray Henry’s (depending on which one is open)…or if it is a saturday then I am at all 3 venues.

Tell us something the people don’t know about you?

I am highly supertitious (some people think it is OCD)….I have to do things a certain way each time.

If its not your venues, what other places are your favorites and why?

Chateau Marmont and Craig’s.  I lvoe them because it is like a family.

Book: Catcher in the rye