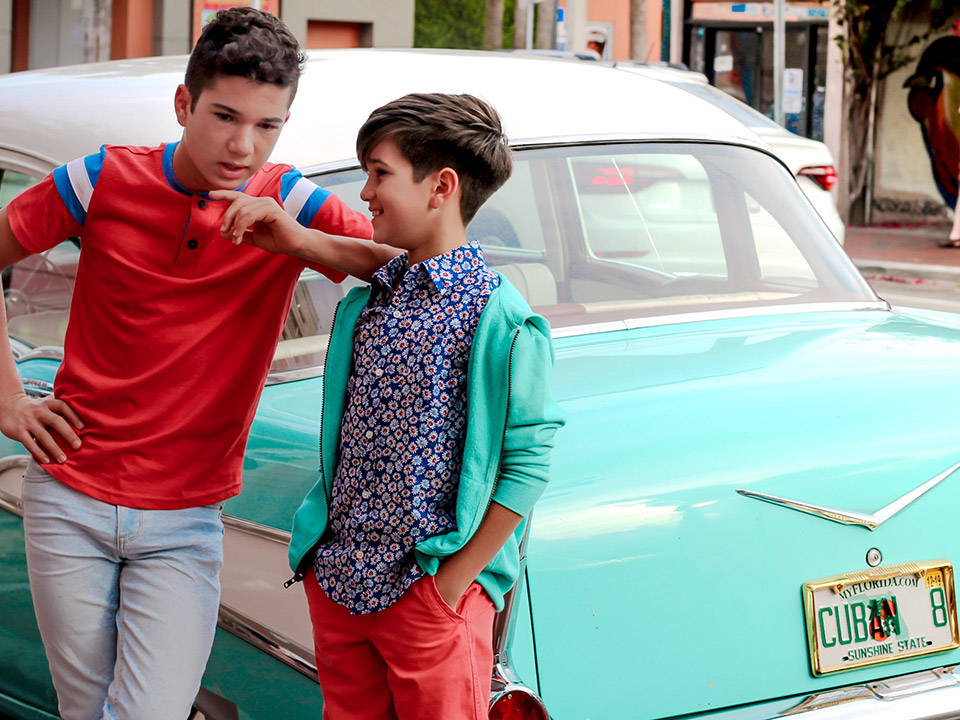 Stepping up to the plate in the upcoming controversial and highly comedic MLB documentary, SCREWBALL, brothers Bryan and Jonathan Blanco are the real MVP’s in their breakthrough roles that captivated audiences at the Toronto Film Festival. Now, the boys plan to knock it out of the park as the film gears towards the theatrical release in April.

Director Billy Corben (“Dawg Fight”) delivers yet another thought-provoking comedy documentary, which premiered with rave reviews. Based on the historical events surrounding doping in the MLB, SCREWBALL offers a new version of the scandal that rocked South Florida and the world in 2014. Referred to as a cross between “The Little Rascals” and “The Thin Blue Line,” Corben delivers a child-cast “Drunk History-style,” recreation told from the perspective of Anthony Bosch (portrayed by Bryan Blanco), the owner of the Biogenesis clinic at the center of the scandal. Jonathan Blanco stars as Pete Carbone, Bosch’s friend from long Island, who allegedly acted as a middleman and suggested leaking the files.

It’s quite the story. We used to compete heavily nationwide in martial arts. It was a really big expense, so my mom jokingly suggested we get jobs.

What did your family say when you guys wanted to be in the acting business?

My family is 100% supportive of it. My dad was a baseball player growing up, but he took drama in middle school and he says he won a thespian award at the county fair. He is always proud of us and of course, my mom too.

Really anything energetic and emphatic. I love those type of roles because I can relate a lot to them and they become a good way to expend my physical and emotional energy in a different way.

Tell us about highly comedic MLB documentary “SCREWBALL,” and your roles as Anthony Bosch and Pete Carbone?

Screwball follows fake doctor Tony Bosch as he illegally sells performance enhancing drugs to professional, college, and high school athletes. Pete Carbone is this sort of Mafioso-type tanning salon owner who went into business with Bosch through his tanning salons.

Are you guys Baseball fans?

Yes! I was born two weeks before Opening Day and my mom was so sad she couldn’t go to the Marlins game. She took me for the tailgating with my dad and his friends and there’s a picture somewhere of me in my first baseball shirt. My dad played baseball growing up and my grandpa was a baseball player in Cuba.

I’m a newer actor myself, so this is advice I remind myself of: Have confidence. Don’t be scared to talk to directors or casting directors when needed and always be prepared.

I have been in countless commercials over the years. Most memorably, though, a Disney commercial that aired during the New Year’s Eve countdown of last year (17-18).

“Don’t let up.” What that means for me is a reminder to give 100% to anything I decide to do. Sometimes things may come easy and it can be hard to still push yourself, but at the end of the day, you’re only cheating yourself.

We live on a pretty cool block with a few kids my age, so we play outside a lot. Or, I’ll work on song lyrics and work on my music, watch YouTube, read books and sometimes play on my Xbox. I’m not a very big gamer. I can always find something to do.

Going to a rap concert. Definitely. That and SCUBA diving.

So, I had a hard time with this question. I asked my friend TJ and this is what he said: “He’s interesting because he can turn nothing into something. He can get a really boring beat and make it cool. He has a passion for music. He’s creative and creative with his music.”

NO HOMEWORK!!! A day where I can just relax and hang out, without having to worry about deadlines. Go to the park with my friends, or just binge watch a show.

What’s next for the Blanco brothers in 2019?

I’m open to anything. Right now, I’m taking opportunities as they come, working at acting and music and being better at both while I’m in between work.

I can solve a Rubik’s Cube. I saw Justin Bieber can solve one super-fast in an episode of Carpool Karaoke, so I’m trying to beat his time.

I listen to everything. My parents grew up in the 80s and 90s, so they make sure we listen to their era and their parent’s era, but my favorite are hip-hop and rock.

Dwayne Wade of The Miami Heat. The way he works hard for his family, the way he showed up for the Parkland community after the mass shooting last year and his love for his city -my city- make me want to sit down and have a conversation with him. And hopefully play a game of basketball.

This is a tough question. My generation loves social media and I’m definitely on it and love it too, but I try to remember that we are all so much more than how many likes and views we get and to keep the focus on what you’re doing every day to be better, not what someone else is doing.

Do you support any charity or have any philanthropic interests?

Travel destination: Las Vegas has been by far my most favorite trip. I really want to go to Japan. I love martial arts, anime and sushi. Japan is the home for all of those.

Actor/Actress: Kevin Hart or Dwayne Johnson. How about both?

Sports team: The Miami Dolphins and the Miami Heat.