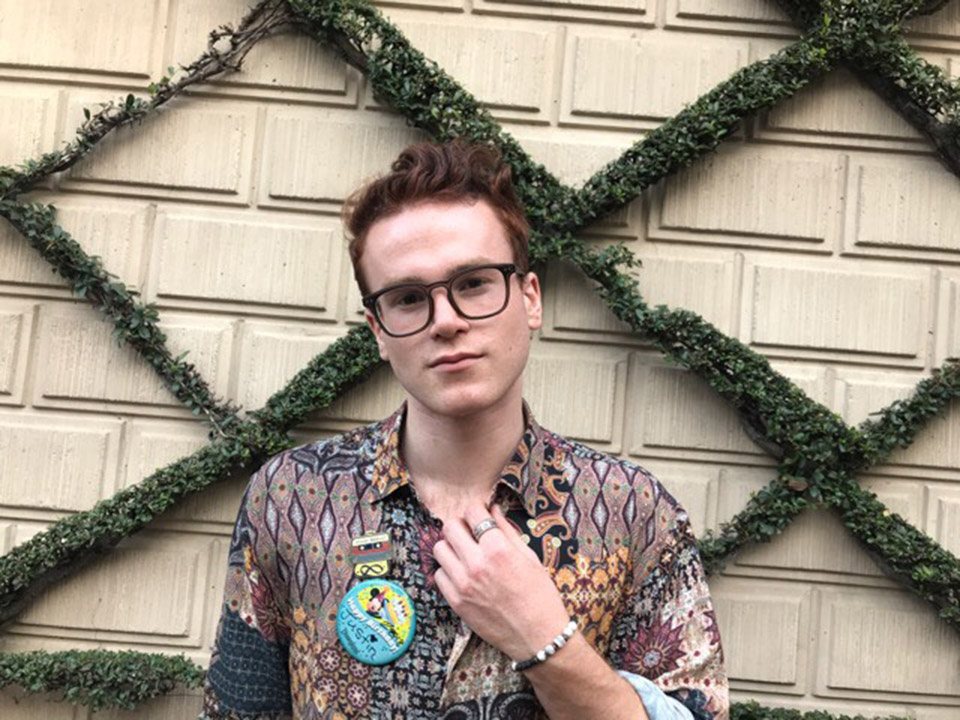 Currently you can see Justin as Everett in “Devil’s Whisper.”

My biggest supporters are my mother Jennifer, my manager Nita, and my girlfriend Serena.

How did you get started in the industry? What was your first acting role?

I got started in acting through the sport Indoor Skydiving. When I was little, my sister Kayla and I were the only kids competing against a bunch of adult skydivers. We appeared on ABC World News and The Ellen DeGeneres Show, and in The Wall Street Journal and many other news media outlets for being pioneers for a new generation of youth to get involved in a sport that, before wind-tunnels, used to be only enjoyed by adults. iCarly flew my sister and I out to Hollywood to be in the iCarly Awards Episode as “Best Skydivers In a Wind-Tunnel-Type-Thingy”, and that was my first taste of the world of acting. After we flew home to Denver, I went to an open call for Coast-To-Coast talent agency and read a commercial line in front of agents. They reached out and said they wanted to meet with me so I flew out to LA when I was 10 for a summer to test the waters, and I never moved back to Colorado.

Tell us about “Devil’s Whisper,” and your role as Everett?

Devil’s Whisper is a horror film that deals with the concepts of childhood trauma and possession. Alex, the lead character, acquires a necklace that has been in the family for a long time, and weird things begin to happen. Everett is one of three of Alex’s best friends. I would definitely say Everett is a skeptic and a punk.

One day on set, it was just me, two stunt doubles, and the film crew working on a stunt sequence. I don’t want to spoil what happens but what I can say is that the final footage makes me look like a much better skateboarder than I really am!

Some recent TV credits are: The Fosters (FREEFORM), The Goldbergs (ABC), Lady Dynamite (NETFLIX), and Trophy wife (ABC). Film credits you might recognize are Standing Up and The Muppets Movie.

I like Leonardo DiCaprio, Denzel Washington, and Matt Damon because those three are always fortunate enough to have the juiciest dialogue to sink their teeth in to and it’s inspiring to watch them make choices and execute scenes.

I can’t leave my house without 1) My longboard 2) My Headphones 3) Keysphonewallet? That’s a word right?

My idea of a perfect Sunday would be waking up in a snowy cabin, spending the day snowboarding, and then the evening making music.

A normal day in my life involves juggling school, acting, and work. Usually I don’t know when auditions will be until the week of the casting session, so every week is up in the air. Between auditions, a full load at school, and working for my manager part time, I struggle to find time for my girlfriend and my family, but somehow I fit it in there.

Without a doubt my favorite healthy food would be Acai Bowls.

My favorite cheat food is In-N-Out.

In five years I hope to be working consistently on both sides of the camera, as and actor and as a film composer.

I co-founded a charity with my sister called The Shoe Crew. Since 2012, The Shoe Crew has collected over 7,500 pair of brand new pair of shoes for underprivileged youth in Los Angeles.

Favorite Music: Picking a favorite music is nearly impossible for me because I try and absorb and appreciate anything I can get my hands on.

I grew up listening to classic rock, and then got into punk, alternative, and hardcore music, and now I’m a Film Composition Student at CSUN. I love jazz, hip hop, funkadelic, tribal chants, Bach, you name it.

Quote: ”Fail Forward” – Will Smith and “Do not go where the path may lead, go instead where there is no path and build a trail” – Ralph Waldo Emerson.

Sports Team: Denver Broncos? I kind of stopped watching sports this year to be honest.