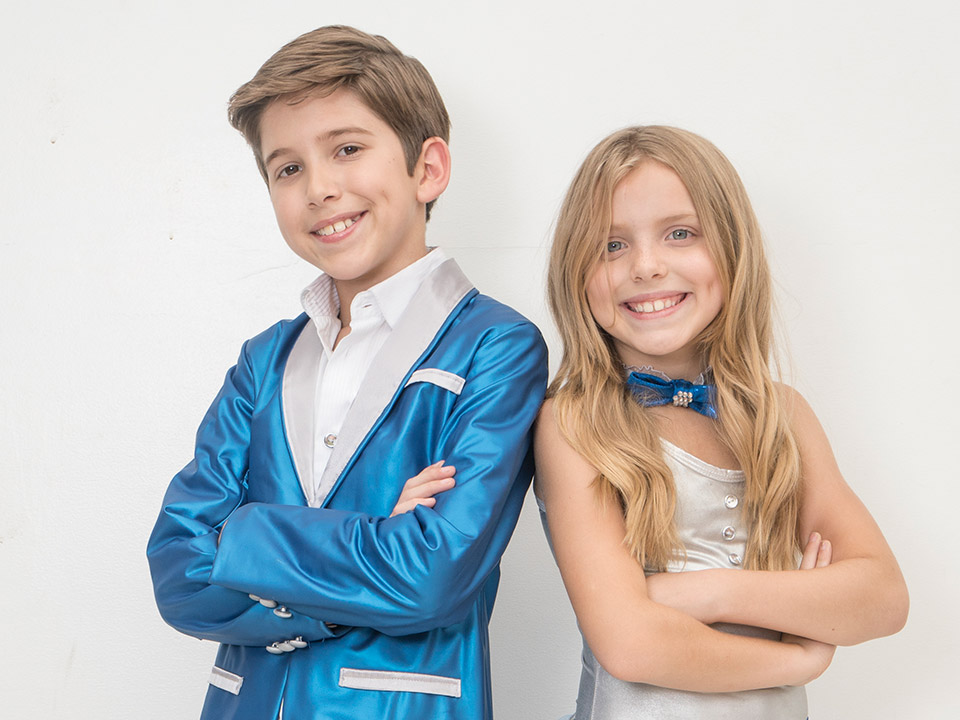 Our interview with young dynamic magicians duo Kadan Bart Rockett and her sister Brooklyn who were voted by America to reach the semi finals of the “America’s Got Talent” this past season. Kadan shocked judges Heidi Klum, Mel B., Howie Mandel and Simon Cowell who called the 10-year-old a “real life Harry Potter,” after sawing his younger sister in half during his audition.

Kadan has conquered the big screen where he starred alongside Keri Russell and J.K. Simmons in Dimension Film’s supernatural thriller DARK SKIES. He has made over 1,000 live appearances and starred in the live stage production of Cirque: Illusions of Grandeur.

Hi Kadan, please tell us a little about you?

I think I’m a pretty normal kid when people meet me in person.  I just happen to do some pretty crazy extraordinary things. Most people who meet me tell me that my vocabulary is way beyond my years and that they feel like they are talking to an adult. But other than that, I’m pretty much like a regular kid.

How did you get involved in magic?

My first inspiration was my dad, but since then I have been inspired by so many. I read a lot of books, watched videos and just really got out there and started trying things. That’s the best way to learn, just get out there and start trying to make things happen.  When I make mistakes, I learn from them and that helps me grow.

What is your next goal as a magician?

I have lots of goals. I would like to perform at the White House, appear on The Tonight Show and I would really like to do Broadway one day. We are working on a scripted television series right now that looks like it will happen later this year and I think that the idea could eventually be developed into a Broadway show. Overall, I really like the mix of doing TV, Film and Live Theater and think that what we can work on all of them.

Did you get nervous performing at the stage?

I don’t really get nervous.  I actually feel comfortable on stage.  Being in front of people has never been something that I was afraid of.  My parents brought me on stage at their 1,000 seat, Branson, MO theater when I was only 1 day old and I have pretty much grown up on stage all my life.

And how is working along your sister Brooklyn?

Overall, my Sister is great.  She really adds a lot to our act. Traveling with her can be annoying sometimes, but we don’t really fight or anything. Only an occasional argument over the armrest or who is sitting where but it doesn’t usually last very long.  I think we work together pretty well and are very close because of what we do.

What do you think of the Judges of AGT?

I thought the judges were really nice overall.  We had met Mr. Howie before when I was younger and had gotten to know him a little bit so we were very comfortable seeing him again.  I had appeared on Heidi Klum’s TV Show, “Seriously Funny Kids” that she did for the LIFETIME Network several years back.  Only Mel B & Mr. Simon were new for us, but both were really nice. We were especially surprised at how much Mr. Simon liked us. That was nice.

What other projects or shows you have been part of?

I’ve done 6 flips and working on my 7th this year.  I’m probably best known for my lead role in DARK SKIES where Keri Russell played my Mom.  I also did an episode of CBS RUSH HOUR, where I did my own stunts that I am pretty proud of.  I actually hung from a 25 story building during a kidnapping scene.  That was awesome!

What is your most difficult magic trick?

Usually whichever one I’m working on at the time.  It always seems difficult until I get it down. The most difficult one for me to perform, will probably surprise you.  It’s sawing my sister in half.  There is a lot that can go wrong on that one and I am in total control of making sure everything works properly.  It looks really simple when it is performed but to me, that is the one where I have the most pressure on me. I always breathe a sigh of relief when it’s over.

Find something you like to do and figure out a way to get paid for it, make the most of every single day you are given, and focus on all the good and not the negative that’s out there.

I like lots of different types of music. It’s always changing. “RIDE” by 21 Pilots is cool.  It’s a song I just listen to for fun.  A lot of my music I am listening to is for show ideas.  I have loved Christina Perri ever since I first met her.  She’s cool and really talented.  She’s worked really hard to get to where she is and I want to do the same.

I’m not sure there is a normal day. Every week has been bringing new things.  Sometimes we are traveling, sometimes doing TV or media appearances and sometimes we are setting up and performing our live show in theaters around the world.  If it’s a day off I would say, wake up, have breakfast, do school work online and then lunch.  I love to be creative and either make something with my Sister on video, edit it and produce a funny fake commercial or show.  We like doing stuff like that around the house.  I like making things out of cardboard boxes and items around the house.  That’s really how my magic started.  I sometimes play video games when I’m traveling and killing time on a flight.  I also really enjoy reading.

I play the piano and am pretty good.  I also have taken some violin & guitar lessons to familiarize myself with those instruments as well.

I like the fact that it allows us to keep in touch and stay connected to everyone.  I don’t like that sometimes people feel the need to pick apart everything you try to do.  I’m like, really?  Get a life.  I put my magic out there to entertain people and that’s it.  I hope we can also inspire other young kids to not be afraid to go for their dreams and dream big.

Movie:  Of course DARK SKIES because I’m in it, lol.  I love Harry Potter of course, and really any movie with lots of comedy.

Travel Destination:  We really liked Estonia.  It surprised us and we hope to go back again. It was like a magical fairytale land in real life.

Sports Team:  I don’t really watch sports at all!  I’ve played a little basketball and watched the finals before but overall I am not very sports oriented.

TV Show:  I don’t really watch TV very often.  Seriously on a plane or in a hotel is about the only time I watch.  Our lifestyle is just not one where we sit at home in front of a TV a lot.  I watch some shows online that I like such as:  The Profit on MSNBC, Shark Tank on ABC and shows like Gravity Falls & Lab Rats on Disney.  Nickelodeon has Henry Danger that my sister watches with me sometimes.