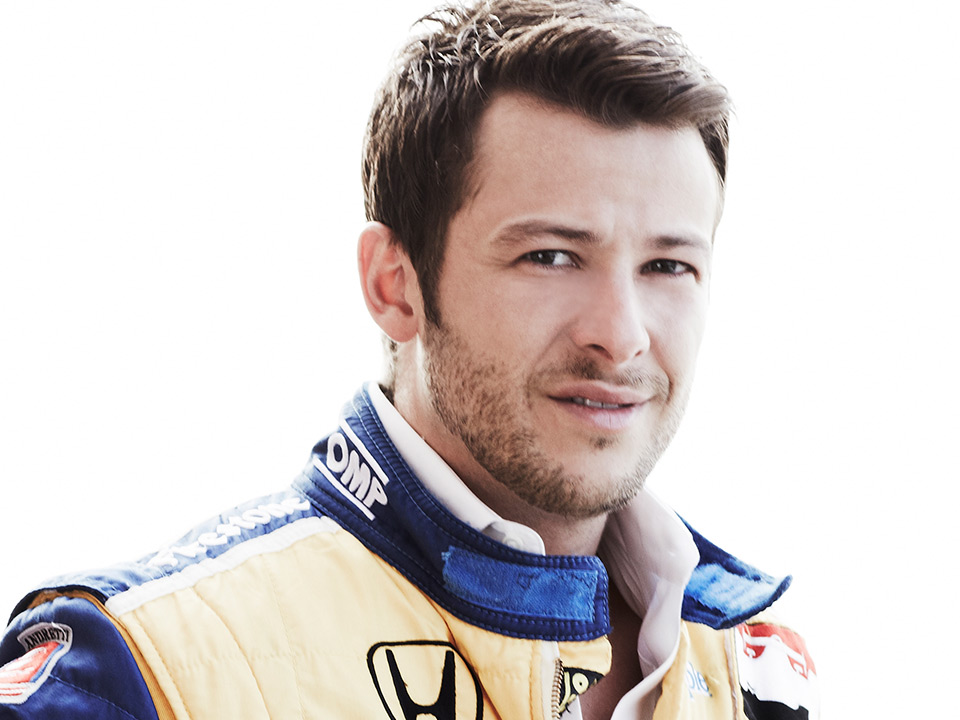 Marco is the third generation of racecar drivers from the famous Andretti Family. From Go-Kart Races in his younger years to becoming the youngest Indycar winner of a major open-wheel racing event in history (at the time), Andretti III has dedicated his life to victory on the track. We ask the speed demon himself what it’s like to train, race, and live like an Indycar fanatic.

You come from a family legacy of racing. When did you know that racing was what you wanted to do professionally?

I always hoped I would end up a driver, but it became a reality around age 10 when we started winning some races.

Did the local police get any kind of notice when you first earned your driver’s license?

No, but when I bought my dad’s house and moved back into town they lowered the speed limit on my road.

What are your favorite street cars to drive?

What songs are on your pre-race pump-up playlist?

Driving hundreds of miles an hour to slow into a turn has got to be a major strain of g-force. How do you physically train for races?

A lot of running/cardio, core exercises and I need to do yoga because I am the least flexible person out there.

For the less savvy, what are some of the major differences/challenges between an oval track and road track?

After nine seasons and a lifetime on the track, what are some of the most important lessons you’ve learned?

To never doubt myself. Confidence is a very important part of what we do, or anything someone does for that matter.

You went on vacation with Ludacris and Kevin Hart in the Caribbean in the off-season. How did you become friends with them? How do you know each other?

I met Kevin Hart at the Palms in Las Vegas, which was a former sponsor of mine. I met Luda when he came to my rookie Indy 500 in 2006, then again in Miami where we started kicking it.

Where else do you like to travel on vacation?

I love Miami in the states; I want my old condo back there! But the closest/easiest island getaway for me is pretty much anywhere in the Caribbean. My grandfather also owns a lake property of around 700 acres in the Poconos, which is a one hour drive north of my house. It’s a good getaway for a racecar driver to disconnect for a few days.

What is your drink of choice?

What is your dog Moodie’s favorite treat?

She wants to eat anything Marta and I eat; she waits for us to drop something.

How many hours a week do you practice on the track on average?

The test time is extremely limited because of cost. It can cost over 75k/day, so we only have about 6 test days per year aside from the race season.

You’ve raced at the Long Beach Grand Prix before and you’re gearing up to go again in April. What is the track like? Are there any major challenges in Long Beach?

Long Beach ranks #2 on my win list next to the Indy 500 because of my family history there. The major challenge is just simply the competition, although anywhere we go is very competitive. Overall, the track is a pretty normal street course with a lot of bumps and 90-degree corners. Long Beach has great seating for fans and normally has good weather, but I probably just jinxed us.

You had the opportunity to test the new Formula1 car in 2006 and 2007. What is it like to test a new car? That must have been quite an honor.

Yes, F1 is the cream of the crop in our sport. The biggest thing that surprised me was the braking. The acceleration was intense too, but it’s everything a driver wants!

How do you maintain your focus for races that last for hours on end?

Focus is a huge part of our sport; we can’t afford to lose focus for even a split second. Being physically fit helps the mental game a lot!

Dr Pepper/Snapple has sponsored you for over six years. What’s it like to have such a longstanding relationship with a sponsor like that?

It means the world to me. It is a very expensive sport and without people like them, we can’t do what we love. They have become family to me.

What hobbies do you maintain off of the racetrack?

Basketball with friends, tennis and running. I always try to stay as active as possible.

What is your favorite thing about Indycar racing as opposed to other kinds of races?

Our on-track product is amazing, our risk is very high (especially on the high speed ovals because of the open cockpit and open wheels), the amount of passing, the spec cars make the competition second to none, and I would argue the Verizon IndyCar series is as competitive as Formula1.

His last one was making fun of me tweeting my workouts. I have to tweet them because otherwise I didn’t do it, right?

What are your racing goals within the coming years and for the future?

An Indy 500 victory is very attainable as I have had 6 legitimate shots winning there already. I have led 7 out of 8 tries, and on the 8th I was taken out at the start. Also, an IndyCar title is a huge goal of mine. I was 5th last year, so I need to do 4 better to make that happen.

Any last thoughts for Naluda readers before you head back on the track?

Come to the races!!!