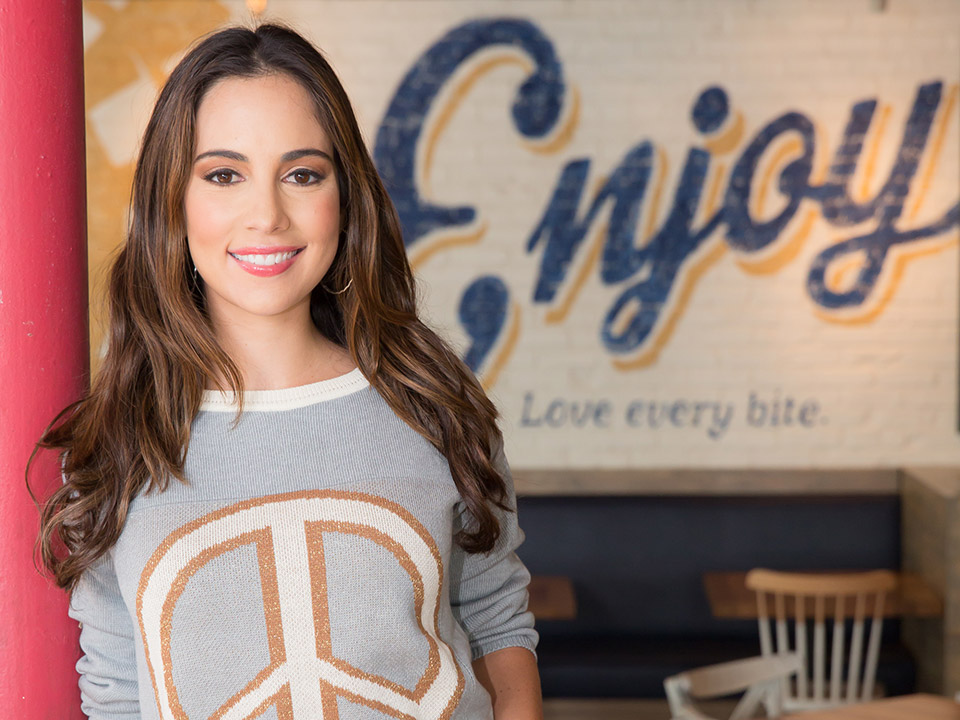 Check our interview with talented Award Winning TV Personality on Diversity & Activism Mariana Atencio who is a Peabody Award, Investigative Reporters and Editors Award, and Gracie Award-winning journalist, TED speaker, and news personality who covers domestic and international issues, doing breaking news and special reports MSNBC and NBC News. Known for combining in-studio work and high-profile interviews (Pope Francis, etc) with tenacious field reporting all over the world, Atencio continuously takes on important issues head-on and at ground zero. Whether it’s speaking with families separated at the border, reporting from the migrant caravan, or meeting with hurricane survivors in Puerto Rico, Atencio is always at the heart of breaking news.

The Huffington Post has called her a “breaking news sensation” and “our Latina Christiane Amanpour,” while her former Univision colleague Jorge Ramos called Mariana “the next-gen voice for Latinos breaking all barriers.” She was also named one of OK! Magazine’s “Most Successful People of 2017”

Atencio was part of the team at NBC News that helped break and drive the coverage of the migrant caravan of thousands of migrants seeking refuge in the US and the family separation crisis that ensued when the Trump Administration separated kids from their parents in the summer of 2018. She spent weeks along the border, constantly traveling to Mexico and back. Her live translations literally giving a voice to the refugees became a staple at the networks.

Please tell us a little about you.

A Latina immigrant, working hard for her dreams, finding her space in this great nation, without ever forgetting where she came from. A storyteller, trying to further understand human nature by giving people from all sides a voice. A woman trying to have it all, even if we can’t have it all at the same time, who will never cease to try.

My biggest supporter was my dad, mi Papi, my strong foundation. He passed away last year, which was probably the biggest challenge I’ve faced. I remember when I first confessed to him that I dreamed of being a journalist. He said: “Mari, I raised you to be whatever you want in life. I have given you and will continue to give you everything I can to develop that passion within you. If you want to be a journalist, I’ll support you unconditionally. But remember, nothing is ever free. You have to work hard to achieve what you want.”

Show up as yourself because everyone else is already taken.

When and how did you get started as a journalist?

As a 17-year-old who lived in Venezuela but happened to be in New York City on 9/11, I wanted to understand the motives and implications of such a horrific attack on a country that I admired so much. It was really hard for me to grasp the feelings of hatred and extremism that prompted this violence, so I watched the news and read all I could until I got the basic context and it was a “click” in my mind, like: I want to be the one giving the explanations, helping people form their opinions through my storytelling. Six years later, back in Venezuela, the shutdown of RCTV (one of the most important TV stations) made it clear that press freedom was something precious worth fighting for. The rest is history. Journalism is my passion.

What did you do or work before that?

When I decided to study journalism, it was a very dangerous profession in my corner of the world. Trying to please my parents I opted to work at an Ad Agency as a “safe option.” I was an account manager for a year, but I longed to be out on the streets with a mic in hand telling real stories.

The Huffington Post has called you a “breaking news sensation,” and “our Latina Christiane Amanpour,” What is the feeling about that?

I’m totally humbled. She broke the mold in almost every aspect. She had an accent, dressed in way that defied stereotypes. She became a role model for me as for thousands of other girls around the world, and I’d be honored if I could inspire at least one girl to follow her dreams the way Ms. Amanpour inspired me.

What kind of content do you prefer to work on?

Content I am passionate about. Stories where I can show the human dimension, and if possible, help people with their struggles.

How was your interview with “Pope Francis?”

He is so charismatic that when he smiles he lights up the whole room. He has this belly laugh that makes you forget that he is a figure of authority. It was extraordinary. My takeaway from that interview was that he genuinely cares about marginalized communities and individuals, regardless of religion, politics or any other notion that might be alienating. He showed us that we are all worthy of his time.

Who has been your most exciting interview and who is still on your bucket list?

Tyler Perry has been my favorite, so far. He was relatable, authentic. He never forgot his roots. He talked about selling his DVDs on buses, and he gave me, my colleagues and the audience a great lesson on being comfortable in your own skin. On my bucket list I have Melinda Gates, Serena Williams and Malala Yousafzai.

Tell us about your activism work.

I do not consider myself an activist, I’m a journalist and sometimes my reporting helps certain causes that are dear to my heart and I show support for those causes, especially the ones related to Latino, children or women’s issues. My job is to inform with facts and give a platform to people who need it.

Which place that you have visited/covered do you think changed you in a particular way, maybe motivation or see a different reality, etc?

Ferguson because I had never seen the realities of the African American community first-hand before. It was a life changing experience to witness the racial divisions, the ingrained sense of desperation and lack of social justice that is so prevalent in some places like Ferguson, MO. I met a father who told me that he wished to have daughters instead of sons because they have a better chance at life. It was heartbreaking.

You have covered the migrant caravan, the Women’s March and the power crisis in Puerto Rico after Hurricane Maria. Tell us about those experiences.

They are very different experiences. What amazed me most about the Women’s March was to see not only thousands of women, unafraid, coming together, but actually transforming that unity into tangible changes with a historic number of women elected to Congress.

Puerto Rico was very difficult because I had been there before on vacation and it’s a paradise. To see it devastated and to feel the pain and frustration of those American citizens who felt abandoned by the government was really sad. To add insult to injury during the crisis they realized, probably not for the first time, that many in the mainland don’t view them as fellow Americans.

The migrant caravan showed me the despair of people fleeing from gang violence, poverty and terrible living conditions hoping to find a place where they can work to make their dreams a reality. They have faith in America. They believe in a brighter future in the Land of the Free! And even the rejection that they have faced is not enough to take away their hopes. I find that remarkable, as a testimony of the power of the human spirit, and it goes beyond any headlines.

You have a book coming out next year, Perfectly You: Embracing the Power of Being Real. Can you tell us a little more about that? What do you hope readers will take away?

It’s a passion project that started with my interaction with young people looking for inspiration. I hope that sharing my experiences will help them through their path. I think that when you embrace what makes you different you became a force of nature. It’s all about showing them how to find their own space without losing their identity.

It’s a form of self-expression. In many industries, women are still expected to fit into certain molds if they want to be taken seriously. I wear what I like, regardless of brands or trends. Fashion is a subtle way of telling people, “I’m here – and I’m not pretending to be someone else. Guess what? You can be wherever you want without changing your essence.”

Who is one of your favorite people you’ve interviewed?

My apple airpods (I’m obsessed because they let me truly multitask); a spare pair of heels while I run around in my sneakers (I’m always on the go and never know where I might end up: flight to a natural disaster or red carpet!) and my little necklace with the Holy Cross – I believe God is always with me and protects me every day.

Anything I can sing and dance to. I range from oldies American songs from the likes of Aretha Franklin, Bruce Springsteen and Tina Turner to Reggaeton, salsa and merengue.

My husband – mi amor – cooking breakfast by our terrace, while I’m on a hammock reading a book next to some palm trees swaying. Then we hit the gym and finish the day by catching a movie. I’m craving all of it now!

Define normal. Ha! As a correspondent who often covers breaking news, I’m at home one minute, and the next I could be heading into a natural disaster or political protest and not know when I’ll be back home. I live out of a carry-on. I have spent one out of every four nights in the past year at a hotel. In short, I have no scheduled routine. But I get to be in the frontlines of history. It’s a moment of my life that I know won’t last forever, but I am enjoying it to the fullest.

Doing what I love in novel formats and hopefully inspiring young people to be themselves and tell their own stories in a real way. Who knows what we can achieve? The sky is the limit! I feel electricity and excitement about the future. As long as we don’t forget who we are and where we come from, we’ll thrive on the ride.

Interview with award-winning Miami based producer and DJ DalePlay