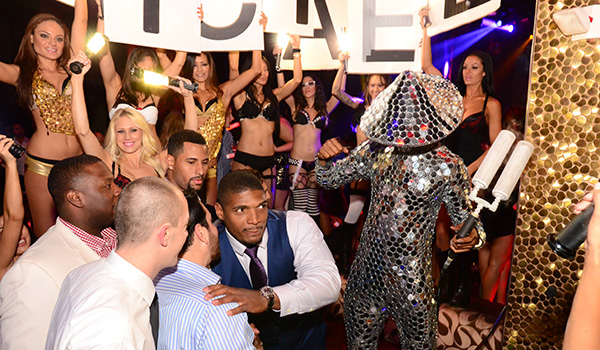 Michael Sam, the first openly gay player drafted by the NFL, celebrated the occasion at TAO Nightclub in Las Vegas Saturday night. Drafted by the St. Louis Rams in the seventh round, the defensive end from the University of Missouri was joined by boyfriend Vito Cammisano, who swam competitively for the school. A group of ten, including his agent and friends were on hand as Sam was surprised by a presentation from the club and a shout out from DJ Vice. He spotted Richard Sherman of the NFL champion Seattle Seahawks at a neighboring table the two chatted for a few minutes.

Sam and Cammisano later headed to the DJ booth, where Vice stopped the music to introduce and congratulate the newly signed pro. The crowd cheered as they danced and waved when Vice asked “Do we have any Rams fans in the house?!” The couple returned to their table where they celebrated the historic day until 3 am.