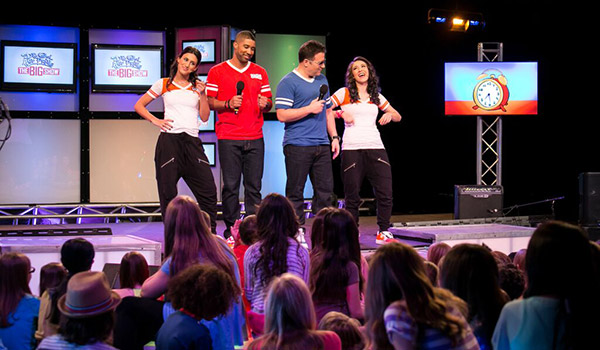 Dr. Cool and Pride- The Big Show! A “Bizar” Production 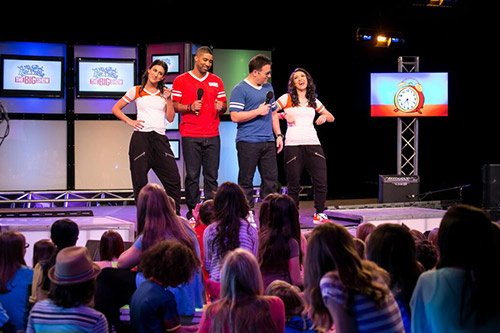 It’s not easy competing in the ‘kids’ television market due to a multitude of options for children to watch. With very short attention spans because of technology, it’s a challenge to find that show that will resonate both with the kids and the parents alike.

Jeff Bizar the creator, executive producer and star of “Dr Cool and Pride, The Big Show”, has created a show that is loved by parents, their kids and valued by teachers.

Dr. Cool is an educational and musical Hip Hop 30 minute party geared towards 5- 9 year olds that features Dr. Cool and his multi– cultural party crew. The show consists of the cast performing original songs and interacting with the audience from the stage. The kids love it on the set and at home.

Performing original songs and interacting with the audience of children from the stage. Dr. Cool and Pride, with DJ Sunshine and dancers Hip and Hop, rap and dance, welcome guests, run challenges, and learn languages with the help of their computer friends, Party Paige and Laughing Louie. Along the way, everyone is up and moving, feeling good, and learning valuable life lessons about topics such as exercising, decision making, eating well, dreaming big, and the power of music. 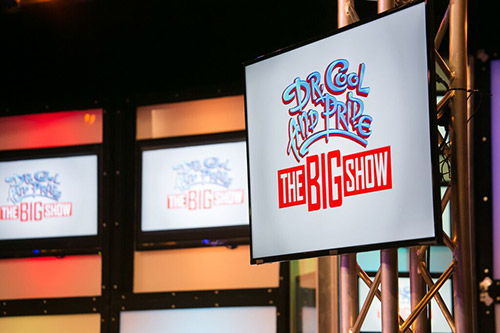 “The Big Show is a movement and attitude revolution, created to empower kids to live their best lives,” stated Bizar, the show’s creator.

Creator and Executive Producer Jeff Bizar, (Dr. Cool) is one of Chicago’s most dynamic DJs and in demand Emcees.  He has been in the Chicagoland entertainment business since the age of sixteen.

The high energy motivational shows are a combination of building self- esteem for all children and to promote positive messages such as: Anti –bullying, every child is unique and special, resiliency and they should be respectful, responsible and safe. The show also prepares kids to face life. 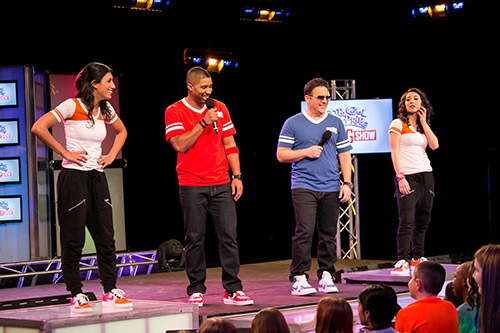 Jeff Bizar took the time to answer our editor’s Q and A.

Jeff, you are a well- known very successful Emcee / DJ in Chicago, can you share with our readers how you got started in the industry?

When I was 16, the day I got my license, I drove to the biggest DJ Company in Chicago and got a job. I went to a ton of parties when I was 13 and the DJ always gave me his card and said to call him. It was the best job and all I was doing was setting up and breaking down. I loved who I worked with and loved the music. I quit when I went to college at the University of Illinois. However, my Junior year I was asked by a friend to come back to Chicago on weekends to work. Again I loved the experience. By my senior year I was tired of driving home every weekend but I still had to make spending money. So I started the first version of Bizar Entertainment called the Chicago DJ Company. I basically did all the after-hours and Frat parties. I also booked my first big party where I made a lot of money. I had the taste of being an entrepreneur. I took my LSAT because my school plan-my life plan was to become a lawyer. During the test I wrote a song and decided to start Bizar Entertainment, Inc. Best decision I ever made.

Do you cater just to kids and teens?

Bizar does a lot of different kinds of parties. For kids we do birthdays at our own space called Detour in Deerfield. We do school dances at Junior Highs and High Schools and do hundreds of bar and bat mitzvahs every year. For adults, we love doing corporate events and 4oth birthday parties as well as weddings. We just introduced our newest concept Epic Nights-a Band/DJ/Emcee combo to the market.

What is involved in one of your live performances?

Live performances generally include a 3 position team. An Emcee, a DJ, and Interactive dancers. The Emcee runs the event and directs people where to go and what to do. The DJ plays requests and mixes the music. The dancers interact with the guests and help the emcee teach dances and run contests. We sell ourselves as the class of the industry-everyone is dressed appropriately and we only play clean music. There is no phony
hype-just real high energy people that love being part of special events.

You also perform at schools as “Dr Cool”- how did you create that character?

After losing a girlfriend, Amy, to an eating disorder, I had to do something. I went to my parents who were both educators and asked them what they thought of me going into schools and doing assemblies. They loved the idea and I started doing research on the causes of dangerous behaviors. While any factors are involved, most experts agree that SELF_WORTH is one of the leading causes of bad decision making. My parents told me that schools would think I was just trying to promote myself so instead of doing the assemblies as Jeff Bizar, I created a superhero named Dr. Cool. Doctor after Dr. J, the coolest basketball player I grew up watching and Cool after my main message-IF YOU THINK YOU ARE COOL YOU ARE – I later added Pride my African American performer who was named after a Mr. Luther King poster I had up in my office. It was a picture of him shaking hands and under the picture it said PRIDE.

What is involved with a typical school show?

A typical school show starts with kids entering to music-so right away their energy is up and they now something fun is about to happen. After our introductions, we usually do a warm up song and then tell a short story based on the age group. During the story new words are introduced like resiliency and perseverance and we interact with the crowd to find out what they mean. Then we usually do another song and the whole time we are looking for volunteers and doing our theme “I feel good, oooh I feel so good, huh!” We end the shows by getting kids up dancing and then teachers up to dance with them. The show is super high energy-interactive-fun-and filled with simple but great messages.

Our shows focus on the social emotional learning. Things like but not limited to:

For Junior Highs and High Schools we do the shows as ourselves-top DJs from Chicago. Same style but the stories are different-for example for little kids I might teach resiliency by discussing how hard it is to ride a bike. For older kids I talk about getting my black belt and how I couldn’t break a board and then I break a board in front of the kids.

Do you take these shows to schools outside Chicago?

Most of our shows are in the Chicago area-2 hours in every direction.

You now have a PBS Kids Show- Dr Cool and Pride-how did that show become a reality?

Technically we are not a PBS show-we are on PBS stations or local public stations. There is a great company in Chicago called Intersport that produces TV shows for stations like ESPN and CBS. They loved my concept and brought it to WTTW in Chicago. Niclolette Ferri the head of national programming loved it too and greenlighted it for a national series.

Do you produce and write the scripts?

I have my hands in everything but I also have a lot of help. I wrote the scripts, the songs, designed the stage and the costumes, and produced the shows. Once again, this was a team effort and many people helped me with each aspect of the show. I just had a certain vision that was based on what I already knew worked. Everything in the show has been market tested over and over.

What cities is the show airing in?

Dr. Cool and Pride is airing in: New York, Chicago, San Francisco, Orlando, New Orleans, Tuscon, El Paso, Albuquerque, Raleigh and Sacramento and shortly available to all kids in every city via our website.

Full episodes will begin to be online the week of October 24th.

Are parents and kids excited by the show?

I have received countless pictures and videos of kids watching and interacting with the show. This morning I received “my son is 4 years old with Downs Syndrome-we DVR the show and he can’t stop watching it”. Once again, from the people starring in the show to the music to the content-we know kids love this. And because it is safe-public TV-parents love it too. Kids love it because its hip and multi-cultural and sophisticated and current. Parents love it because it is helping them prepare their kids for the world.

Do you hope to take the show to every market in the country?

Yes, the goal is to have the show on all over the country as well as in countries around the world.

What is the goal of the show and messaging?

I call the show an ATTITUDE and MOVEMENT REVOLUTION. We have to teach kids early on to be active and healthy. In today’s world, kids are addicted to screens. So if they are going to watch us on a screen-we are going to get them up and moving. Childhood obesity is a huge problem in this country and it not only effects the individual but the cost on society is huge. To go along with the physical part you also have to teach kids to be mentally strong. Yes every kids is special and unique and that’s awesome. But equally important is teaching kids that life is an obstacle course and you have to know how to get back up when you fall.

On our show “GIVE”, we teach kids about giving back to the community-to help others. As a busy DJ in Chicago, I love what we do for families and I’m humble and grateful to be part of their special events. I call that the heart of my company. The soul of my company is helping kids be the best they can be. That is my give back. My goal is for the kids watching our show and interacting with our brand to be balanced-kids who are strong but nice-cool but kind-smart but goofy-kids who try to do the right thing but apologize when they make a mistake. This concept was born out of a tragedy-a beautiful soul left our earth too soon. My goal is to give kids the self-worth and the tools so that never happens again.

We thank Jeff Bizar for this interview.

For more information and to check out Dr. Cool and Pride videos go to: Drcoolandpride.com 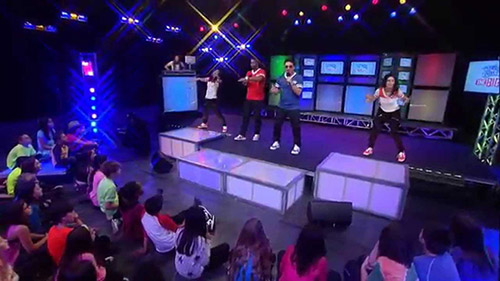