Eva Mendes and New York & Company invited the media and customers to participate in a series of unique flash mob fashion experiences to celebrate Eva’s second Fall collection, and one year anniversary, in partnership with the specialty retailer. Three fashion events occurred at three different iconic New York City locations on September 16th 2014. New York City, central to the DNA of New York and Company, served as the backdrop against which these events took place. The first of the Eva Mendes Collection Fashion Shows occurred at The New York Public Library, when models clad in the A-List celebrity’s Collection exited a double decker bus and took to the streets with a fashionable vigor, as tourists, passersby, and the public were treated to Eva’s take on the latest trends. The Collection was designed by Eva in New York City; in partnership with NY&C. Nothing is more fashionable than Bryant Park and the New York Public Library, the set for decades of New York Fashion Week shows. The maroon, dots, and floral prints in the collection were inspired by Fall in New York City. Flatiron Plaza was the scene of the most grandiose Eva Mendes Collection flash mob fashion show experience. Music was pumping and the energy was high to celebration Eva Mendes’ one year anniversary with New York & Company. Models took to the pavement, dancing, entertaining the crowd, modeling Eva’s classic, feminine fall designs with clear views of the Empire State Building in the background. Many were intrigued by the striking flower hats that adorned participants in the flash fashion show, which were an homage to the floral patterns present in many of the pieces in the collection. New Yorkers were treated to videos of Mendes and behind the scenes footage from her fall campaign on larger format video affixed to the side of the fashion tour bus during the fashion event. The final stop of New York & Company’s Eva Mendes Collection tour was the sidewalk along the retailers 58th & Lexington boutique. After the show wrapped, guests were given gift bags, and were granted the very first access to shop the collection as they danced and thrived off the excitement from the day’s events. 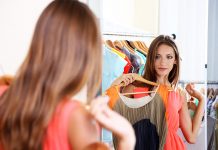 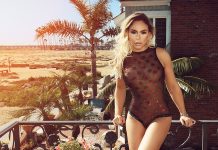 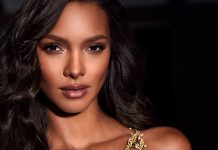