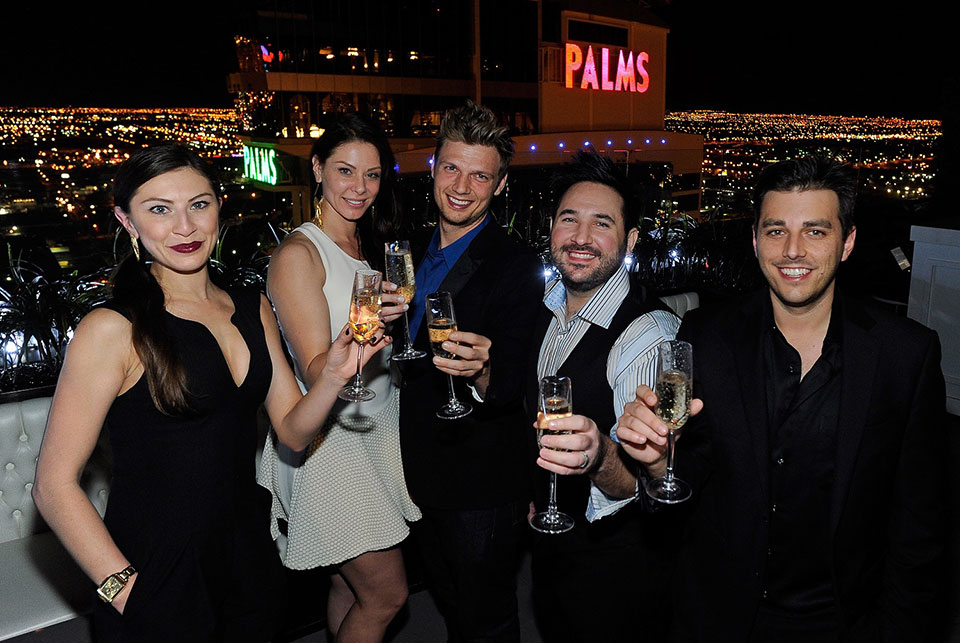 Backstreet Boys member, Nick Carter, celebrated his upcoming wedding to fiancée Lauren Kitt in style, with a co-ed bachelor and bachelorette party alongside a group of fifteen close friends at Palms Casino Resort in Las Vegas over the weekend (2/7-2/8.)

On Friday, Feb. 7, the future Mr. and Mrs. Carter and their bridal party kicked off their first night in Sin City partying at a VIP booth inside Moon Nightclub. When Moon’s gorgeous cocktail waitresses presented the dynamic group with a vibrant Ciroc bottle presentation, Carter proceeded to show off his playful side, grabbing glowsticks and twerking with the staff. The couple was seen being affectionate, kissing and dancing on each other throughout the evening. Carter and his fellow gents, spent the afternoon at Ghostbar Dayclub, the wild, over-the-top daytime bash, on Saturday, Feb. 8. Arriving to a warm welcome from hundreds of screaming fans, the Backstreet Boy, quickly threw on a pair of neon green sunglasses while posing for photos with high-energy partygoers before being blindfolded in the center of the room for an old-fashioned game of piñata. The crowd erupted as a few strokes into the game, Carter sprayed the hot spot with confetti as he smashed open the pink-and-white donkey shaped piñata. Carter and his friends returned to their VIP booth where the jolly singer sported the top of the piñata on top of his head. Carter was all smiles when he spotted two cocktail servers wearing unicorn heads and capes, asking them to come over and take a photo with him. He later hopped on his Instagram account to post a photo of the fun-filled sight saying “Check out these horse heads.” Later in the evening, Kitt and her girlfriends which included sister Alexandra, enjoyed an elaborate dinner at N9NE Steakhouse which included seafood, filets, caviar and the restaurant’s famed dessert, s’mores. Kitt, who turned heads in a white Jay Ahr dress with peek-a-boo cut outs, showed off her 7-carat diamond engagement ring on the red carpet upon arrival to Ghostbar. Carter joined Kitt on the carpet, gushing to onlookers how excited he was to marry Kitt and how he’s been letting her take the lead on planning their big day. “Wedding planning is going fantastic, that’s why I leave it up to her because I work and I let her plan the wedding,” said Carter. “It’s been going really well though.” The Back Street Boy also briefly mentioned that he’s been filming an upcoming reality TV show with VH1 that documents their entire wedding experience. Once inside the club, Ghostbar’s bevy of beauties complete with oversized scorecards that spelled out “Lauren” and “Nick,” presented the bachelor and bachelorette with a congratulatory three-tier pink and black cake that sported a blinged out diamond-ring topper. Confidingly, Kitt’s group of girlfriends humorously placed plastic light-up diamond rings on their fingers while Beyonce’s “Single Ladies (Put A Ring On it,”) played over the sound system. The couple looked at each other adoringly while Kitt hand-fed Carter cake before heading outside with Carter’s two best men, Shadrick Ferrer and Chris Stensby, and the maid-of-honor, Alexandra Kitt, for a champagne toast overlooking the famed Las Vegas Strip 55 stories below.

Carter is the last member of the Backstreet Boys to tie the knot.