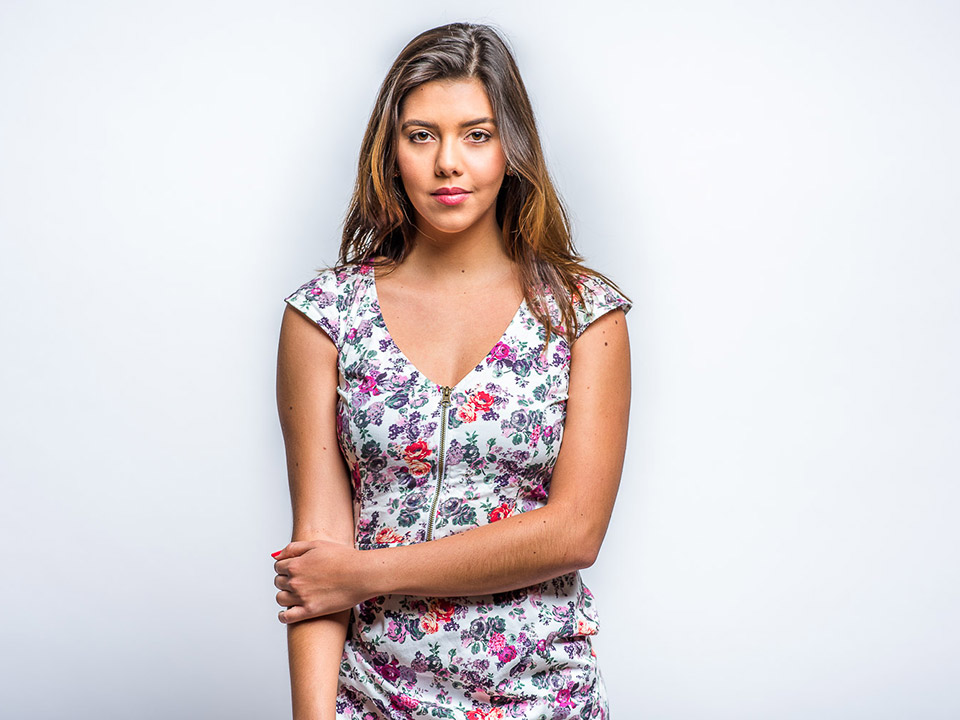 Nunu Roca was born and raised in a small coastal town in the Pacific of Costa Rica, where she developed a passion for the performing arts from an early age. She moved to Los Angeles in 2016, and after graduating from the ‘Acting for Film and Television’ career at the New York Film Academy she began working professionally as an actress, in theater, film and television. She has worked with renowned artists such as Eugenio Derbez, for the Cinemark promo for Overboard, Camila Cabello, for the music video of the song Havana, Maluma; and the television network Oxygen Network and Telemundo.

Nunu also speaks Catalan, since her father is from Barcelona, Italian, Spanish, and English and hopes to be able to participate in projects of all these cultures.

Nunu grew up on a farm in Costa Rica and used to pick oysters and shells on the beach for her grandmother to prepare rice with seafood. However, she attended an American school that gave her the opportunity to learn English and introduced her to the world of theater, which became her great passion after participating in a production of ‘La Casa de Bernarda Alba’ by Federico Garcia Lorca.

But this actress does not wait for the projects to come to her, so she also wrote, produced and acted in her short film ‘No Se Puede Armar’ accepted at 5 film festivals, which gave her a nomination as best actress.

Her goal is to continue growing as an actress and professional, representing her country and the Hispanic American community and she hopes to inspire and help others to achieve their goals!

As an actress, what have you accomplished?

My most recent film Incomplete has received significant festival acclaim and international recognition, it was officially selected for the Barcelona Planet Film Festival and also granted me a “Best Actress” award from the New York Film Awards. I pursue work in both English and Spanish media, and have had the opportunity to collaborate with influential figures such as Eugenio Derbez, Maluma, and Camila Cabello.

Why you are passionate about your work.

I am very passionate about my craft. First of all, for me, acting is a constant journey of self-discovery and self-awareness, and it is also an opportunity to give life to so many untold stories amongst us. I love that through my roles I have the privilege of living all the realities that I, Nunu, am not. I enjoy being in front of the camera, I consider myself a role model and I have had such a blessed life, it’s my turn to give back and hopefully present that privilege to others.

Did you always know you wanted to be an actress?

I was not always sure I wanted to be in this industry. Honestly, I was very confused growing up. Since I was a little girl I knew I loved performing! I did theater in school and I also loved to pretend I was a singer at a huge concert packed with people (of course my voice proved otherwise haha) At the same time I was also very studious and meticulous so I always thought I was supposed to study a more health-like or administrative career… I decided to follow my passion and stick to the arts, and like any other industry, it has its ups and downs, but I am so happy to be doing what I love, I can see myself here for a very very long time!

What is your biggest motivation?

It is the people: their passion for their stories, their support of your own work, their trust in you with their characters, and the encouragement of your followers.

Any advice for other people pursuing a career as an actor?

My advice would be to definitely study, and be specific with your goals! Do you want to be a stunt actor? Or television, or voice-over… etc. Really think about what it is you want to achieve and inform yourself about the training, schools, universities, work-shops etc, and work towards that. Also, it’s important to always be kind, because you never know who will remember you and be willing to lend you a helping hand when you need it the most.

Today, I would say that my top three idols are:

First, my father. He is the figure of hard work and perseverance in my life, he has proved that no matter how great a set-back, you can always get up! He is a constant reminder of determination, gratitude, and prestige.

Second, Spanish actor Mario Casas. At such a young age, he has an incredible career. His impressive range as an actor, his transformations for each role, his dedication to the craft have really set him apart and his work inspires me! He’s a part of films with heart-felt stories and is constantly working on set! I can’t wait to see more of his work. Did I also mention he’s incredibly good-looking!

Third, Jessica Alba. I think she has really set herself apart as a professional, she began as an actress and is now a successful entrepreneur with her own industry. She is a smart, influential, charming woman who I really look up to!

What was the hardest part about your career?

The hardest part are the scams, and economical complications I have had to go through in order to really open my eyes and become aware of the downs of this industry… I won’t go into much detail but unfortunately sometimes the best way to learn is to live unfavorable experiences, however you also become stronger and wiser and as long as I am healthy and well, I will keep moving forward despite of the difficulties.

What projects do you have?

The next year is full of surprises! I am very excited and welcoming all the projects to come. As of now you will be able to follow me as the character Eva for a series called F.E.A.R.S. to be released towards the end of the year on a VOD platform to be yet announced. The show is about four young women who have been banished from hell for doing good deeds. Forced to hide from Satan, they now attempt to navigate life in the real world!

Also, my film Incomplete is in its festival run, we have been selected in various film festivals up until now, however are still expecting confirmation and approval from others, and we are hoping to attend the Hollyshorts Film Festival in August this year.

On another note, I am working on the script for a feature to be filmed in Costa Rica, details have yet to be disclosed but keep up with me on social media for more information along the way!

What else do you do in your life?

Besides acting I also work on writing and producing! More things I love include surfing, being outdoors, cooking and traveling! Follow me on social media to keep up with my work and adventures!