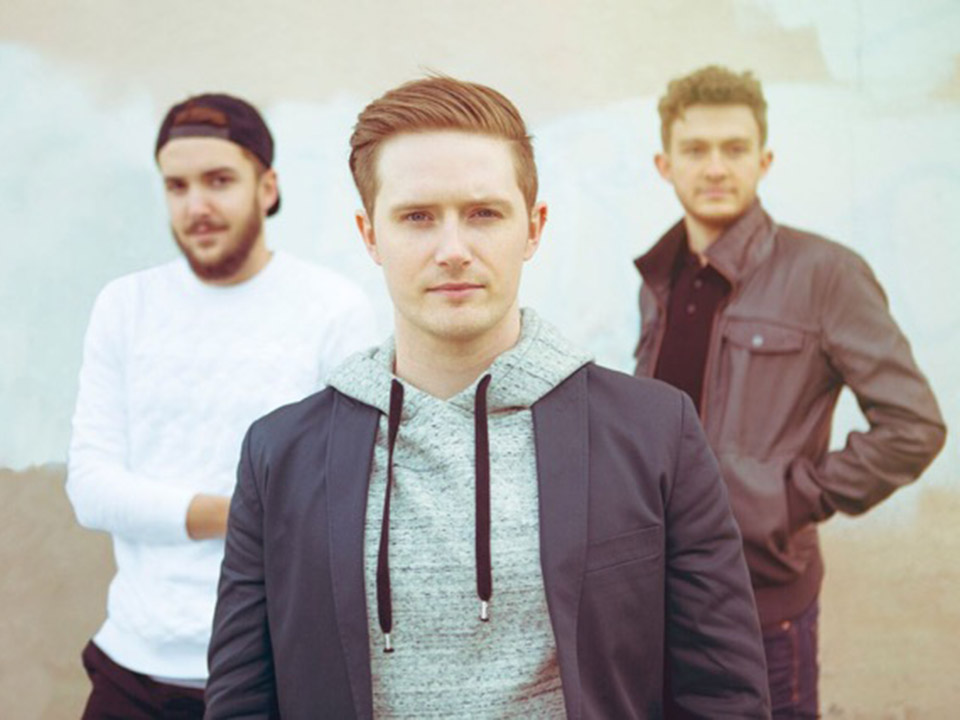 Our interview with alternative Pop band Plaid Brixx who have announced the release of their new video for their single, “The Greener Side” recently named “Best Song of the Month” by Songwriter Universe.

Plaid Brixx is comprised of founder Chris Duggan (vocals & guitar), Mark LeRose (drums) and Jared Sawaya (bass). Since their inception, the band has been featured at several major festivals including SXSW, CMJ, Fashion Meets Music Festival, Musikfest and more! With their debut release, Chemistry, the band was nominated for Best Rock EP of 2014 by the Independent Music Association. The new single, “The Greener Side” landed the band a spot on Spotify’s New Music Friday playlist and their recent #ThankATeacher playlist.

Hey I’m Chris from Plaid Brixx – I sing and write songs and play guitar. I’m 26 and I live in Columbus, Ohio which is a great place to live!

When did you start, and when did you know this was the professional life for you?

I started fooling around with a guitar when I was 7 years old – I asked for an electric guitar for Christmas, but it wasn’t until a few years later – maybe 9 or 10 years old that I decided music is what I want to do with my life. Even though there have been times when reaching my goals looked difficult, I have never changed direction.

How did you guys meet?

Mark LeRose – basher of drums – and I met in high school here in Columbus and played in a bad punk band together. Jared Sawaya – master of the bass – was a fan that we invited to join the band because he was such an awesome dude.

What kind of music did you guys grow up with?

Mark and I grew up listening to pop punk and emo bands, but I grew into a love of metal and progressive metal. For about 3 years in high school and college I refused to listen to anything besides Tool and The Mars Volta and other stuff like that. My dad raised me listening to The Beach Boys, Bob Dylan, The Rolling Stones, The Kinks, The Beatles and The Doors and my mom had me listening to Billy Ray Cyrus, Elton John, Garth Brooks and The Pointer Sisters so I was exposed to tons of different stuff growing up. My sister always takes credit for me liking guitar-based music because she used to play me Nirvana in the early 90s before I could even talk. My brother introduced me to Steely Dan, The Grateful Dead, The Red Hot Chili Peppers and Led Zeppelin. I’m the only musician in the family but all of us consume a lot of music!

Who was your music inspiration at that moment, and who is now?

My musical inspiration is constantly changing – when I was a young lad and sprouting musician, Blink 182 was my first inspiration. Right now my inspiration is Mozart, specifically his later work. Last month I was obsessed with Grimes. It’s constantly changing as I discover more and more music but I tend to gravitate towards music with strong melodies. I can tell you that when Tool’s next record comes out, after what will have been a decade wait, I am going to be obsessed with it. My prog metal afterburners are going to come back online after all these years.

What kind of music do you listen on daily basis?

I listen to classical music almost exclusively while I’m driving. Columbus has a great classical station – Classical 101 – and I listen to it constantly. It’s also easier to get work done while listening to music without lyrics because your brain isn’t trying to decipher what is being said, so I like classical music for that reason as well – it soothes me. Generally classical music is the only genre I listen to habitually on a daily basis besides Top 40.

On your point of view, how is the music scene right now?

Streaming continues to climb in popularity and artists continue to break sales records so fans are listening now more than ever. Or maybe the world population is continuing to climb and more people are consuming music now then ever. I’m happy either way. I do think it would be nice for artists to make more from streaming though. I’m sure it will all get ironed out eventually.

For the most part, I have been really impressed over the past few years with how well-written and well-produced most of what I hear on the Top 40 and Hot 100 is. There are always exceptions but I think pop music has had a great couple of years and I hope to see that continue.

Now tell us about your newest single “The Greener Side”?

I wrote it in LA with Melody Noel, a super talented classmate of mine from college. Mike Molina and Nelson Kyle of The Agency produced the song. We were going for a great, fun song to kick off our new EP and showcase our new sound!

How was performing at SXSW?

It was exhausting but very fun! We played 5 shows in 4 days – so we were really busy and didn’t get to explore Austin as much as we would’ve liked to. We’d like to go one year and only play one show, then just hang out for the rest of the festival and treat it like a vacation instead of work!

We have lots of exciting stuff going on. ‘The Greener Side’ is the first song from an EP that will be released in about a month. We have videos ready to go for two more of that EP’s songs, ‘Don’t Look Down’ and ‘Since You Came.’ We’ve got a whole summer of touring lined up at some great venues and I’ve been writing new songs like crazy! There are about 30 songs in various stages of completion, and I’ve scrapped even more than that so you know those 30 are great. I can’t wait to have time to get them finished and start making more videos!!

What do you guys do in your free time?

I like to read and do all sorts of physical activities – kayaking, tennis, lifting, biking, crossfit and hiking to name a few. When I have time (infrequently), there are a few video games I play such as World Of Warcraft and Heroes Of The Storm.

What do you guys like to watch on Tv?

Mark and I are die-hard fans of It’s Always Sunny In Philadelphia. In many ways I think it is the best show on television, tied with South Park! I am also a fan of Master Of None and Game Of Thrones.

Something fans don’t know about yourselves?

I don’t drink alcohol and I am a fitness nut.

Any tips that you can give to up-coming talent?

If you are one-hundred percent sure that music is what you want to do, be prepared to never give up and don’t get complacent or cocky about your skill level. Always over-prepare, over-practice and remember if you aren’t working your hardest and doing your best, someone else is and they will succeed before you do. There is also an element of luck to success so you have to remember that when times get tough. Remain thankful and never stop being grateful for the successes that you do have and more will follow.

What kind of music we can find in your iPod?

Do you guys support any charity?

We like to support Columbus and donate performances to various local causes that are doing great work. For a couple of years, we played at the kickoff to the Columbus AIDS Walk Central Ohio. This year, we are going to play a show for the patients and staff at The James Cancer Center Hospital as well as play at Pelotonia, one of the major fundraisers for The James. And this fall, it looks like we are going to contribute a show at The New Albany Classic, a fundraiser for The Center for Family Safety and Healing whose mission is to break the cycle of family violence and restore hope.

Sleeping late, sitting outside with my dogs whilst sipping a cold beverage and reading.

It’s great for connecting with fans you wouldn’t normally be able to speak with – but hearing or seeing people’s every meal and opinion can get overwhelming so I try not to spend too much time on social media. I’m not sure people value their privacy enough these days.

Favorite Quote: Someone once told me that you must simply trust in your work and allow life’s strange coincidences to take you along for the ride.

Favorite Travel Destination: I love Ireland. I may be biased because I’m of Irish descent but I’d love to live there – it rains a lot there and I love the rain.

Favorite movie: Requiem For a Dream or Darjeeling Limited or The Life Aquatic – basically any film with Wes Anderson or Darren Aronofsky attached to it.

Favorite Food: Pizza, but I don’t eat it as much as I would like

Celebrity Crush: Ms. Taylor Swift! she’s single now so maybe you could make that happen for me