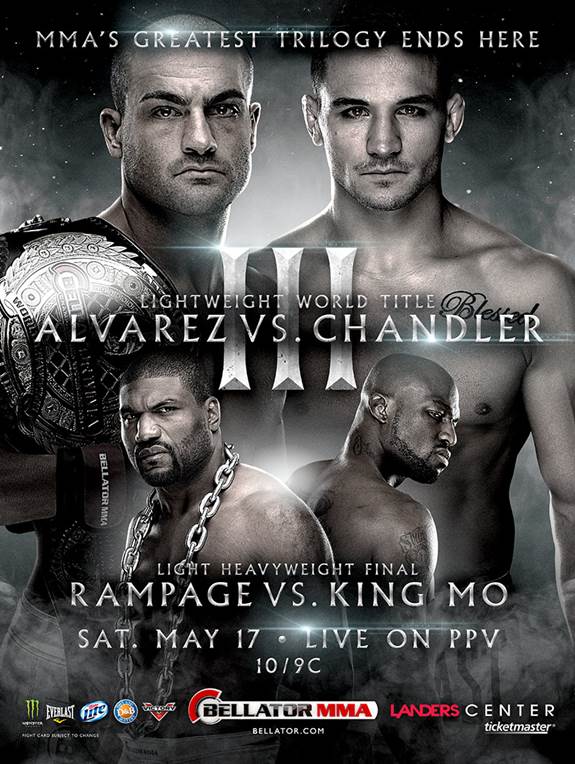 MMA’s greatest trilogy is set for Saturday, May 17th as Bellator  Lightweight Champion Eddie Alvarez will defend his title against Michael Chandler in the most highly anticipated fight of 2014, live on Pay-Per-View. The night also features the Memphis return of MMA superstar Quinton “Rampage” Jackson, who will square off against King Mo Lawal in one of MMA’s most heated rivalries. The event will take place from The Landers Center, located just outside Memphis on Saturday, May 17th.  Tickets for the event will go on sale on Friday, March 14th at 10am CST on Ticketmaster.com, Bellator.com and The Landers Center Box Office.

The main event is the third installment in this epic MMA trilogy that has featured a spectacular submission victory for Chandler at Bellator 58 and a dramatic 5-round split decision victory for Alvarez at Bellator 106 this past November. Both of their previous fights were considered for “Fight of The Year” by the MMA media and fans.

A native of South Memphis, Rampage returns to The River City for the first time in fifteen years to battle King Mo in the Bellator Light Heavyweight Tournament Finals. Since joining Bellator in 2013, Rampage has delivered two highlight reel knockouts, and will face his toughest test in Bellator to date when he battles King Mo from The Landers Center on Saturday, May 17th live on Pay-Per-View.

“I’ve been wanting to come back to Memphis for the last decade, and I’m finally getting that chance to fight in one of the biggest fights of my career for Bellator,” Jackson said. “After being part of the Bellator family for a while now, I feel like the old Rampage, and that’s not a good thing for Mo. I’m back, I’m a monster, and I’m looking to put on another entertaining fight for all my fans on May 17th.”

“When it comes down to it, this is a fight I’ve wanted for a long time, and I’m going to be able to beat his ass in his hometown, and everyone is going to respect me,” Lawal said. “Rampage is just a stepping stone in my way to get that title shot again and get that belt. It’s all I want, and after I beat Rampage, I’m going for that belt, simple as that.”

“We now have two fights on this card that are absolute fireworks,” Bellator Chairman & CEO Bjorn Rebney said. “Like I said before, we have Alvarez and Chandler headlining a card that will end the best trilogy ever in MMA, and now we’ve added two more superstars to the mix with Rampage and King Mo. May 17th is going to be an absolutely huge night for Bellator, live on Pay-Per-View.”