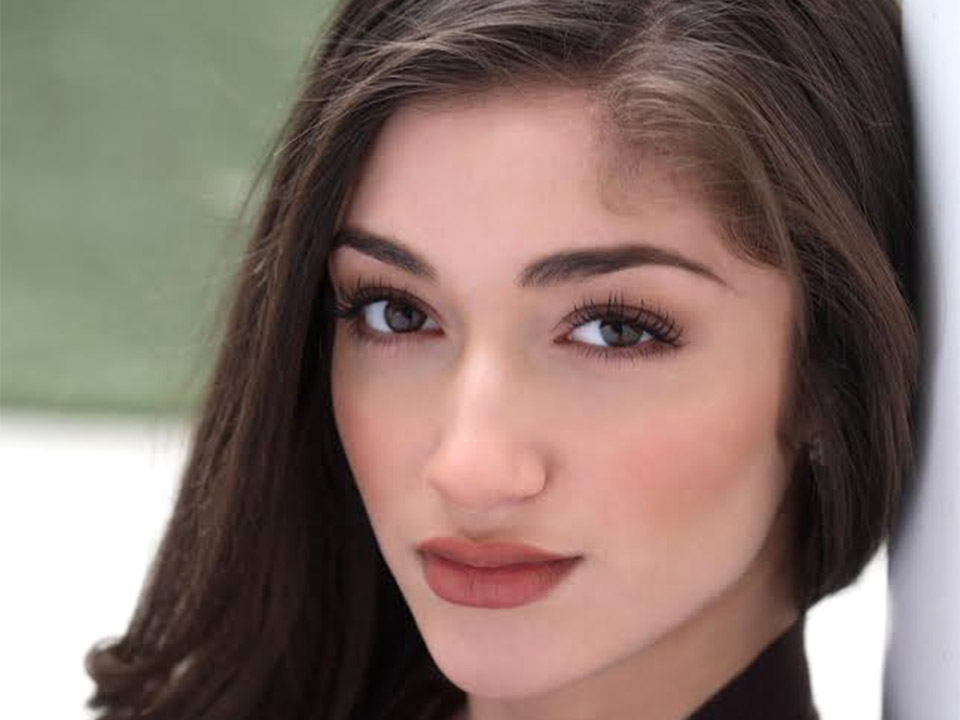 RAQUEL CASTRO, the lovable and charming actress who captured our hearts in the movie “Jersey Girl”, showcased her remarkable singing and dance talent to the world on season one of NBC’s hit show “The Voice.” As a finalist on Christina’s team, Raquel recalls her most memorable stage moment: “Performing “Lady Marmalade” with Christina Aguilera and the team. Raquel was born in Long Island, NY, on November 17, 1994 to an Italian mother and Puerto Rican father. With her father being a singer-songwriter and her mother an acting coach, Raquel’s path to stardom was nurtured and encouraged from an early age. By age four, she was regularly appearing on Sesame Street and Nick Jr. However, at age seven, Raquel became a breakout star playing the lead role in Kevin Smith’s feature film, “Jersey Girl”, alongside megastars Jennifer Lopez and Ben Affleck.

Raquel also had the opportunity to debut her singing with Steven Sondheim’s “God That’s Good” in a scene with Ben Affleck , George Carlin, and Liv Tyler. Raquel charmed the talk-show circuit appearing as a guest on “The Tonight Show ” with Jay Leno , Ellen and The Sharon Osborne show. She was also a guest star and co-host with Ryan Seacrest on his show “On Air” with Ryan Seacrest.” At age 10, Raquel was appointed the youngest correspondent ever for Entertainment Tonight, where she had the opportunity to interview high-profile celebrities, Paula Abdul, Jim Carey, Cameron Diaz, Queen Latifah, Adam Sandler, Mary Kate and Ashley, Hilary Duff and more at the “Kid’s Choice Awards”. After competing on NBC’s “The Voice”, Raquel’s online popularity has blossomed. Her You Tube channel has garnished over a million views and a contribution to that popularity is her cover of Christina’ Aguilera’s “Ain’t No Other Man” as well as Selena’s “Amor Prohibido” which showed her versatility as a bilingual/Spanish singer. Another dream came true when Raquel opened for the artist “Miguel” at Rye Playland.

 Raquel recently guest-starred on MTV’s Awkward and has a recurring role on Disney’s Liv & Maddie as South Salamanca. Look for her in the new movie “No One Asked Me” based on the award winning play by Kate Ballen, and directed by Australia’s Matthew Newton, which sheds light on young illegal immigrants lost in the system. In this next chapter, Raquel is dedicating herself to her music. Her music style is HIP- POP with a fun urban flavor . Raquel has always looked up to artists like Beyoncé, Christina Aguilera, Rihanna, Selena and of course Jennifer Lopez. Raquel has recently signed with Ray De La Garza’s label , “Roc Cartel”.

Hi Raquel, please tell us a little about you?

My name is Raquel Castro. I’m 20 years old, about to be 21 in November. I’m a singer/songwriter/actress/dancer from Long Island, N.Y.

Well, I think I was singing before I could even talk. I was always surrounded by music growing up. My father would mostly play Tony Bennett, Frank Sinatra, Nat King Cole ect.. My favorite to sing would always be Natalie Coles rendition of “L-O-V-E.” I started recording around the age of 4, doing children safety videos and such. I was this little munchkin wearing these huge headphones that were WAY to big for my head haha. I loved entertaining people and putting on a show. It’s in my blood.

Music in general inspires me. I grew up listening to so many different types of genres of music. Anywhere from Frank Sinatra to Norah Jones to Selena to Christina Aguilera. Over the past few years I’ve been writing my own music and I’m realizing things about myself as an artist that I never knew. There’s so many subliminal influences that come out through my writing here and there.

Define your sound in 3 words?

Feel Good, Honest & Fun. I like to call it Hip-Pop

How was the experience of “The Voice”?

The Voice was my first real step into the music industry. I’ve never performed in front of a crowd like that before I went on the show. Being surrounded by so much amazing talent, was inspiring, and helped me figure out who I was an artist.

How was the process to be selected as one of the contenders?

I actually joined the competition pretty late. I heard about the show through family friend Lucas Prata, I wasn’t really sure how I felt about doing something like that. Then, I found out Christina Aguilera, my childhood Idol, was involved. Then I was like, sign me UP! I did a Skype interview with the producers of the show and then they flew me out to LA to audition for the execs and so on.

And working with Christina Aguilera?

Working with Christina was like living a childhood dream. She’s an amazing person and an amazing singer. Getting to sing “Lady Marmalade” with her is still so surreal. A memory I will definitely cherish forever, and tell my kids about.

Do you still watch your performances videos and think I could do this or that?

ALWAYS! I mean I’m not constantly watching my videos but when I do I always feel like there something I could have done better. Whenever I perform, my mom tapes me, and as soon as I’m done, I run to the bathroom and listen back. I’m a perfectionist and definitely my own worse critic. I always wanna be better than I was before.

You have been the youngest correspondent ever for Entertainment Tonight, tell us about that?

That was SO much fun. I was such a lucky kid. I got to meet so many people that I grew up watching. I did my impersonation of Jim Carrey in “Liar Liar” for Jim Carrey himself. I shook my toosh to “I like big butts and I cannot lie” with Cameron Diaz. Great times, I wish I could go back in time.

Tell us about “Jersey Girl”?

Jersey Girl was a blessing. I worked with an amazing cast and crew. And I played my OTHER childhood Idols daughter, Jennifer Lopez. They treated me like a princess on that set. I’m still called “Jersey Girl’ till this day, almost 14 years later since we filmed.

How was the casting for this role?

I was a baby. I think I was 6 when I auditioned. I just remember going in and the casting director like staring at me. And then going in for the callback and Kevin Smith was there with producer Scott Mozier. We had a lot of fun in the audition. Kevin Smith is incredible. And then after the callback I went to Mcdonalds with my mom. Life was simple back then.

Tell us about your character South Salamanca in Liv and Maddie?

Filming Liv and Maddie was awesome. I moved to LA by myself after I graduated high school. I was 18. Liv and Maddie was my first job I booked out in LA. The cast and crew are amazing people. Andy Fickman, the director, is the man. I loved playing my character “South Salamanca” because she’s SO different than I am in real life. It was fun to step out of my shell and become someone else. It makes it fun, It’s like a challenge.

Your current project is guest starring on Fox’s hit show Empire. Tell us about your role.

My characters name is Marisol. She’s a pop singer/dancer with a lot of latin spice. She’s kind of the sporty spice out of the group.

In my free time I love to write music, thats usually at like 3am when I can’t sleep. In the past few months I’ve also become a Netflix junkie. I love hanging with friends. I enjoy going out dancing. I like being spontaneous.

My phone, my wallet cause I’m always buying some sort of food, and a phone charger just incase my phone dies at my final destination.

You just released a new single?

Yes, my new single is called “Young & Dumb” I was super excited to release this. It took a really long time to get this opportunity, but I believe it happened the way it should. I wrote the whole top line myself (Lyrics & Melody). And then I was introduced to Jon Kilmer, who produced Young & Dumb, through a long time friend Ryan Flanzer. Between Jon, Ryan, Ray De La Garza (head of the record label Rocc Cartel), my vocal producer Earl Cohen and my mom, I feel extremely blessed and excited about this project. I’m lucky to have so much support from such amazing people. This song has a feel good, poppy vibe mixed with a little of my latin spice. I’m excited to see what happens next.

Oh gosh , there’s so many people I’d love to work with and admire so much. I’d love to reunite and maybe do a performance with my movie mom J-LO. Id love to write with Neyo, Ryan Tedder and actually Id really like to sit in a room with Meghan Trainor, I think we have similar writing techniques and we could make some dope stuff together! Bruno Mars, BEYONCE, Drake. I wish Amy Winehouse was still around cause that’s definitely someone I respect.

I love Rachel McAdams. We actually have the same birthday. I think she is so classy and after seeing her audition tape for The Notebook I was so inspired. Also, Margot Robbie and Jennifer Lawrence. They’re amazing.

Don’t get lost in the lines. That’s something I learned. Don’t focus so much on the lines you’re saying. Be in the moment, have natural reactions. I think thats when you do your best. Don’t overthink.

Well when I’m not working I’m usually laying in bed for a very long time. I like to collect my thoughts and just ease my mind. Then I like to get up and maybe head to the gym or put a cute outfit on and roam around town. However, I love being busy with work. I love being on set or in the studio. That’s when I’m my happiest.

For my career, very important. I like to stay real & fun though. I don’t take much seriously, especially myself. I don’t like constantly posting about events I’m at, and all that crap. Id rather tell you my feelings about the guy thats driving 15 miles per hour in a 30mph zone. Or how I’m not gonna be able to walk after my insane leg day at the gym. I like to be open and genuine.

Quote: I love quotes. Thats my thing. But at the moment my favorite is “Change the way you look at things and the things you look at will change.”

Travel Destination: All of Europe

Sports Team: I’m not a big sports person but I love going to baseball games. Yanks & Mets. New York all the way