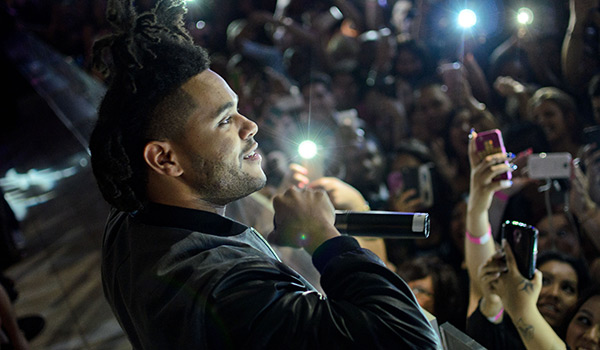 Last Friday, May 16 PURE Nightclub inside Caesars Palace, The Strip’s top mega-club, which recently announced its closure for a full venue remodel, welcomed internationally renowned recording artist The Weeknd for an iconic live performance. Arriving around 1:30 a.m. the celebrated R&B artist, also known as Abel Tesfaye, made his way to a VIP booth located on the main stage. As he took in the sights of the packed main room, the Canadian sensation mingled with his guests as he prepared for his highly anticipated performance. Moments later the soulful singer grabbed the mic exclaiming “Las Vegas make some noise, I came all the way from Toronto to party with you, ”and the energy of the room soared to new heights as thousands of partygoers eagerly awaited his sultry sounds. The talented artist put on an exhilarating show for his adoring fans as he performed three of his most memorable hits including remixes to Beyonce’s “Drunk In Love,” and Ty Dolla $ign’s “Or Nah,” as well as his smash hit “Crew Love.” Partygoers were on their feet dancing and singing along for the entire performance, as the Tesfaye commanded the stage making for an unforgettable evening inside the mega-club.