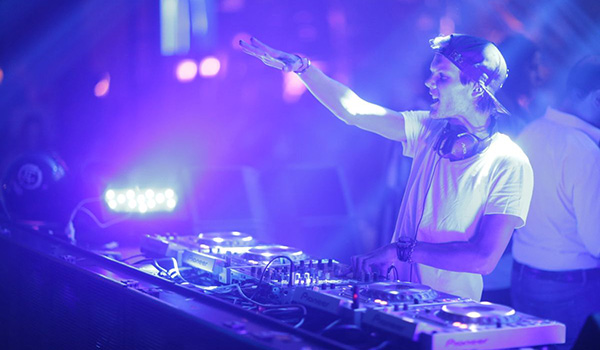 The kickoff to summer in Las Vegas showed that it reigns supreme at XS last night. Last year, Labor Day Weekend closed out with a bang as David Guetta set a new XS Las Vegas attendance record with a special edition of the venue’s celebrated Night Swim party. That 10,000 attendance number was shattered last night, as the award-winning nightclub located inside Wynn Las Vegas saw 11,000 people walk through the doors on a flow throughout the evening to check out what Avicii had in store for the launch of summer season. Night Swim allows guests to ditch their clubwear and put on their best swim apparel to jump into the club’s glistening outdoor pool. For Memorial Day’s edition, the stage faced both sides of the crowd so no one missed a second of the action, as well as large LED boards that broadcast Avicii live to the outdoor area along with his custom video production. There wasn’t a spot to be found on the dance floor nor in the pool, but every time the beat dropped, the water splashed high into the sky as fans took in the set both from the water and on dry land. Managing Partner Jesse Waits confirmed close to 4 a.m. that the club had seen record-breaking attendance, defeating the mark left by Guetta in the fall.