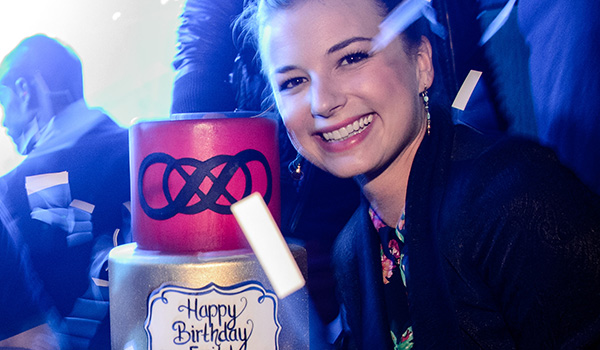 On Friday, May 16 Hakkasan Las Vegas Restaurant and Nightclub at MGM Grand was a sight to see as Emily VanCamp, star of television’s hottest show “Revenge,” was spotted celebrating her birthday alongside boyfriend Josh Bowman and a group of friends including ABC co-star Ashley Madekwe. The actress had a lot to celebrate since wrapping yet another successful season of her primetime drama, as it was recently announced that the show had been renewed for a fourth season.

As the night began, VanCamp, Bowman and friends were spotted dining at Hakkasan Restaurant. Arriving around 10:30 p.m., the beautiful starlet was dressed fashionably in a floral print short romper with black blazer and pumps. In seemingly high spirits, the enthusiastic group indulged in a number of Hakkasan signature dishes and cocktails as they fully enjoyed their dinner inside the destination’s second level private dining room. Following dinner, the Hollywood “It” couple and their guests made their way to a VIP table located fourth level of the nightlife mecca. As they took their seats they joined together in a celebratory champagne toast and took in the sights of the packed main room. As the night went on, a group of Hakkasan’s model cocktail waitresses surrounded the star to present her with a lavish 3-tiered black, gold and red birthday cake adorned with beautiful red roses and topped with the iconic “Revenge” double infinity symbol. As confetti burst into the air, the group cheered with excitement as the birthday girl posed with her stunning cake and boyfriend Bowman looked on adoringly. As the evening progressed, the animated group mingled, took photos with one another and danced to the renowned beats of resident DJ Tiësto before exciting the nightspot just after 2 a.m.