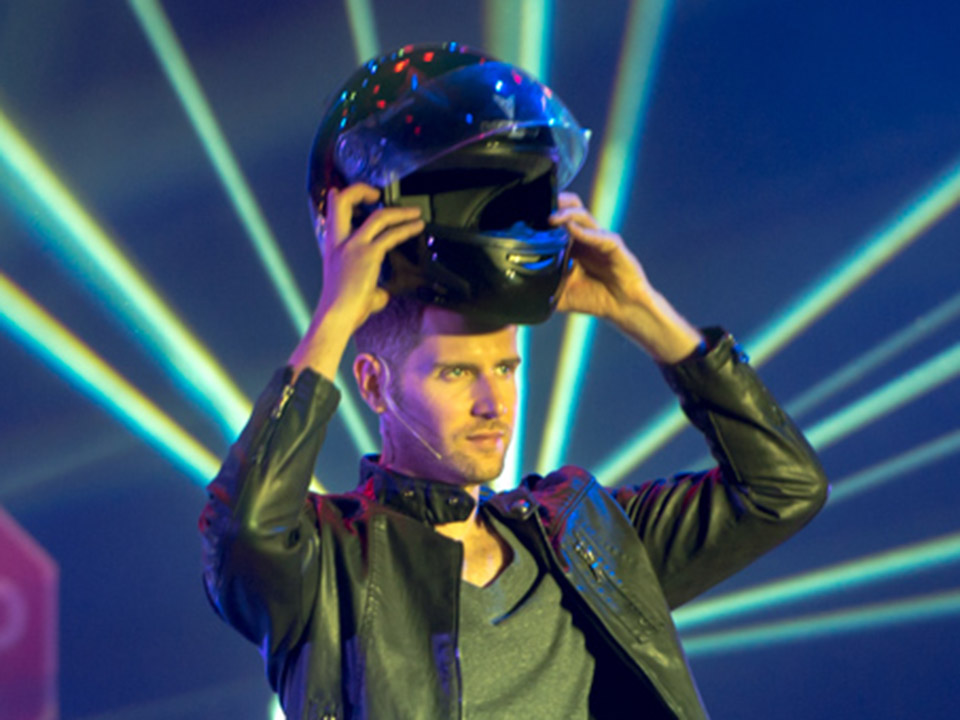 Rob has become internationally renowned for his mesmerizing illusions, which have captivated millions on network TV and in Times Square, on the Vegas Strip, Atlantic City, and before sold-out crowds in casinos, arenas, and theaters worldwide.

In 2008, Rob became the youngest magician in history to receive the Merlin Award for International Stage Magician of the Year — which is considered magic’s highest honor, the industry equivalent of an Oscar, Emmy, Tony, or Grammy. He has also been named the “Top Illusionist in the World” by Caesars Entertainment. Rob has served as a magic consultant for network TV series, films, and large theatrical productions, such as The Phantom of the Opera and Disney’s Beauty & The Beast.

How did you get involved in magic?

When I was 10 years old, my family took me to a magic show. I knew immediately then and there that I would be a magician.

When did you realize you wanted to become an illusionist?

I always loved the stage, and I knew when I started magic that I would be a stage illusionist. Sure, I started with close-up magic like card tricks, rope tricks… But my dream and focus always was for having a large stage show.

What is your next goal as a magician and illusionist?

My next goal is to keep loving it. I have always had a passion for magic, and as long as I keep loving it, I’m happy. I do have several illusions that I am working on, some have been in the works for years. Also, I’m learning more and more about TV and hoping to break into that, to share my magic with more people.

How is it to captivate millions of people with your illusions in places like Times Square and the Las Vegas Strip?

One little secret I’ll share is that often I forget where I’m at. I travel with all of my scenery, lighting, curtains, and production. All of this fills four semi-trucks. So every theatre we are in is transformed into almost the same for me- and ultimately the audiences all have the same reactions and have the same amount of fun whether in New York, Vegas, Europe, Asia, or a small town.

Do you still get nervous performing on a stage?

It feels second nature, like being at home onstage. I recently tried to remember the last time I was nervous- and can’t think back that far.

What’s the feeling like of winning the Merlin Award for International Stage Magician of the Year?

That was a rush! To be recognized by nearly 40,000 of my peers around the world was a huge honor, and a big surprise. I was 25, and the youngest magician to have received this honor, one that those I grew up looking up to had been awarded. I had dreamed of one day receiving this award, and I never expected to earn it so early in my career.

And to be named by Caesars Entertainment as the “Top Illusionist in the World?”

Again, a big honor. Caesars is the largest gaming company in the world. It has been a lot of fun working with them at many of their properties.

What other projects or shows have you been part of?

Last year I just ended a run at the Atlantis Resort (in the Bahamas). It was their first show in 20 years, and an initial summer run extended 5 times and kept me there about a year and half. It was amazing performing every night and walking to work along the beach.

We also just had a great winter run at Harrah’s Lake Tahoe, also just as gorgeous.

Every year, I spend a month or more entertaining US troops overseas. My grandfather served in WWII, and told me stories about Irving Berlin and others coming to play for the troops in the Pacific. So for the last decade I’ve made sure to do a tour. We do 3-4 shows a day sometimes, and have performed in many remote locations around the world for the US military and their families.

In addition to performing, I create illusions for TV/film, and other stage shows. I have created the magic for hundreds of plays and musicals including Phantom of the Opera, Beauty & the Beast, and more.

Some network TV series have used my warehouse and magic artifact collection as well as some of my illusions too.

What is your most difficult magic trick or illusion?

This used to be a simple question to answer, but I just added several new illusions to the show, so now many of them are tough.

Every show I predict lottery numbers, teleport across the stage, and make a motorcycle disappear. To make things more difficult I have an illusion where I invite 10 random audience members (chosen by frisbees) onstage to surround the illusion as it happens. This is the most difficult one I do now.

The single most challenging one was when I made a 20-ton armored truck appear onstage. It was for a Caesars promotion, and in front of about 15,000 spectators before an NBA finals game. The truck had a million dollars in cash inside, and I only had two weeks to create the illusion and engineer a special stage to hold the weight of the truck.

Keep it entertaining. One magician told me it’s most important to make sure things are entertaining so that the audience has fun, and so do I.

Toughest question so far! I love music. For my show, to listen to at home, traveling, working out. One of my many favorites: Cryin’ by Aerosmith. I loved this song when it came out when I was a kid, and still love it today. I guess it reminds me of the time I just got into magic and started on this path.

I don’t usually have normal days. I’m usually in a different hotel in a different time zone. I make sure I workout, eat good healthy meals, check in with friends and family. I practice some elements of the show or work on new ones and I like to read or watch a movie or show on my list.

I am a Disney park addict. I have an annual pass to both Disneyland & Disney World, and go as often as I can. And in 2016, on my first break in a long time, I visited every Disney park on the planet.

I also do triathlons when my schedule allows.

I love to cook. I travel with a road case containing a mini kitchen so I can cook and eat healthy on the road.

Still loving this. I have many ideas for new illusions and for the show that I want to implement, but as long as I am still reaching lots of people, sharing magic and wonder, I will be happy.

What’s one of the funniest or crazy things that has happened to you during a show or an event?

Because of magic, my team (I travel with about 20 people to put on my show) and I rehearse every possible scenario we can think of. This way there is always a plan B, C, D….

Somethings we never planned for are power failures (it’s happened a few times, and always at a totally inopportune moment). One time I was in the middle of an illusion and the power dropped and I had everyone in the audience turn on their phone lights so I could continue. Then we sat in the dark for about 20 minutes and had an informal Q&A session before the power turned back on for the block.

What are the most useful tips you could give to someone who’s just starting out in the magic world?

I got most of my start from books from the library. I try to follow the best advice I got: Make it entertaining and fun.

I am just catching up! I just caught up on and LOVED: Mr. Robot, The Man in the High Castle, London Spy, House of Cards, West World, Sherlock, and others I’m probably forgetting.

A matinee and evening performance? For me an ideal day off (unusual on a weekend) would be a long workout, walk with the dog, having friends over for dinner and watching or going to a movie.

In addition to my military tours, I support animal rescue groups. I do benefit shows for a few groups to raise funds and awareness. I’ve always had a dog, and all of my dogs have been rescue dogs. I have a great dog that travels with me and is in the show. He’s my best pal, and we love to support other animal rescue groups.

What an amazing and evolving way to communicate.

Quote: “If you can dream it, you can do it.” Walt Disney