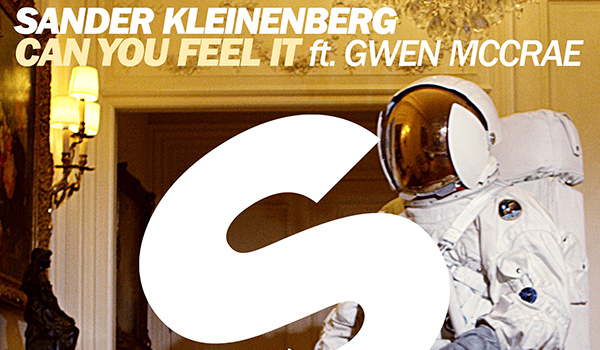 SANDER KLEINENBERG ‘CAN YOU FEEL IT’  OUT NOW ON SPINNIN’ DEEP He may have been responsible for one of the biggest disco infused anthems of the summer, however, in what can only be described as true Kleinenberg style, Sander has once again defied convention as he delivers his highly anticipated future house follow up ‘Can You Feel It’ – out now via Spinnin’ Deep.

BUY SANDER KLEINENBERG’S ‘CAN YOU FEEL IT’ ON BEATPORT

LISTEN TO SANDER KLEINENBERG’S ‘CAN YOU FEEL IT’ ON SOUNDCLOUD

Recently premiered on Pete Tong’s esteemed BBC Radio 1 show, ‘Can You Feel It’ has commanded further support from the likes of Danny Howard, David Guetta, Dimitri Vegas & Like Mike and Martin Solveig among others. With an honest and meticulous eye to detail that can only come from years spent in the studio honing and evolving his craft, ‘Can You Feel It’ is an impeccable future house production with a soulful twist. Featuring the inspiring vocals of true music royalty Gwen McCrae – best known for her 1975 hit ‘Rocking Chair’ and Avicii and Cassius’ heavily sampled ‘All This Love That I’m Feeling’– the sample has migrated from DAT tape to CD to Hard disk in Sander’s library and has finally found the home it deserves. With ‘Can You Feel It’ Sander demonstrates a seamless ability to connect artists from across the music spectrum whilst further defying classification.

WATCH SANDER KLEINENBERG ‘CAN YOU FEEL IT’ (OFFICIAL MUSIC VIDEO)

Renowned for his union of visual and musical moments, it is only fitting that the Dutch maestro has produced an incredible music video in tandem with the release of ‘Can You Feel It’. Produced by Amsterdam based creative agency …,staat and filmed at an exclusive Sander Kleinenberg party at this year’s ADE, the video follows one man’s wild night as he continues to drift in and out of reality and deeper into the beat. Visually striking and equally as alluring, the juxtaposition between fact and fiction ensures viewers are in for an equally wild ride.