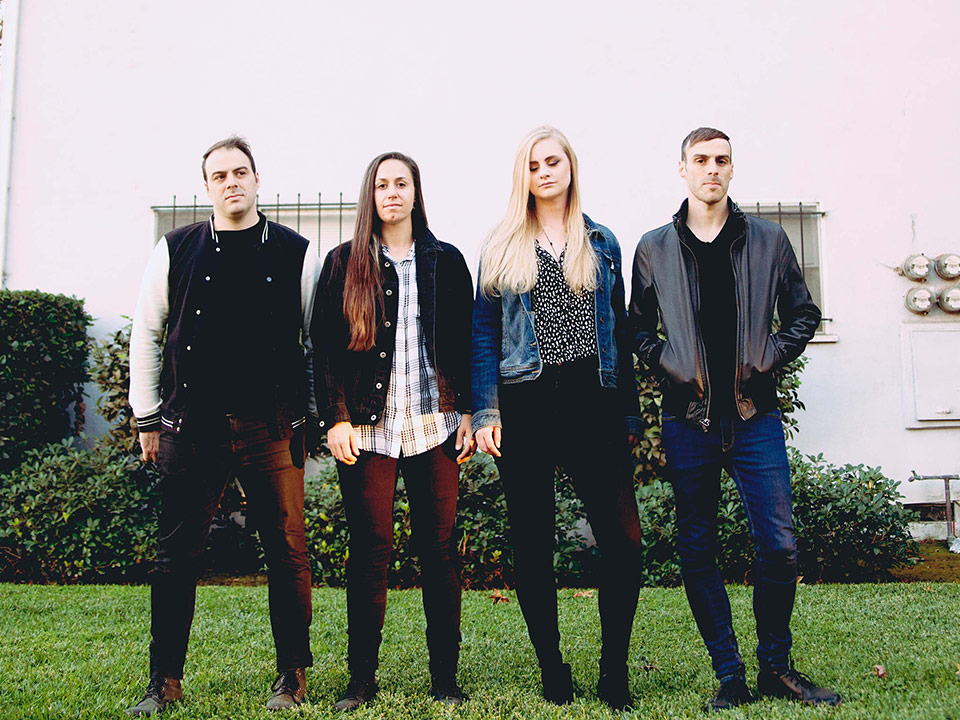 Hi guys, please tell us a little about you!

Amber: Hi! I’m Amber and I sing and write songs in Sleeplust.

Mike: Well my name is Michael Pepe and I play guitar in Sleeplust and I help write the songs along with the rest of the band. I also have the pleasure of recording and mixing the records for us.

Sarah: I’m Sarah and I play drums in the band!

How you pick the name Sleeplust?

Joe: We get this question a lot, it actually comes from Jack Kerouac’s book “On The Road.”

What inspire you to write about Sedona?

Amber: I was on a trip with my fiancé for our anniversary to Sedona and reflecting heavily on our relationship. We have always encouraged one another to chase our dreams despite any naysayers.

What’s the best and hardest part of being a musician?

Amber: Having a creative outlet through songwriting and performing is the best part. Trying to balance somewhat of a social life outside of music is probably the hardest part.

Joe: The best is by far creating and playing music for people. To go into the studio one day with a blank screen and at the end of the day come out with something you can’t wait to show everyone is the best feeling. The hardest part is just the balance between running and business and being creative. We’re currently doing most everything ourselves without a team so it’s a lot of planning. But honestly there’s nothing in the world that gives us as much satisfaction from hustling for our art.

Sarah: Managing time. At this point in my career I have to have income therefore I’m working a job, doing Music, juggling time for friends and family.

Mike: The hardest part about being a musician…hmm, that’s a tough one because I sincerely enjoying being one so much. I’d say probably nowadays because there’s SO much music in the ether it would be simply finding the audience that cares. It’s almost to a point where there’s TOO many places and ways to discover music that no one is committing to be a BIG fan anymore because their attention is constantly being turned by something else.

Amber: Don’t let your fears control your life and don’t be afraid to fail.

Joe: My mentor Steve Rennie said it best “You don’t ask, you don’t get!”

Mike: Best advice I’ve ever been given…take a deep breath, count to 3

Joe: My musical role model is definitely Butch Walker. The way he has created his career without anyone else and has made a great life playing and producing music is something I try and follow myself.

Amber: My mom because she’s the best.

Mike: If we’re speaking about a music role model then hands down it would be Robert Smith of The Cure. Robert has always been unapologetically himself. He’s also made his records his way and has never really made any sacrifices in what he’s done and gotten popular from being that. He’s mixed and made a lot of The Cure’s records, he wasn’t even a singer to begin with and thought he was the only one that could really fulfill his own vision. He truly has a punk rock attitude.

If we’re speaking in the grander scheme of life it would no doubt be my father. He’s the most honest, hardworking, sweetest man ever and he shaped me into the guy I am today. He’s loving, accepting, smart and always taught me how to approach things with a level head but while also honoring my emotions. He’s really guided my path to becoming a human in more ways than I could ever explain.

Joe: We’ll be releasing a new single then we finally get to put out this EP we’ve been working so hard on! Other than that we’re playing some great shows throughout the Spring and Summer.

Joe: I love writing and producing for other artists so much as well! Other than that I’m a huge foodie and I love to cook.

Sarah: Working out and Fashion.

Mike: I love cooking and making recipes! It’s one of my best outlets. I also love poetry (specifically Bukowski) and video games. Just some of my hobbies besides music; which is a hobby in and of itself but also my living and I’m very lucky to make something I love so much my living as well.

Amber: Coffee, tacos and my guitar.

Joe: Hmmmm… maybe not questioning what my gut is telling me.

Sarah: Being able to listen to a song and learn it quickly.

Mike: One of my strengths…well, I produce records for a living in addition to playing in Sleeplust so I think a strength are my ears. I feel like over the years of making records I’ve trained my ears to know frequencies, melody, picking part(s) and my taste of what sounds ‘good’ and what will ‘connect’ with an audience.

Tell us your favorite record your listening to?

Amber: After Laughter by Paramore

Mike: Favorite record I’m currently listening to…well, I just recently went back to It’s Blitz! by Yeah Yeah Yeah’s so even though it’s not a current release it’s still my favorite right now.

Amber: I would love to meet David Bowie for obvious reasons. He was such an amazing human and musician.

Mike: Living or Dead…definitely Robert Smith. He’s my ultimate musical hero. He’s done things his own way for so long and has never been something he’s not. He’s carved out a great piece of the industry for himself and is truly a living legend. He has so much knowledge on not only music but also living a path of being an individual artist. It’s really just SO inspiring to me.

Idea of a perfect day off?

Joe: Perfect day off? Knowing myself I know I’d end up sitting down at my home studio and writing something. Going to dinner with my wife at Osteria la Bucca would be in the game plan somewhere.

Amber: Hiking up a mountain on a 70 degree day and taking the time to just breathe and exist.

Sarah: Laying at the beach

Mike: Absolutely! Planned Parenthood and ACLU right off the top of my head!

Interview with “One Upon a Time … In Hollywood” actress Nichole...

Interview with Netflix’s “Made in Mexico” Hanna Jaff Bosdet