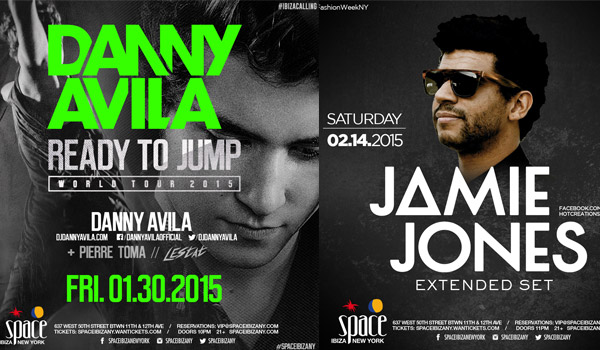 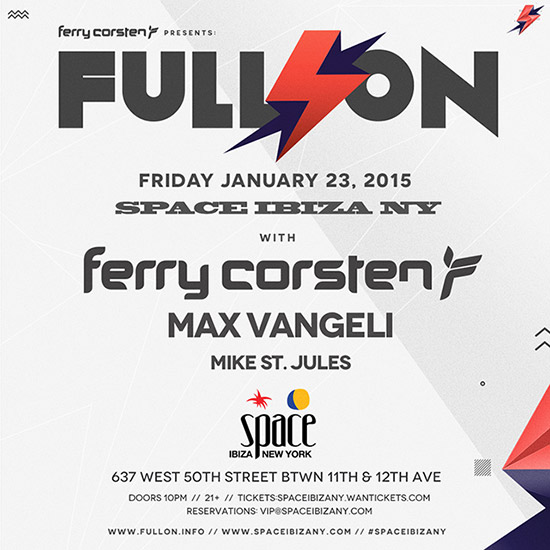 Dutch DJ, Ferry Corsten and Max Vangeli will invade Space Ibiza New York on Friday, January 23rd . Max Vangeli, who was named by MTV as, “one of the most promising artists of the year in 2011,” has collaborated with megastars, Steve Angello and Tiesto and has produced multiple chart-topping remixes. Legendary for his “trance” tracks, Ferry Corsten has become a main stage regular at Electric Zoo and holds the highest amount of dance singles on the UK charts. Corsten, along with his solo set, brings with him guest jocks for a “full on,” big stage performance.

Serge Devant and Alex Kofman will be celebrating birthday fiestas at Space Ibiza New York on Saturday, January 24. Resident DJ at Space Ibiza NY, Alex Kofman brings his passion, deep house music genre and experience to create a sexy and energetic night for dancers and club goers alike. Hitting DJ magazine’s Top 100 and DJ Tiesto’s top 5 favorite DJ Lists, Serge Devant is one of the most promising talents in the EDM world today. His stylistically diverse sets and melodic sounds are sure to take over the night leading you dancing till daybreak. 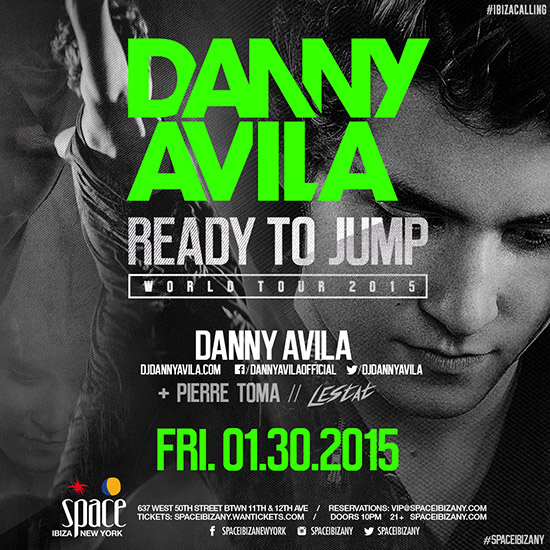 Head to the west-side hot spot to catch Danny Avila and Pierre Toma on Friday, January 30th 2015. Setting off the night, Brooklyn born Pierre Toma returns to Space Ibiza bringing an impressive list of performed venues and celebrity fans such as G-Unit, Pitbull and Fat Joe. Debuted at Ultra Music Festival and identified as “artist to watch” by MTV and Billboard, Danny Avila has become one of the hottest DJs in the EDM world. Avila, known as EDM’s protégées, brings a maturity and study to his sound that evades his years and leaves you yearning for more.

Get ready for a legendary night with megastar partners Victor Calderone and Mike Frade. Both New York born and raised, the two have taken over the underground house music scene with their own music label, Waveform Recordings, and will bring their captivating and stylistically unpredictable sets to the New York hub of house music. Since kicking-off his career in the mid-90s Calderone has been commissioned to mix tracks for legendary artists such as Madonna, Sting, Whitney Houston and Janet Jackson (just to name a few) and is no stranger to the Billboard dance charts. Calderone and Frade alike bring an unmatched sound and undisputed excitement which will reverberate throughout the west side streets. 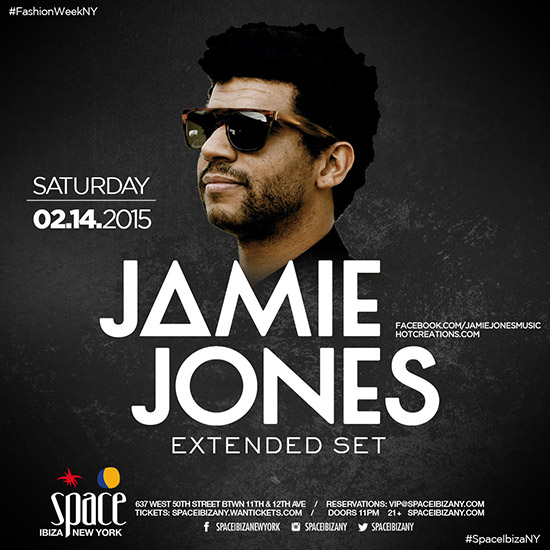 One of techno’s rising stars, Welsh DJ Jamie Jones, is set to bring his melodic, deep techno sounds to Space Ibiza New York on Saturday, February 14. Jones has spun at the world’s biggest music festivals such as Tomorrowland and Time Warp and his debut album, “Don’t You Remember the Future” has been hailed by Dance Music critics as one of the best electronic music albums of 2009. Jones offers a wide range of styles while preserving his warm signature sound. Offering up a massive double dose, the European disc jockey, will present club goers with an unforgettable night of varied sets and dancing.

EDM’s first sisters and DJ Dynamos, Mim and Liv Nervo, will bring their unparalled sounds and superstardom to Space Ibiza New York on Friday, February 20th. Having written smash singles for Ke$sha and co-writing the Grammy-award winning “When Love Takes Over” with David Guetta, the worldwide top-ranking female DJs set off to release their own music with top producers such as Afrojack and Steve Aoki. The regular Electric Daisy Carnival, Ultra Music Festival and Electric Zoo main stage performers are set to bring their deep, fearless, energy infused music for a superstar night at the Hell’s Kitchen EDM hot spot.

Prepare for a mega dance event with Dubfire and SHADED on Saturday, February 21st. SHADED’s funkadlic techno sound, original jams and dance remixes have garnered the attention of EDM fans around the world. SHADED’s self proclaimed “controlled chaos” is sure to have you dancing through the night. Recognized as EDM’s most Versatile artist, Dubfire brings a resume of dance classics, a Grammy for Dido’s “Thank You” remix and over 20 years behind the turn tables. Titled as “the DJ’s DJ,” Dubfire’s groundbreaking, organic and pioneering sounds are set to pulsate through Space Ibiza New York’s speakers.

Tickets not yet available. 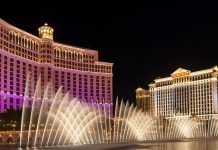 Things to do in Vegas for LDW

Ignite Celebrates Love and Cannabis with Performances by Cardi B and...