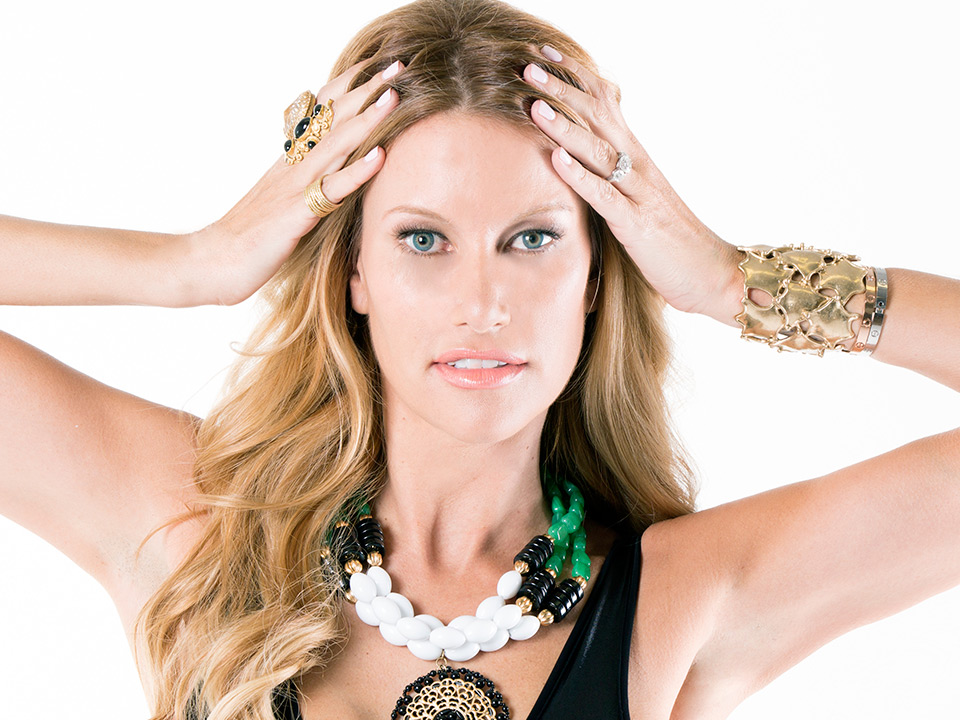 What first sparked your interest in design for your swimwear collection?

I always had a passion for fashion; I was even the President of my sewing club in high school. I always kept swimwear design in the back of my head (growing up on the beaches of San Diego probably didn’t hurt either). While modeling and doing fittings for such stellar designers like Yves St. Laurent and Karl Lagerfeld, it would be a sin to not be inspired to continue to pursue my dream of designing swim and resort wear.

You have a huge number of fans due to your modeling career, how would you describe your fans?

I’m very blessed. I honestly have some of the nicest fans! They are very diverse too; they come from all different ethnicities, cultures, genders and age groups. They are so sweet. My fans will often send me drawings or portraits of me with a request for an autograph or an important question they have for me regarding modeling or fashion. They are very kind and make me feel so smart and important.

You are also very busy, what’s it like to juggle being a mom and maintaining your own business?

I’m not going to sugar coat this, it requires a lot of discipline and organization with your time. Whether I’m writing my next Huffington Post column, cooking dinner for my family, or gathering swimsuit orders from around the globe from my online shop SusanHolmes.net, I thrive on structure and a definitive schedule to carry me proficiently through the day.

You are married to Duff McKagan; what’s it like being married to a music legend?

It’s quite fantastic! I find I am constantly proud of him. He recently released his own book “It’s So Easy and Other Lies” on Simon & Schuster and it was an instant NY Times Bestseller!

He’s a ridiculously talented musician, playing almost every instrument and he sings. He formed not one, but TWO insanely ferocious bands (Guns N’ Roses, Velvet Revolver).

Most importantly, Duff is a loving and committed father, best friend, and husband.

Is it hard for you both to be supportive of each other, since you both have very busy lives of your own?

We make the time–you absolutely have to. My motto is always “family first.”

How does it feel being known as a power couple of the celebrity world?

Spectacular! We have both worked arduously to get to where we are at this point in our lives. I say embrace it, and be thankful to see the fruition of love and care pay off. Also, it’s a fantastic platform to give back and to help various charities we admire. We support PETA’s “Ink Not Mink” campaign, The Surfrider Foundation and The Red Cross, etc.

How did you start in the modeling industry?

I was seventeen and eating in a restaurant in NYC with my mom. Famous fashion photographer Marco Glaviano was eating with Jodie Foster at the table right next to us. He asked if I was a model, if I had an agent, and to go see Eileen Ford first thing if not. That definitely gave me a boost of confidence to further pursue modeling after I completed high school.

How do you think modeling has shaped your view on fashion and design?

It was probably the greatest behind the scenes education I could have asked for. I had an insider’s look at how a collection was made from a drawing to the finished product on the runway.

When did modeling fame really start happening for you? Was there any particular shoot that gained a lot of popularity?

I would say it was my consistent editorial features and covers around the world. It’s hard for me to pinpoint one particular shoot, but once you’ve been on the cover of Vogue multiple times, people definitely start to take notice.

What’s your favorite part of modeling?

Besides being immersed in lots of fabulous fashion, I truly love to meet new friends! Modeling introduces you to so many vivacious and fascinating people. I am so lucky to have friends from the industry in all parts of the world.

What is one of the more stressful parts about designing?

It’s demanding because you are dealing with many strict deadlines. Stores make floor space for their order on your line and if you are late once, they often think twice about reordering from you. However, when you get to do a very special design for an exciting feature or cover (ie., Sports Illustrated Swimsuit Edition) it’s very rewarding.

You have two daughters; do either of them show interest in the fashion world?

My oldest daughter Grace (16) is a trained vocalist and singer for her band “The Pink Slips” and they’ve been playing gigs nationwide now. She was flown to NYC via helicopter for her first show and then made a red carpet appearance for the CBGB film festival and played a show after. She absolutely incorporates an edgy style with her stage persona. At the moment, she is extremely inspired by Skye Ferreira, Gwen Stefani and style icon Alexa Chung. Mae (13) is influenced by Ariana Grande and Rihanna. I think she will gravitate to the fashion world too, but particularly in make up. I feel like part of the Sephora store is now open in her room.

Was it hard to pick up fashion designing?

No, I used to make and sew my own bathing suits for fun growing up in San Diego. I always had it in the back of my head that designing would be a dream of mine. It’s a creative outlet that keeps me fulfilled and happy.

Who inspires you in your work?

My teenage daughters keep me in the loop with what’s on trendy and cool. I’m also influenced by my travels, whether it’s stemming from the beautiful colors from a sunset I saw in Costa Rica or stunning countryside flowers in France. Lastly, I am hugely inspired by music. I love to gaze through album covers for strong visual concepts from Prince to Bridget Bardot.

Who was the most charming celebrity you have ever met in all of your work?

What advice would you give to other moms who struggle to balance their work and parenting?

Don’t beat yourself up. Wasn’t it Oprah who said being a Mom is probably one of the hardest jobs in the world? You’re on call 24/7 and responsible for raising a strong and smart human being. That being said, get up everyday and be thankful for another new blessed day with your children and work. Try and keep to a schedule. I find that routine helps keep a sense of balance and kids thrive on that. Also always keep a large wall calendar to write everyone’s appointments, games and meetings on.

What’s the most rewarding thing about modeling?

I have met amazing people from around the world. I learned from working with the best in the field how to apply makeup, dress to best flatter others and myself, and how to pose and look thin at all times. I learned how to walk elegantly and make any dress look like a million bucks. I even learned how to order food in Italian, French and Japanese! Most importantly, I learned how to be comfortable in my own skin.

What’s the most rewarding thing about being a mother?

I wake up everyday thanking my lucky stars for being blessed as a mother of two healthy, happy daughters. I always wanted a family and I appreciate that I have been blessed with this. There are so many rewarding things, where do I begin? Who can ever forget the first time their child says: “I love you” to them? It’s simply awesome when they smile or look at you the way only a child can to their parent. It fulfills you as a parent knowing you have given back to that tiny person and you are trying your best to prepare them for this insane world.

Because I travel so frequently, there’s really no such thing as average/normal day. On a day home, I would say it starts off with a cup of strong coffee my hubby makes for me, then I work out for an hour, take a shower, and depending on what my work entails that I oversee the patterns, trim and production on my line. If I’m doing a TV/news show, Demand Media Studios video, or photo shoot, then I rally my glam squad and swimsuits to be as productive as possible there with the promotion of my line. Then I stop at the market, pick up some fresh organic produce, and try and whirl up a tasty but somewhat healthy dinner for the fam. After dinner I like to catch up on phone calls, e-mails, Twitter and Instagram. I usually always crave some sort of chocolate (lately I’ve been obsessed with dark), then I catch up on my favorite shows (Girls, True Detective, Bill Maher “Politically Incorrect”, Real Housewives of Beverly Hills) or a movie with Duff. I always read before I go to bed. I am currently reading “The Alchemist.”

You look amazing! How do you stay in such great shape?

Well thank ya!! That is very kind of you. We had an old barn and stables on our property and we turned it into a gym. I love to get up and work out on the elliptical machine for forty minutes while watching the morning news. I also do small weights, an ab floor work out, and lunges across my yard. I am a big fan of hiking, spinning and zumba as well. The key is to mix it up so you’re never bored. It also shocks the muscles a bit that way as well.