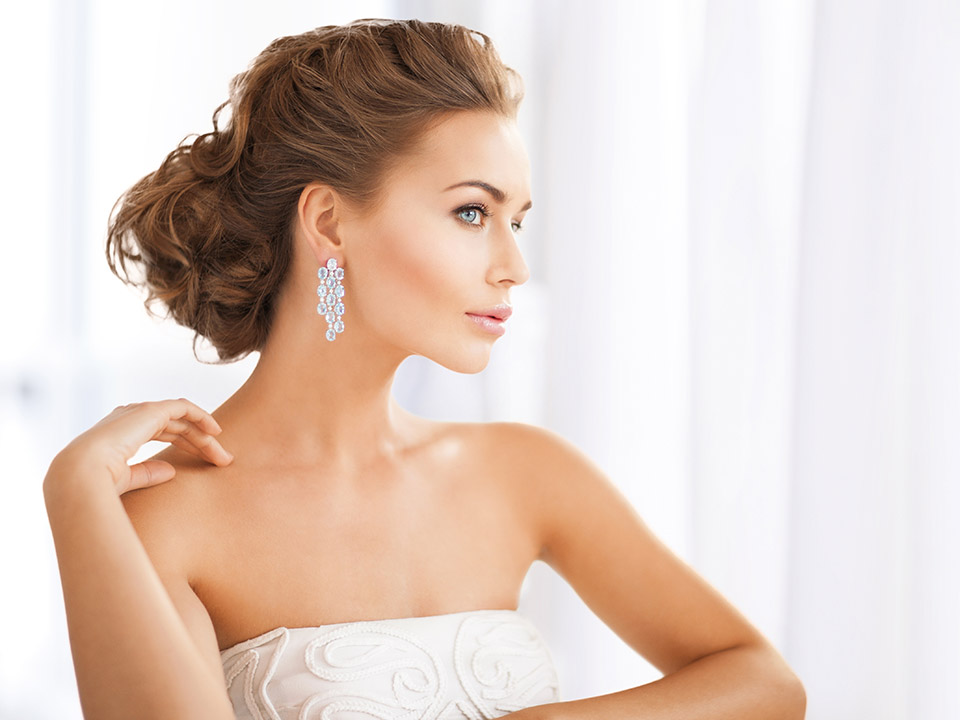 When it comes to beautiful, sparkling jewellery many of us will automatically think of diamonds and gemstones. However, there are a number of issues surrounding the mining of real gemstones such as human conflicts and damage to the earth. Many people are now looking for alternative choices, and luckily there are plenty of other options to choose from. In this post, we will cover some of the issues surrounding mined gemstones and why they are beginning to fall out of favour. We will also provide you with the alternatives there are to mined diamonds, and what their many benefits are. Keep reading if you would like to find out more.

The Environmental Impact Of Diamond Mining

Despite efforts to reduce the impact of diamond mining on the environment, it still has a big impact in a number of ways. Demand is still high, so mining has to expand into new areas and habitats. This affects animals and wildlife as their homes get disturbed by the mining processes, as well as putting them in danger. Some animals are forced to migrate, leading to unnatural species habits. Trees have to be cut down to make way for the mining areas, leading to deforestation. When new mines are created they sometimes require the creation of new waterways to reveal diamonds. This can lead water sources away from local villages and sources for wildlife, meaning they can struggle to survive. Changing the routes of rivers and streams can affect entire ecosystems and makes a big impact on the environments in which diamonds are mined. There has also been contamination linked with diamond mining as some toxic substances can be produced and released into the water sources during the process of extracting diamonds. Mining also affects the soil around the mining area as fertile top layers useful for growing much-needed crops get stripped away. As the soil can no longer be used for farming, it affects the livelihoods and health of surrounding communities. The water pits created during mining also leave pools of stagnant water, creating a breeding ground for mosquitoes carrying deadly diseases, and waterborne viruses.

You might have heard of the phrase “blood diamond” or “conflict diamond” before. The reason some diamonds are given these titles is due to the circumstances in which they are obtained. There are many corrupt mining processes going on in African countries in order to obtain diamonds, sell them, and use the money to fund civil wars. These diamonds come at the cost of awful human suffering and death. The individuals mining the diamonds are sometimes forced to do so through slave labour and have no human rights. The Kimberley process was brought out in 2003 to attempt to eradicate the selling of blood diamonds. However, there is still a lot of work to be done to take blood diamonds out of the market for good. 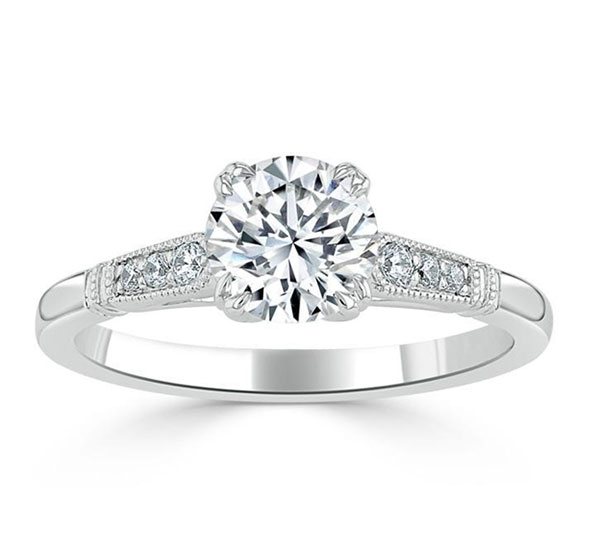 An increasingly popular alternative to mined diamonds are man-made diamonds. These diamonds are identical in appearance to naturally sourced diamonds, but come without any of the issues surrounding mining them. Although they are man-made in labs, they are still classed as real diamonds as they still have the same carbon base. The environments in which diamonds are made are recreated in laboratories but at an accelerated pace. Carbon is heated in extremely high temperatures and high pressures. It then becomes a molten liquid which goes through a long cooling process to create crystallisation. The time it takes to create new diamonds varies depending on the company producing them and the quality they are attempting to achieve. Natural, mined diamonds on the other hand, take billions of years to form in the Earth’s crust.

As they are created in labs, these diamonds do not require any mining processes to obtain them. They remove the risk of blood diamonds as they can be sourced to where they were created and require no human labour from other countries. They also don’t impact the local environments and communities in which diamonds are typically mined. Cutting out the mining process reduces deforestation, damaging effects on wildlife, damage to water sources and soil, and damage to natural resources in the Earth. They also tend to come with a lower price tag than mined diamonds. So, you can save money and have a clearer conscience. 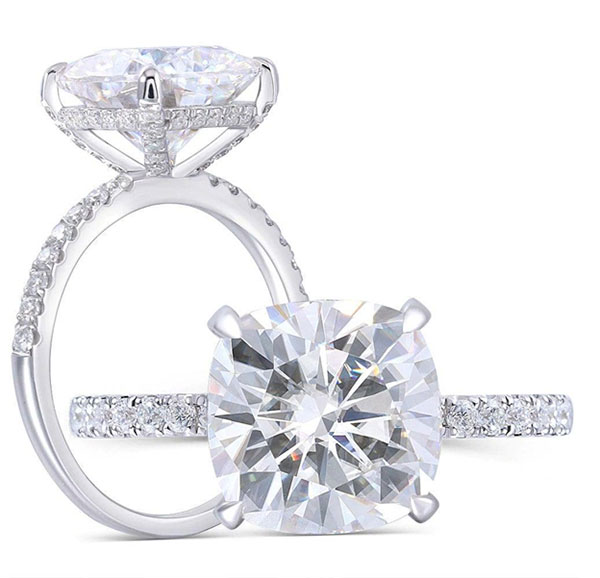 Another alternative to mined diamonds are moissanite stones. Naturally sourced moissanites are found in meteor craters so therefore are extremely rare. Due to this rarity, moissanites available on the market are created in labs similarly to man-made diamonds. Many people may have worries that moissanite doesn’t have the same beauty as a diamond and it is true that moissanite doesn’t rate as quite as highly as diamonds for their sparkling effect. However, moissanites actually provide a stunning sparkle similar to a diamond. They make the perfect option for those looking for a premium piece of jewellery with the same wow factor as a diamond at a more affordable price.

Like man-made diamonds, moissanites have great appeal as they avoid the human and environmental issues surrounding mined diamonds, whilst still making for a beautiful piece of jewellery. They are also incredibly durable and can withstand scratching and knocks very well. They are even more durable than gemstones such as emeralds, rubies, and sapphires. Due to this, many people choose moissanite as the stone for their engagement ring. Whilst most popular for their role in engagement rings, moissanite looks stunning in any jewellery as a diamond alternative.

Cubic zirconias are the most affordable alternative to diamonds. They have a limited supply naturally, so they too are usually man-made in labs. They don’t quite have the same sparkling brilliance as diamonds and moissanites and can appear slightly cloudy. They also reflect light differently and produce a rainbow effect in their reflection, which is a giveaway sign that it is not a real diamond. It will depend on the quality of the cubic zirconia as to how much it sparkles. They are also more susceptible to damage, and can be easily scratched and become cloudy over time. However, these stones make a great alternative to diamonds due to their affordability and lack of issues surrounding them.

One of the less well-known alternative options to diamonds are white sapphires. They are more affordable than their better-known blue counterparts and cheaper than mined diamonds. Like man-made diamonds, they come with the ethical benefits of not involving any mining. Man-made white sapphires have a stunning sparkle and are identical to naturally sourced white sapphires. They make for a beautiful alternative centrepiece in an engagement ring. And they are becoming increasingly popular too as they provide something a bit different for couples who don’t want the same diamond ring as everyone else. It’s worth bearing in mind though that lab-grown white sapphires cost more than other options such as moissanite and cubic zirconia, so won’t be as affordable for an engagement ring. 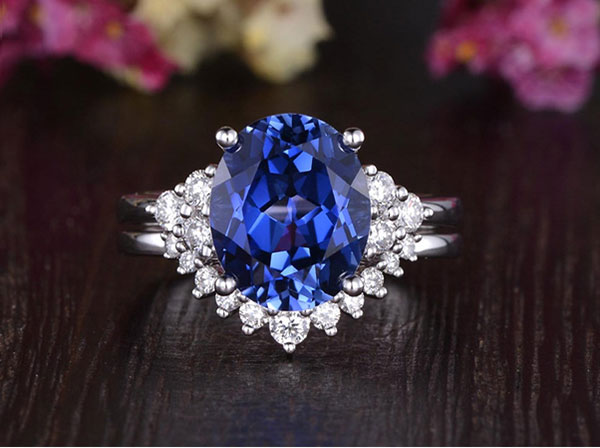 If you’re looking for something a bit different for an engagement ring or other piece of jewellery, other coloured gemstones are also available in man-made form. Mined, coloured gemstones don’t have the same level of risk of being unethically sourced as diamonds due to them not being as highly in demand and more easily sourced. They also may not have the same impact on the environment as their mining tends to be on a smaller scale than diamond mining. However, there is still a chance they could be involved in funding conflicts. Rubies, emeralds, and sapphires can all be lab-grown like diamonds, so you can avoid the environmental and ethical impacts of the naturally sourced gemstones. The clarity and sparkle of lab-grown, coloured gemstones will depend on the quality and price, and both could vary widely.

A good way to reduce the number of diamonds being mined is to buy second hand and vintage pieces of jewellery with diamonds in them. Making use of diamonds that already exist in jewellery will help to prevent damage caused by mining to the environment and prevent funding for human conflicts. The only downside is that some of the diamonds that are already in circulation as vintage pieces could be tainted by the fact they were originally sourced as blood diamonds.

There are many options to choose from to avoid supporting unethically sourced mined diamonds, and we hope this article has helped to highlight what these are. It’s important to spread the message around the impact mining diamonds is having on the environment, civil conflicts, and the local communities. Choosing a diamond simulant or lab-grown diamond is a great way to make an ethical choice, whilst still gaining a beautiful piece of jewellery for you or a loved one. 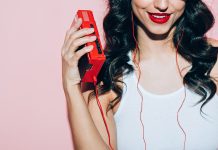 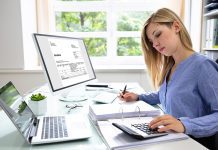 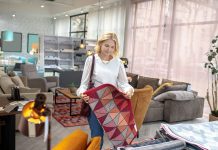 How a Weighted Blanket Can Help You Sleep