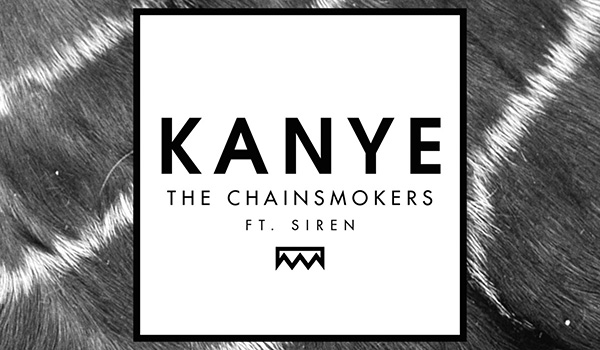 THE CHAINSMOKERS debuts the Louis the Child remix of “Kanye” [featuring SirenXX]. Take a listen at this link.

This remix paves the way for two forthcoming “Kanye” remix packages from the New York duo. The first arrives at all online retailers on October 21 and boasts remixes from Don Diablo, Ookay, and Chardy, while the second becomes available on November 11 and features Steve Aoki & twoloud, Riggi & Piros, and Reece Low.

Chicago producers Louis the Child inject their own spark into the uplifting and undeniable single from THE CHAINSMOKERS. Hear it now!

In addition to building on the mythos and magnitude of “Kanye”, the platinum-certified pair of Andrew Taggert and Alex Pall have lined up a bevy of tour dates, building on the success of their international “King Of Me” tour. They hit the road on October 17 at District Square in Kalamazoo, MI with dates throughout the U.S., Mexico, and Puerto Rico.

Since its premiere, the enigmatic music video for “Kanye” has accrued over 1.5 million views and counting.

It’s been a landmark year for THE CHAINSMOKERS. MTV recently crowned the group an “Artist to Watch”. “#SELFIE” was officially certified platinum by the RIAA for digital sales in excess of 1,000,000. The song also soared to #1 on Billboard’s Hot Dance/Electronic Songs Chart within merely five weeks and reached the Top 5 on iTunes in over 43 countries. “#SELFIE” is Top 10 on YouTube’s “Top Music Videos of 2014“. Furthermore, it garnered a nomination for “Choice EDM Song” at the 2014 Teen Choice Awards and the guys have been receiving tremendous support for DJ Mag’s “Top 100 DJs”.

Already, THE CHAINSMOKERS  has been supported by Nicky Romero, Steve Aoki, Pete Tong, Afrojack, Tiësto, W&W, and more, as well as receiving shout outs from the likes of Rolling Stone. In addition, they’ve been tapped for remixes by everybody from Phoenix, Ellie Goulding, and The Wanted to The Killers and Icona Pop. Their remixes continually shoot to #1 on the HypeM—with 24 in total topping the chart.  The duo is represented by Disruptor Management.  DIM MAK/REPUBLIC RECORDS is excited for what’s to come from this American dream team.

Swedish House Mafia “Leave The World Behind” – More Than 50...