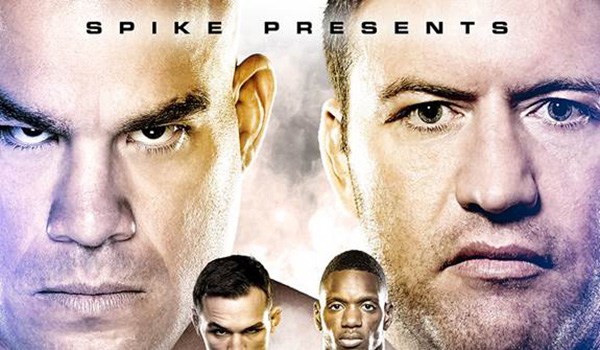 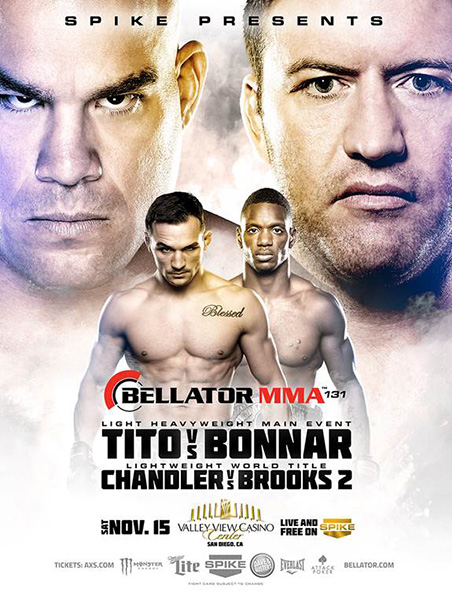 Bellator MMA is primed for one of the biggest events in promotional history as San Diego’s Valley View Casino Arena will host Bellator 131 on Saturday, November 15th live and free on Spike TV. The night will feature one of the biggest grudge matches in the sport as MMA icons clash when Tito “The Huntington Beach Bad Boy” Ortiz returns to the Bellator cage to face “The American Psycho” Stephan Bonnar in a light heavyweight affair, while Will Brooks and Michael Chandler will battle for the vacant Bellator Lightweight Title.

Tickets are on sale Friday, September 12 and will be available at the Valley View Casino Center Box Office, axs.com or Bellator.com.

Ortiz enters the fight fresh off his dominating victory over current Bellator Middleweight Champion Alexander Shlemenko at Bellator 120. Having fought some of the best in the world including Wanderlei Silva, Vitor Belfort, Forrest Griffin and Ken Shamrock, Ortiz is looking to add another big victory to his already impressive career.

“This fight is as personal as it gets,” Ortiz said. “I don’t dislike many people but I can honestly say I hate Stephan Bonnar. I’m not just going to beat Bonnar, I’m going to torture him. This fight is for my fans and the MMA world. Stephan Bonnar is a phony and I’m going to show the world he isn’t on the same level of a fighter as I am. The Huntington Beach Bad Boy is back for this fight because #BitchBoy Bonnar is getting a bad beating from me.”

Fighting in front of millions on Spike TV against the likes of James Irvin, Keith Jardine, Rashad Evans and an iconic showdown with Forrest Griffin, Bonnar has established himself as one of the biggest personalities in the sport during his nearly 15-year professional career. Last competing in 2012 against Anderson Silva, Bonnar has had his sights set on Tito for years, and is ready to finally lock horns with the MMA icon.

“It’s a great honor to fight a former world champion and a true legend of the sport like Tito, his skills and accomplishments cannot be denied,” Bonnar said. “Unfortunately, his character certainly can. This is a guy, Tito Ortiz, who’s screwed over everyone that has supported and helped him throughout his career, and I have no mercy for a selfish, self-absorbed guy like Tito. I’m not going in there just to hit him on the chin and be done. That’s not what this fight is about. He’s going to suffer, I’m going to savor every minute I have in there with him. I’m going to close his eyes, punish his body, then take a step back, so I can do it some more.”

The night will also feature a rematch MMA fans have been clamoring for as Michael Chandler will return to the cage once again fighting for the title against current Bellator Interim Champion Will Brooks. The two met at Bellator 120 and after a close back and forth affair, Brooks was awarded victory and claimed the Interim tag. With both fighters primed and ready to once again battle for the belt, San Diego will be in for an incredible rematch on November 15th.

“I’m really excited about the opportunity to fight Will again,” Chandler said. “I believe I’m the better fighter than I showed last time and I look forward to getting my belt back in front of a huge San Diego crowd.”

“I can’t wait to fight Chandler again and continue to progress from the last fight, Brooks said. “I feel that I found a weakness in his armor with the last fight, and came very close to breaking through and finishing him. I’m going to push him again, this time I’m going to break him, there will be no trilogy fight between Chandler and I. I’m going to finish what I started the first fight and expose him for what he is, a one dimensional fighter.”

More fight announcements will be made in the coming days on Bellator 131.