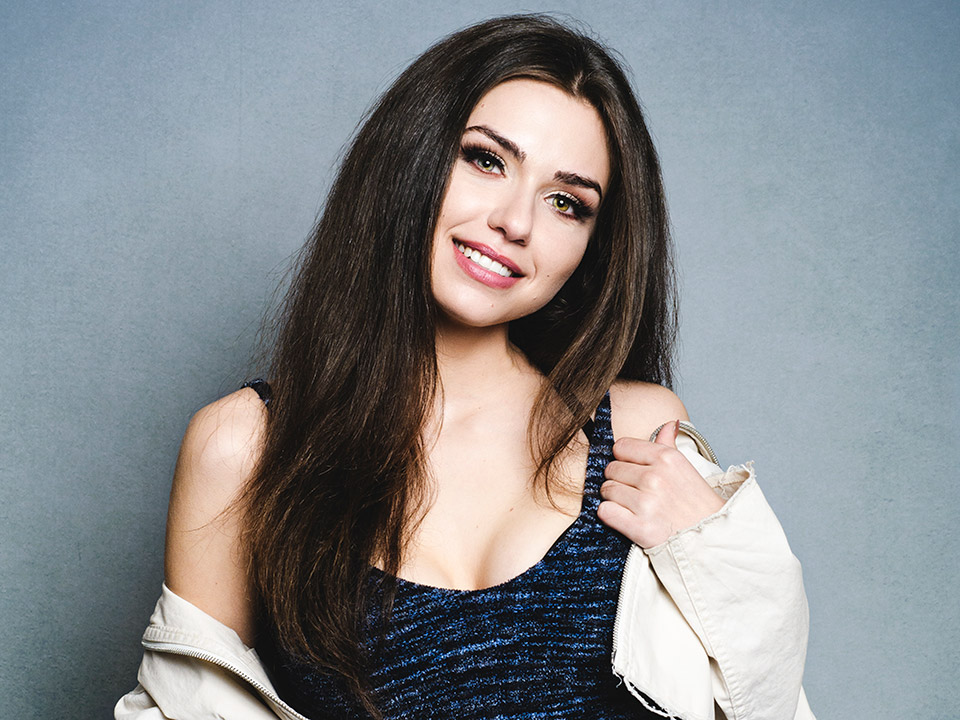 Our interview with gorgeous actress Victoria Konefal who can currently be seen as Ciara Brady on the Daytime Emmy-winning soap opera Days of Our Lives, a role she took over from Vivian Jovanni. The daughter of power couple Bo and Hope Brady, portrayed by Peter Reckell and Kristina Alfonso, Ciara is a fierce young woman with a rough past. Despite issues with the law and her parents tumultuous relationship, she is growing and maturing into a strong individual who is making her mark on Salem.

She has also showcased her dramatic talent in the Lifetime movie The Wrong Crush where she plays a addict who gets mixed up with the wrong guy. In that film she worked alongside Vivica A. Fox and Lesli Kay. Konefal has also started in the Lifetime movie Deadly Exchange as Blake Winters. In the story, Blake’s twin sister dies in a tragic accident so her mother, played by Lindsay Hartley, brings in foreign exchange students to help ease Blakes pain, but strange things start to happen upon their arrival.

Konefal can be seen also as a guest appearance of the Emmy Award winning hit comedy Modern Family.

Hi Victoria, please tell us a little about you?

My full name is Victoria Angelica Konefal and I was born and raised in New York City. I have a little angel of a puppy named Lola and I am fluent in Polish.

I started by working with this off-Broadway production company called “Brooklyn Heights Players” after seeing one of their shows. I then made sure every school I went to had a drama department that catered to my performance needs. I couldn’t stop.

I did! I went to Fiorello H. Laguardia High School, which is a performing arts high school in New York City. The school admired the arts more than academia, which was something I really appreciated. I’m not saying academics were considered unimportant; it’s just that the students and faculty all valued the creative aspect of life.

The best part is the fact that I get to do what I love most as my job. It couldn’t get any better than that. The worst part is the judgment you begin to face the longer you’re in the game. You learn everyone has an opinion and sometimes its negative, but you also learn to brush it off and only allow the positive to have an influence on the way you’re feeling.

Any other family members in the business?

Nope, I’m the only one. Both of my parents were born and raised in Poland. I’m a first-generation American.

I was seven years old and watching an off-Broadway production of “The Hobbit” is when I decided that was what I wanted to do. Something about the performance drew me into the art of theatre and I’ve been acting ever since.

What has it been like to be part of the Emmy-winning soap opera “Days of Our Lives” cast?

It’s been wonderful! The show has so much history and I’m honored to be a part of it.

Tell us about your role as Ciara Brady?

Ciara is a force to be reckoned with that’s for sure. She’s stubborn, courageous and incredibly bratty at times. She’s just a young lady figuring out what it means to be a woman.

Why do you think soap operas have been so successful?

Our extraordinary fans. The fan base is so strong! Some people have been watching the show for over 30 years. The show and the characters have really become prevalent in their lives, and they consider us family. We owe it to them.

Unfortunately, that would be me arriving to set an hour late. This was recent too, and I’m still incredibly embarrassed. I’m a timely person… that sort of thing never happens to me but I slept through my alarms and felt like a total fool. It happens to the best of us! Luckily, we have an amazing team that came to my house to wake me up (I live 5 minutes away from the studio so it wasn’t a terribly dramatic situation, thank god.) and miraculously got me ready on time. I love those guys.

How did you start on the show?

I auditioned 7 times over the course of two months, and after testing twice I finally booked it.

I have a couple of Indies under my belt! I’ve been in Fog City, The Wrong Crush, The Deadly Exchange, and Circus Kane. I’ve also been in an episode of Modern Family where I played a sassy Russian Instagram model.

Sleeping in of course! Followed by a walk to my neighborhood cafe for a chai and a special breakfast. Then a walk to the park to play with my puppy, and spending the rest of the day relaxing on the beach.

I spend a lot of my free time wandering around in nature. Hiking and beach going or just relaxing with my loved ones.

I watch whatever I can find on Netflix and networks like HBO and NBC.

Salmon is my favorite food period, regardless of whether it’s healthy or not so any dish with salmon is good to me! I like making salmon salads with brown rice or quinoa tossed in to make sure I get my grains.

I love all genres of music; I just listen to whatever reflects what I’m feeling at the moment. It’s either that or I’m looking through material to add to my music library.

I would love to work with Kerry Washington and Reese Witherspoon! Both of those women are so inspirational and I know working on one of their sets would be an unforgettable experience.

Leonardo Dicaprio’s performances always take my breath away. He’s an actor I really look up to.

Where do you see yourself 5 years from now?

I see myself on a beach in Spain or Greece, writing a movie to star in or writing a new album.

Truthfully, I suck at social media. I rarely ever post on Twitter and I try to post at least once every 2 weeks on Instagram. I try to post on my Instagram story more often to make up for my lack of content, but I get really busy sometimes and it’s burdensome to make social media a priority. I think there are more crucial things in life like experiencing things with your eyes instead of cellphone screens. I get really sad when I see the youth so addicted to these devices.

@victoriakonefal is my handle on all platforms.

Quote: Never let them change you.

Holiday Destination: Anywhere in the world. I’ve always loved to travel. Appreciating delightful places and experiencing new cultures are my favorite things. Greece, Spain, Italy, Morocco, Japan, and Thailand are at the top of my list!

Celebrity Crush: I recently saw Halsey perform live and I can’t get over how beautiful she is. I’m in a Halsey trance for now.

Movie: The last movie I watched was “3 Billboards Outside Ebbing Missouri, and it’s an outstanding film. I highly recommend watching it if you haven’t already.

Team: I’m a fan of the Patriots! I’m from New York, so it feels strange to be rooting for a team from New England but those boys know how to play football.

Interview with artist Leah Kate and her new single “Do What...