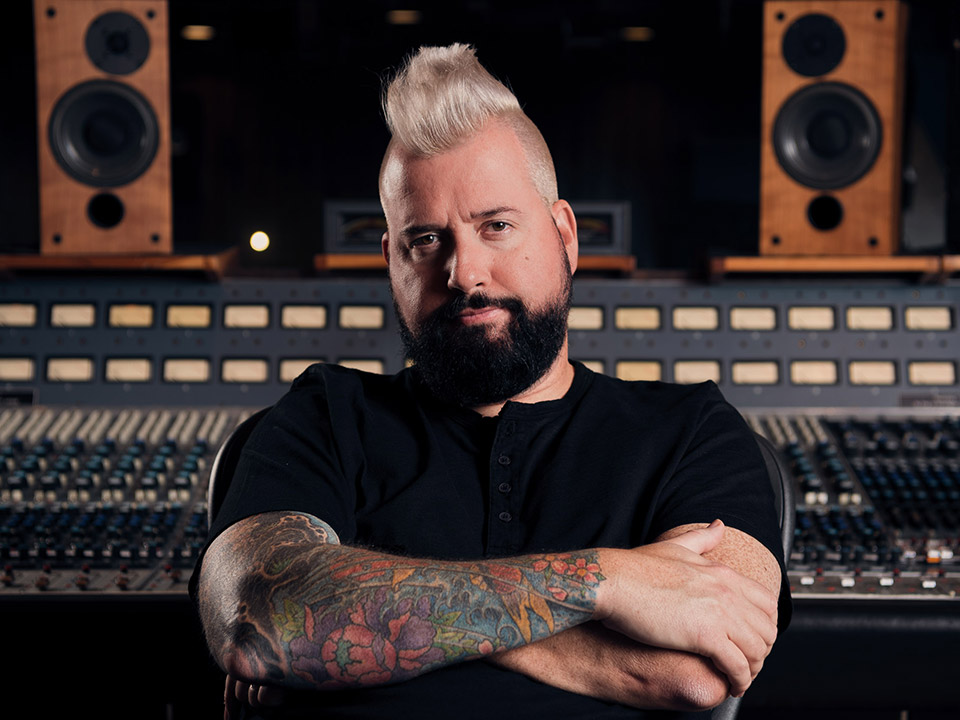 Check out our interview with Grammy-award winning producer and iconic DJ in the EDM music space, Dave Audé who just released his DEBUT album “Motions” after his incredible 20+ year career!

Having collaborated with massive music legends from Coldplay, Lady Gaga, Leann Rimes, Janet Jackson, Madonna and many more, Audé has spent the past 2 decades putting artists first and making their tracks hits on the dance floor. With an unprecedented 135 #1 Billboard Dance hits, the time has finally come for the producer to release his debut album Motions. The 12-track album features breakout artists and some more recognizable vocalists from LeAnn Rimes, country artist Cody Belew, and LGBTQ+ breakout artist Zee Machine and many more all making up a body of work of epic songs that Audé has written and produced, but never released, or new creations he couldn’t wait any longer to reveal.

He partnered up with LeAnn Rimes for their first ever cover track Alanis Morissette’s “Uninvited”, one they worked on together start-to-finish. His song “I’m Ready” was originally written by Audé and pop artist Meghan Trainor back in 2014, but it was never cut or released.

I’ve been making music since I was 13. I love sushi, the Dallas Cowboys, Kobe Bryant, and I have a wife and 3 kids and a Boxer Dog named Mylo.

Sure thing. Ya, when I was in my early 20s, I started going out to nightclubs and underground dance clubs that featured house music in the LA area. Around that time, I met someone at a nightclub that was starting a label and needed a producer/keyboard player. I became the in-house producer for that record label, Moonshine Music, and was very lucky to start my career in the music business at an early age. I learned everything in those first 10 years. It was a chance meeting in the middle of a packed club in downtown LA that started it all.

Not really. If anything, I get anxious!

Anyone who knows me knows I don’t really chill out. I do go to Hawaii every 5 years (I just returned today), and I didn’t pick up my phone for a week, so actually I do try and chill out every 5 years lol!

Tell us about your new album “Motions?”

This album is the first project I’ve ever done for myself. I’ve made a career out of producing songs for other people, so I finally decided it was time to put my own body of work together with the help of some friends and colleagues. It’s been a bit stressful but also very exciting for me. I wish I had done this ages ago. I’m already thinking about the next one. 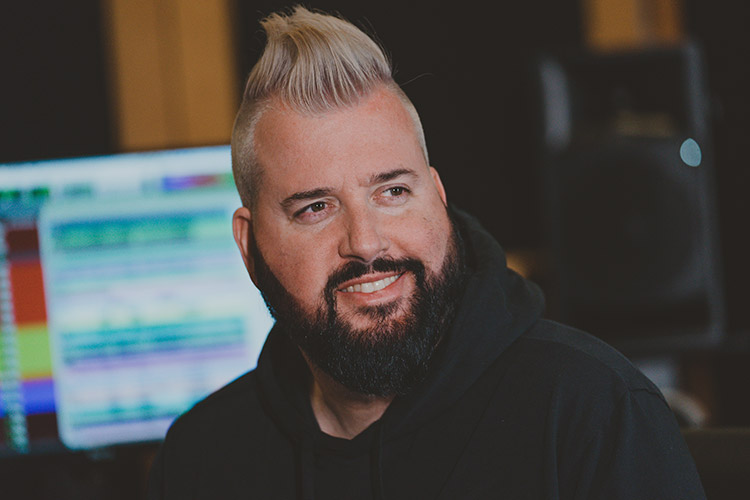 What’s the story behind the tracks?

1. “Uninvited” LeAnn Rimes – see above but as I mentioned I have worked with LeAnn for many years remixing her songs and I think she is one the most incredibly talented artist’s I have ever met. When I heard LeAnn sing a piano version of this song, I immediately knew we had to take it to the dance floor and put on.
2. “Motions” Zee Machine – my friend Darrell Brown connected me with the phenom known as Zee Machine, and I immediately was floored by Zee’s natural ability to write the best hooks around accompanied by some of the best lyrics I’ve had on any one of my songs! Zee Machine is exactly that.
3. “This Is Our Time” Nick Clow – Nick is a long-time friend of mine from the UK. Nick has co-written many of the 15 Artist #1 songs I’ve had on the Billboard Dance Chart and is also an amazing vocalist. This song is a fan favorite this year for sure.
4. “Neon Moon” Cody Belew – a new friend and what a vibe when he sings. You must see him perform to understand the full spectrum of his talent. Oh, and the self-designed outfits! I’m super excited to continue making records with Cody.
5. “God Save The Queens” Luciana, Tom Stephan – Luciana is without a doubt my favorite person on planet earth to make music with. Luciana has a trademarked style and sound that has represented the Electro House sound for over a decade. She is the Queen of Electro House and couldn’t love her more. Tom Stephan is a dance music legend who helped spark this record’s sound.
6. “I Can’t Be Without You)” Nick Wayne – this Nashville native singer-songwriter has his own unique sound and I’m thrilled to include him on this LP. We co-wrote this with one of my favorite songwriters of all time, Christian Stalnecker.
7. “Break Out” Jeffrey James – another friend I’ve met in Nashville, Jeffrey, and I are writing so many great songs (look out for RetroGrade on his new LP), and wow, this guy’s voice is so smooth. We co-wrote this song with the amazing Jennifer Hansen and this “dream team” has more coming.
8. “Don’t We Both Look Dumb” Halston Dare – a Houston singer-songwriter whom I’ve had the pleasure of working with on her new EP which I am BEYOND excited to get out to the world, she is the next pop megastar and the CEO of the color Purple.
9. “I’m Ready” Kinsley – Another new young artist that I’m thrilled to be working with and wow she can sing! She smashed this song I co-wrote with Meghan Trainor, and we are working on new music as well that will blow you away.
10. “Somebody Like You” Andreas Moss – I’ve been working with Sir Andreas for years. This Swedish-born songwriting wunderkind writes hits in his sleep. He can also sing the phone book in one take. We have written some epic songs for other artists, so it’s pretty damn awesome that we finally have something together.
11. “Shiny-er Things” – This is a new take on an earlier released song called “Shiny Things” that I co-write with my friend Fann. Fann is on sabbatical, but I keep asking her to write more because she is so crazy talented. Thanks Fann!
12. “This Is Our Time” (DJ Strobe Remix Dave’s Edit) – DJ Strobe, another long-time friend is (in my opinion) one of the most underrated producers/remixers of all time. Strobe also has an amazing knowledge of all things related to the history of dance music. I am very lucky that he SMASHED the remix on this one.
13. “Neon Moon” (Dave Aude Club Edit) – I’ve been known to remix my own records, so I pumped up the BPM and made something that I can play in the middle of my club sets at residencies in Roscoe’s in Chicago and TEN in Atlanta.
14. “Backwards” Alexander Stewart (Dave Aude Remix) – Alexander Stewart from Toronto is an independent singer-songwriter that I connected with who has had massive YouTube success. We wrote 70+ songs and “Backwards” was the cream of the crop. Alexander continues to release new music and I think this remix is one of my best!

How was working with LeAnn Rimes for their first ever cover track Alanis Morissette’s “Uninvited?”

LeAnn has been a long-time friend and collaborator and someone I consider to be the most naturally talented vocalist I’ve worked with (also an amazing songwriter). When I heard LeAnn sing a piano version of this song, I immediately knew we had to take it to the dance floor.

What’s your advice for the newer DJ’s / Producers?

Listen to as much music as possible. Be versed in some styles of music you might not actually play. It’s good to at least know about the music that’s getting requested.

I’ll be DJ’ing on TV for New Years Eve to 20 Million homes, LIVE from the Palms Hotel in Las Vegas, head to head with Ryan Seacrest!

What advice would you give to aspiring Producers?

Music is a tough business, so you must decide if you are in it for the long haul or not because there are highs and lows, as with most things in life. Most important is to be thankful and appreciative of the people around you, whether it’s your employees, co-writers, label execs, or anyone that supports your talent and gifts. It’s easy to forget about saying “thank you”, and I’m the first one to tell you I don’t say it enough. In the end, if music is your path, you will find a place in the business of music.

As a popular DJ and Producer you are followed by so many people. How do you feel about that pressure of always doing the right thing, and encourage people to follow their dreams?

I think dreams are always changing as the world changes, but if you love DJ’ing and love music and do it for the right reasons, you will without a doubt find a way to be in music and support your family…. Never Give Up!

Don’t give all of that vinyl away, you might wanna do some all vinyl sets one day!!! I’m sort of serious but also sort of joking. I love all of the old vinyl, but it does sound crappy, and is a pain to carry around…..

I don’t read any more, only staring at computers for hours on end making music 🙂

Whitney Houston. She was amazing and I never got a chance to work with her.

Learn how to finish one song, then move on to the next.

Being able to quickly identify the best parts of a song.

A cowboys win, and composing a hit record in an hour so I can spend the rest of the day with my kids.

If she doesn’t know who J Geils Band is.

Doing the same thing but better?

Jeans and a t-shirt with Air Force One’s.

I need another body so I can spend more time on Social Media as I’m a control freak and like to do everything myself!

Quote: Are they built for speed or for comfort? What’d you do with them? Motorboat? You motor-boating son of a bitch! You old sailor, you!