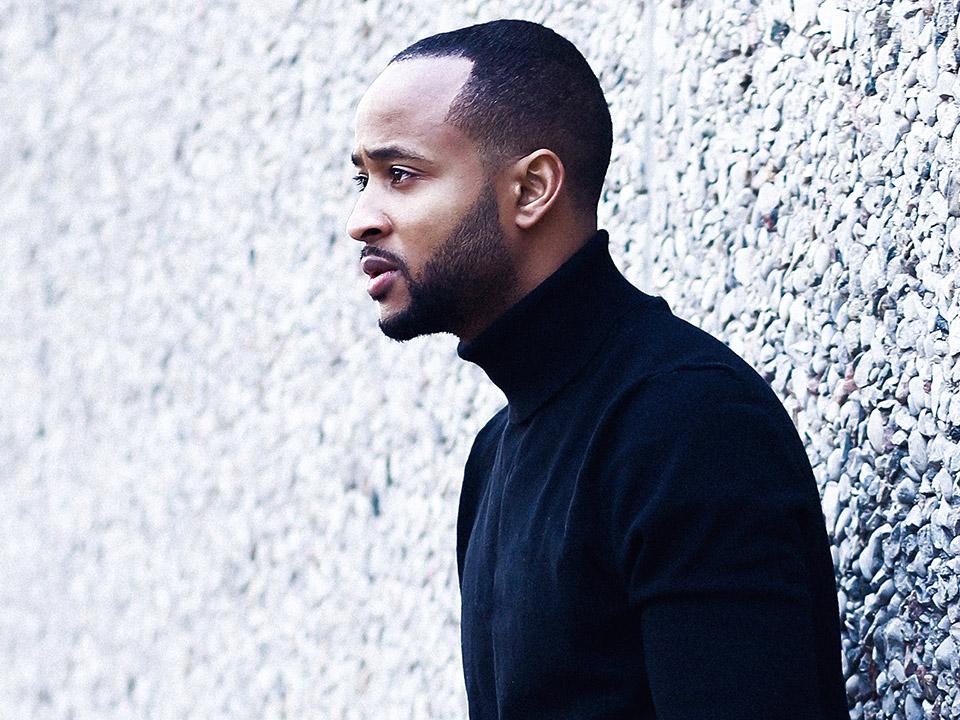 Crossword Mysteries centers around newspaper crossword editor Tess Harper played by Lacey Chabert after she discovers that her weekly clues have ties to local crimes. Tess works closely with NYPD detective Logan O’Connor who helps Tess solve the murder cases. Romaine plays Detective Winston Sams who is Logan’s new partner. After serving as a patrol officer for four years, Detective Sams is more than ready to take on the job.

Hi Romaine, please tell us a little about you?

I was born in Montego Bay Jamaica, and raised in Canada. I’m a simple guy, just trying to experience all the good that life has to offer. I enjoy motorcycles, travelling and one day I hope to open a small restaurant.

I never had one specific role model. It was more like a group of people, and I don’t think I have enough space here to list them all. What I will say, is that they’ve all influenced different aspects of my life.

It was a small indie film. At the time, a close friend of mine had an uncle who was into writing plays. One year he decided to make a film. He put out a casting call, that made its way to my inbox. During this time I wasn’t actively pursuing a career. I had taken drama in high school and done a few plays, but acting as a career had never crossed my mind. I went for the audition simply because a film was something new for me. Little did I know this would be the catalyst for my journey.

To be honest I’m not sure, It’s hard to pinpoint what my life would be like if acting wasn’t my main focus. However, It has changed my perspective on a few things. Sometimes having goals and ambition can bring on unnecessary stress, because you’re always striving for the ideal. What I’ve learned is that it’s okay to strive for the ideal, but measure from where you started. In that way, you’re always acknowledging your growth and having gratitude for the things you’ve accomplished. From this positive place, you can continue working towards your ideal.

I play a rookie detective (Winston Sams), who is eager to prove himself to his partner Logan O’Connor. In the script, my character is really sharp. He’s focused on finding inconsistent elements in each case, and making them available to his partner for further investigation. I was given the freedom to bring Winston to life in my own way. Which involved understanding all the unique tactics forensic investigators use to solve crimes. I’m excited to see where this character goes. The series is grounded and somewhat gritty, different from what you might expect from Hallmark. So far it has been a fun experience playing this character. Also having the opportunity to watch Brennan Elliott and Lacey Chabert work has been motivating.

What other projects are you a part of?

A series called Frankie Drake Mysteries, which is now in its third season. The show follows Toronto’s only female private detective in the 1920s as she takes on the cases the police don’t want or can’t handle. I play a character named Bill Peters. Season 1 and 2 can be seen on CBC Gem and Ovation TV.

The opportunity to travel and meet creative and talented people.

Good question, I’m really not sure.

In early 2020, I will be in a LIFETIME channel biopic. It’s about the prominent American gospel group The Clark Sisters. I’ll be playing the husband of one of the sisters. In case people aren’t aware, I’ll give you a small idea of who they are. They have a catalogue of hits, they’ve won multiple Grammys, and worked with numerous artists across varied genres. Including artists like Missy Elliot and Snoop Dogg. Mostly recently, you can hear them sampled on the Jay-Z hit ‘Family Feud’. The film is executive produced by Queen Latifah, Mary J Blige, and Missy Elliot. Directed by the lovely Cristine Swanson.

Having full control over your time. Meaning, you’re where you want to be, doing exactly what you want, with the people you want to be doing it with. Everything else is gravy.

Pretty chill. When I’m working things can be kinda hectic, so I try to enjoy my downtime as much as possible.

Waking up well rested, to the smell of a traditional Jamaican breakfast. Then enjoying time with family outdoors.

Not necessarily a person, but the start of my bloodline. I think that would be really informative.

It’s a fruit you can find in most tropical climates. In my home country of Jamaica, we call it Soursop. It has green skin with a whitish jelly inside. You can eat it as is, but sometimes I like to make juice out of it.

Cinnabon. Yes, the American chain of baked cinnamon goodness. I love baked goods in general, but Cinnabon has my heart. Just thinking about it, I want to go buy one or two — don’t judge me.

Once you reach a certain level, everyone is skilled and qualified. After that, it’s about forging strong bonds and inspiring those around you.

No specific charities at the moment. However, I often volunteer for events at my church that support the community. I’ve also travelled to Africa for volunteer work.

Name 3 things you can’t live without

In addition to acting, writing and directing; developing some sort of talent incubator for youth interested in the film industry.

If I had to choose one, it would be Erykah Badu – Didn’t Cha Know. It presents the journey of life in a simple way, and the importance of following your heart. Even if you make a ‘wrong’ choice it’s okay, it will work out in the end.

My musical taste is really a mixed bag. It depends on what mood I’m in. In a day, I can go from listening to reggae and afro beats, to gospel and movie scores.

It’s such a powerful tool when used in moderation and with intention. Most people have a tendency (I catch myself doing it sometimes) to scroll mindlessly, I think that’s when it becomes a concern. Believe it or not, everything we see/hear is registered in our subconscious and can have a positive or adverse affect on our behaviour and emotions. On the other hand, humans will forever communicate using images and words, social media is just a heightened version. I would still encourage people to get out and live life away from the screen, as much as possible.

Quote: It is better to attempt something great and fail, than attempt to do nothing and succeed.

Book: The Women of Brewster Place