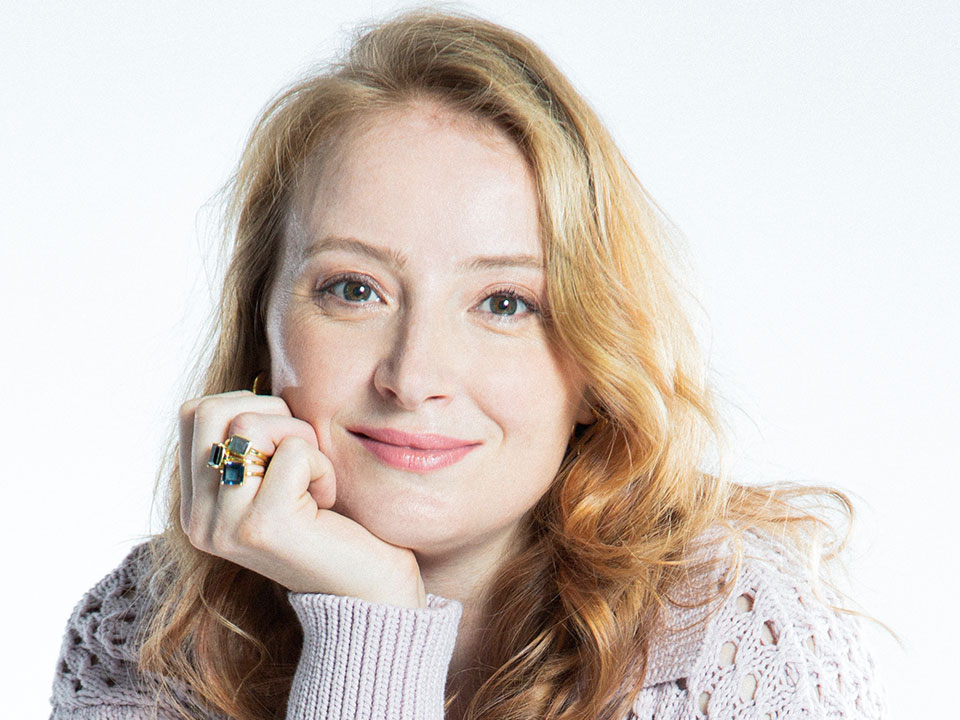 Check out our interview with director, writer, producer and actress Kersti Bryan who can be see on the action-packed spin-off series AMC’s “Tales of the Walking Dead.”

On another note, Kersti just released her short film EGG PARTY today, tackling the incredibly tough topic of pregnancy and infertility. Now more than ever, Kersti is using this short film as a safe space for women of all walks of life to relate and discuss the incredibly difficult topic.

Starring Sophie von Haselberg (Bette Midler’s daughter), Susan Heyward, Holly Chou, Ashton Heyl, Christine Renee Miller, and Claire Kennedy, EGG PARTY shares the story of six women in their late-thirties gathering together for a not-so-sober afternoon to laugh and dye Easter eggs. Through a series of whimsical portraits, we discover each woman’s view on her own “egg:” lost dreams and new beginnings. As the afternoon shifts around them, it is revealed they have gathered to support their friend Molly (Sophie von Haselberg), who is desperate for motherhood and struggling through loss and infertility. When Molly’s world is cracked open, coming together becomes the greatest gift to heal a grieving spirit. 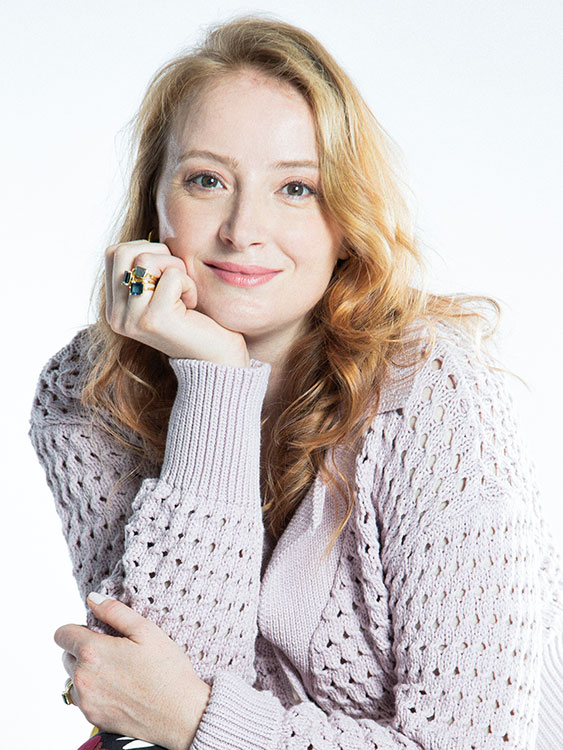 Hi Kersti, please tell us a little about you?

My name rhymes with “thirsty”. I work as an actress, producer and director based in NYC. During the pandemic, alongside some friends, I started a non-profit called The Clear Day Project to bring message of hope to frontline workers. I was born and raised in Golden, Colorado to a couple of docs: my father is a rock doctor (a PhD in geo-statistics) and my mom is a retired physician. My parents inspired my love of ecology and nature. I’m one of four children. Middle child drama: my mother once saw me in a play and didn’t recognize me. I was the one in the HAT, mom! A little-known fact: I was trained on the orchestra harp since age seven.

In high school, I was cast as the Apothecary in a 3.5-hour un-cut production of Romeo & Juliet. I had broken my arm snowboarding the weekend before (pretty common for a Colorado kid) and I had a glow-in-the-dark cast on my arm. The Apothecary didn’t come on until hour 3 so I don’t think the audience was awake at that point for my performance, but I loved every second of it.

As an actor, I have worked alongside some of the bravest avant-garde theatre artists in basements in NYC to some fancy movie stars in Hollywood. I have worked across the stages of United States and at the Moscow Art Theatre in Moscow, Russia. I have traveled to Cuba, Israel. It has been a great adventure and brought me the gift of great friends and teachers.

Tell us about the experience on working on the insanely popular short film ‘EGG PARTY?”

Egg Party is a short whimsical tale about infertility. This was my directorial debut and stepping behind the camera was so satisfying. We were on the brink of the pandemic in NYC when we were filming, so that added to the excitement (and stress) of making this little egg of a film. Egg Party has gone on to have a wonderful festival run and won numerous Audience Awards and the Panavision First Time Filmmaker Award. It is streaming publicly online now for everyone to view — I hope you check it out!

How was the casting for this project?

Because I primarily work as an actress, I know some of the most talented actors in the land. So, we cast all our friends: Sophie von Haselberg, Susan Heyward, Christine Renee Miller, Holly Chou, Ashton Heyl and Claire Kennedy. These women are powerhouses and it’s an honor that they believed in us and were willing to be part of our little film!

And about your work on other series including “Tales of the Walking Dead,” “Hustlers,” as and “Ray Donovan”.

Starring in Tales of the Walking Dead was a dream. I played alongside the amazing Terry Crews and Olivia Munn and got to play a role that was so dynamic. She ranged from sweet to unhinged. That was the most fun. Hustlers was just an honor to be part of. I loved being part of such a female driven story, directed by the great Lorene Scafaria and then watch them win big at the box office. I played Ray Donovan’s dying mother, Anne Donovan in the series and in the Ray Donovan movie. Much of Ray’s issues surround how sick his mother was when he was a child so that was heavy duty stuff. 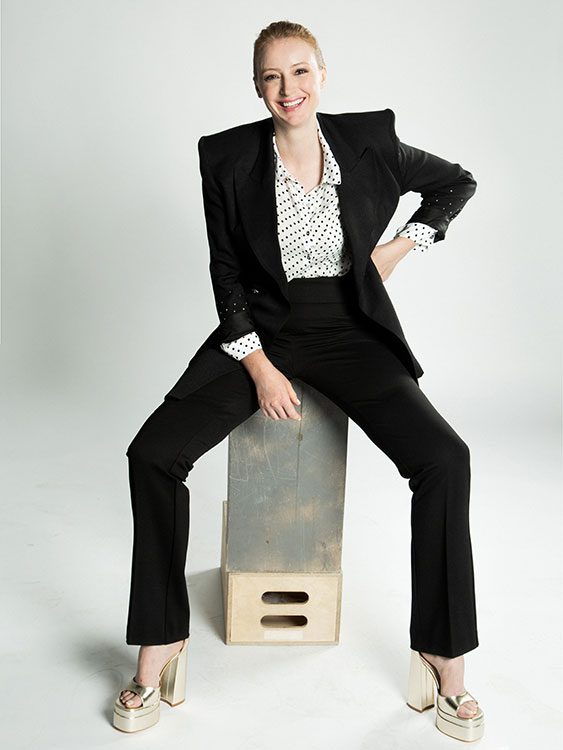 How different is to work on a movie, series? And if you have a different preparation for each.

I work on such varied roles, I like to spend some time in research making sure I know the world of the piece. I try to understand the tone and rhythm of the script so I can help serve the story well. There is often not a lot of time, so I research the work of the director, writers, producers, and the other artists involved so we have some shared language when we get to set together. And then when work begins — I try to listen and play!

I want to play a Scottish queen in a long dress that is always riding a horse through fields of heather. Wouldn’t that be great?? But mostly I strive to play fully dimensional surprising women that make people look twice and say: oh, there’s more than meets the eye there.

I love process and rehearsal. Experimenting and workshopping ideas with great collaborators. The audience is so smart — they will always tell you what fails and what works.

It takes 100 auditions to get one. So just keep at it. Get your numbers up!

I asked a couple of my best pals and they mentioned “most kind”. I paid them to say that. One also mentioned: always down for an adventure, especially when it goes sideways. And the other: a brilliant passionate revolutionary wrapped up into a whimsical container. Thanks, y’all. **TEARS**

What’s next for Kersti Bryan in the last months of 2022?

I have a lovely recur on HBO’s Perry Mason coming out in the winter and two great upcoming feature films: Rachel Hendrix directed by Victor Nunez (Ulee’s Gold, Ruby in Paradise) and Inheritance directed by Neil Burger (Limitless, The Illusionist).

Stepping off a set or stage and having been so present during the performance, I can’t remember a thing.

The Oracle of Delphi. What was her deal, yo??

When I was terrified to try my hand at acting, my father reminded me of the Law of Inertia: An object at rest, will stay at rest. To get moving again, that object must gather all this energy. An object in motion can quickly change directions. So just make any choice that keeps you moving. You can always change course. If you stop, it will take you an immense amount of energy to start again.

I am a major supporter of my sister Reyna’s non-profit, The Clock Tower Project that helps people understand the urgency of climate change. Planned Parenthood, Amnesty International, and Literacy Partners, a great non-profit in NYC that focuses on adult literacy.

You can count on me being front and center on the dance floor when Journey’s “Don’t Stop Believin’ comes on.

I should get a flip phone and leave it all behind so I can have my creative brain back. Also, can you imagine going through the hellscape middle school with SOCIAL MEDIA? Omg.

But, because I have no flip phone, yet come hang out with me here: Instagram / Twitter: @kerstidanger

Book: Last night I read the children’s book Pokko and the Drum by Matthew Forsythe to my nephew Orion. Delightful!

Quote: All will be revealed.

Movie: A Woman Under the Influence directed by John Cassavetes— Gena Rowland’s performance can’t be missed. I also love Triplets of Belleville directed by Sylvain Chomet. I could listen to that soundtrack forever.