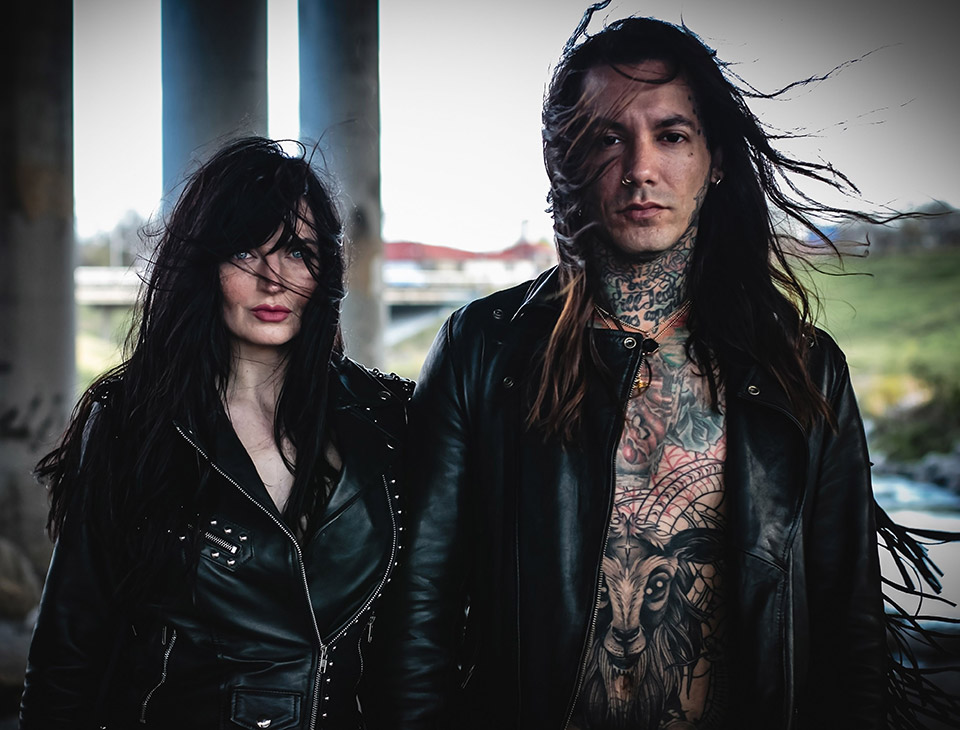 Check out our interview with beauticians, entrepreneurs, and wrestling power couple Luis and Kristen Chevere.

Based out of Austin, Texas, Luis and Kristen are international hair stylist pros, and now are recognized as a multifaceted wrestling duo! In the Wrestling Universe, Luis goes by his stage name “Alexander Crowley” (known as a dark/evil cult leader aka “The Death Dealer”) and Kristen as “Lilith Crowley”. Together they are known as “Cult of Crowley” and as a team they have created their own wrestling characters in their entirety, making their own costumes and investing in their own entrance song. 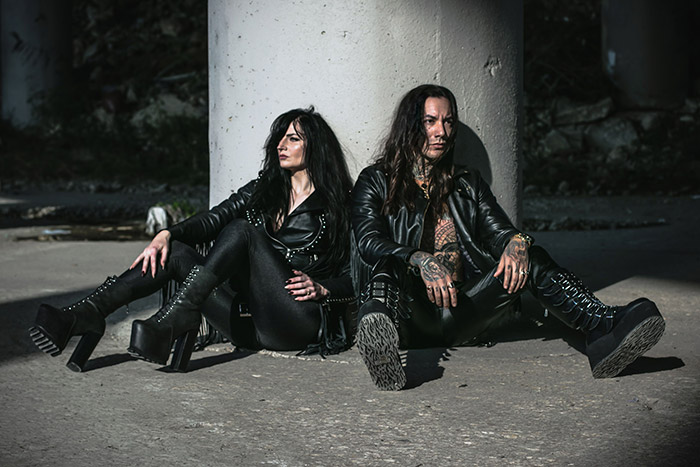 Where did you guys meet?

K: I found him through Instagram. When Luis use to travel and teach hair, he did a class at a friend’s barbershop in Dallas. I thought he was a new barber, but it turned out he was just there temporarily. I reached out to him about coming down to San Antonio to do a class then one thing led to another and 6 years later, here we are.

Tell us about your Wrestling career and why the stage name Cult of Crowley?

L: I’ve been in the wrestling industry for 2 years now. The name Alexander Crowley, came from Aleister Crowley, a man from the 1990s who started magic cults and other occult things. There’s a lot about him that would be best not written since it could be considered a bit graphic, I suppose. Anyway, it’s a culmination of him, David Koresh, who was a cult leader in Texas and also a fictional character from Supernatural, Crowley, a crossroads demon. Lilith is the mother of demons, based on biblical scripture and witch lore.

When and why did you guys decide to do this?

L: I originally began back when I was 19, but a few things got in the way, one of them being 19. After moving to Texas, I began to research some wrestling schools and after some trial and error, I found Hybrid School of Wrestling, which was suggested by some of their talent I met at a show in Austin. A few weeks later, I began training and about 7 months after Kristen also began training. We both grew up watching wrestling and have always loved it, we’ve been lucky enough to accomplish a lot of goals in the hair industry and decided we should give this a try. It’s been an incredible journey thus far and it is far from over.

Are you guys not afraid of any major injury while doing wrestling?

L: Injury is always something on your mind when you’re in the ring, but if you trust whoever is standing across from you, injury can be very unlikely. It’s important to do things you’re comfortable doing to avoid injury. I’ve had minor injuries so far, chipped molar and a bruised shoulder.

What form of cardio or fitness training do you guys do during the week?

L: Kristen trains 3 days a week as well as takes acting classes once a week, she always works out in the gym as often as she’s able to. I, myself, currently train 4 days a week at our training facility as well as in the gym. One of those 4 days, we do “cardio day”, which is done in the ring and helps with body control, breathing and also knowing where you are in the ring.

Do you guys have a special diet to follow?

L: I wouldn’t say special diet, but we do follow a fairly strict diet of clean eating. Of course, we’re human, so we do have our “cheat day” on date nights.

Tell us about your salon company Now Salon?

K: Myself and my family have owned NOW Salon for 11 years. We are located in San Antonio, Texas. We have four stylists and one esthetician. We are considered a boutique salon, but we pack a punch when it comes to services provided.

What is different from Now Salon to others in the market?

K: Our concept was to bring art into the salon environment, leaving each client with the feeling of being a masterpiece when we are finished with them.

What has been your biggest accomplishment so far?

K: Our biggest accomplishments as a team would be Luis being nominated for 6 haircutting awards and I have been nominated for a colour award with Behind The Chair. We have also been selected multiple years as the best salon in and around San Antonio.

K: We have a few upcoming projects we are working on, but we will reveal those when the time is right!

What’s next for Now Salon?

K: Our next move with Now Salon is to expand, with more stylists and renovations.

L: The Subtle art of not giving a f*@#. It’s helped us a lot when it comes to focusing on you and ignoring the noise around you.

What is the feeling of having a very successful company in a very competitive market?

K: It’s an overwhelming feeling of accomplishment. But also, it gives you even more motivation to see where you can take it, to make it to the next level.

What are the challenges you face in the market?

K: Honestly our biggest challenge these days is social media “Lying” aka photoshop. Explaining to clients that a color isn’t real or easy to accomplish is the hardest part of the job at the moment.

What comes to mind when you think of the next products, locations, services?

K: Expansion! I’m always thinking of the bigger picture. So, when you ask me about those I think about a larger location or adding a second. Adding service providers that would expand our services and products.

K: The biggest reward for me is bringing out someone’s inner confidence. Helping them see the beauty I see in that mirror. Sometimes just being an ear for someone to listen to helps them more than you know. But that’s also a downside, we take in a lot of people’s emotions and that along with standing on your feet for hours a day tend to wear on your body more than you’d expect.

L: I personally love the connections I’ve made with clients; some have turned into friends and some I’ve seen grow from young teens to adults. It’s extremely rewarding. As for the downside, Kristen covered it, being on your feet for 8+ hours really takes a toll on your body, sometimes not having time to eat because you’ve got a full book of clients to take care of. I make a point nowadays to at least have a protein shake.

L: Honestly, I don’t know, that’s a great question. Maybe “Brutal honesty and why it’s important”, I don’t like to beat around the bush, I try to be really honest. I can’t fake emotions; my face and mannerisms give me away.

K: “You’re a badass and no one needs to tell you”. It would be a motivational book on encouraging self-love.

L: Never gives up, I would say. I’m very determined, if I want something I push as hard as I can to achieve it. If it’s something I don’t know how to do, I’ll learn how to do it if I really want it!

K: Honest yet positive friend you could ask for. I try to encourage people to be and do their best.

What is the key to your success?

L/K: Determination. It’s pushing yourself past your comfort zone, it’s learning new skills you never thought you could learn. It’s pushing for your dreams and not giving up no matter what obstacles are in your way.

L: This is a funny question, we used to be really into fashion. We would always dress up and take pictures. With such a rigorous schedule we keep now, it’s hard to focus on fashion as much as we used to. We do still love it and we believe fashion is an expression of your inner self.

L: Mine is more grungy, cut off band shirts and ripped up jeans with whatever black sneakers I can find or a pair of Docs.

K: Mine is more of a hodgepodge, I love bits of 70s and gothic with a bit of boho.

L: For us, as long as we’re doing things together. We enjoy spending time with our friends and families as well.

What is next for Luis and Kristen Chevere in 2021?

L: Currently, we’re putting a lot of focus on our wrestling careers. One of our big goals is to do something that is televised, but in all honesty, we just want to travel and have fun with our new career focus.

L: I like tomato soup but hate tomato juice.
K: I have an irrational fear of Junebug’s.

L: The undertaker was a big one I would say.
K: John Ritter.

L: Robin Williams, he was a huge part of my childhood movies. He was just an amazing actor and seemed like he would be someone you could sit down with and have a good chat with.

K: Kevin Hart because I would like to learn how he juggled everything in his life while building such a large brand.

L/K: Anything with animals we always donate to, but none specifically.

L/K: Wrestling, which is rather obvious, but we also love Modern Family and New Girl.

L/K: Sleeping in, brunch with friends, maybe some shopping and ending it with a nice glass of wine.

L/K: We believe social media is a great tool, if used correctly. It’s important to know if you’re going to use it for business, it becomes a job. Use it wisely and remember that it’s not just about the likes, it’s about the support you give to others who support you!