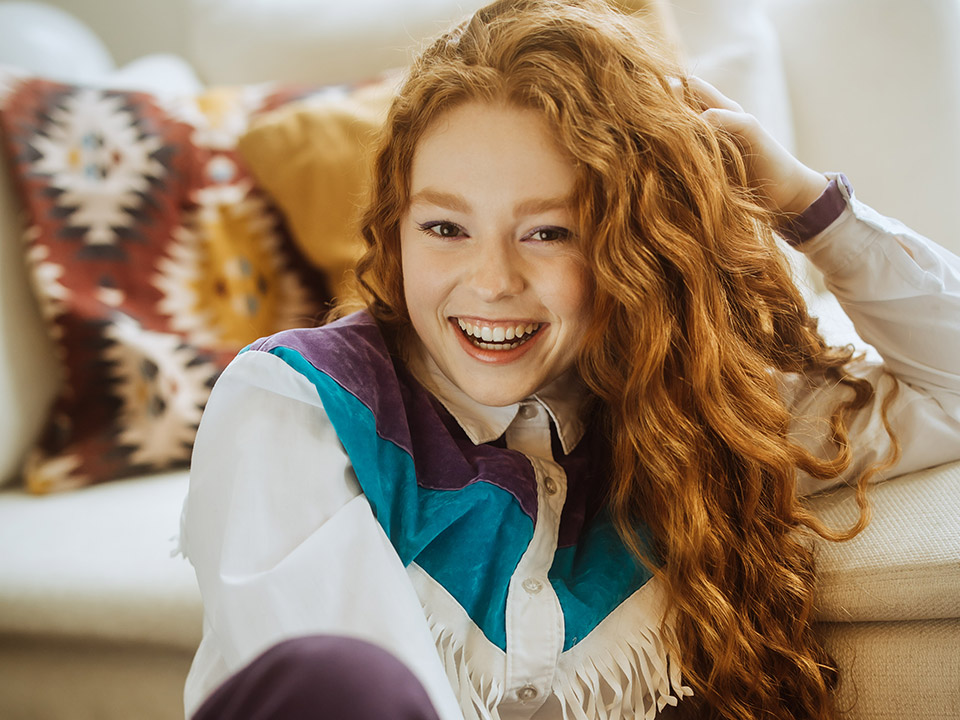 Check out our interview with talented actress Kyra Leroux who can be seen on season 2 of Netflix’s “Firefly Lane”, playing Lisa-Karen, Tully’s new adversary in her friendship with Kate. The Netflix drama based on Kristin Hannah’s novel follows two women over 30 years of friendship and falling outs. With its time-hopping structure, episodes bounce between the eras as we watch the two friends evolve throughout the decades.

Kyra is best known for playing fan-favorite Britta Beach in seasons 5, 6 and the current 7th season of The CW’s hugely popular series “Riverdale”. 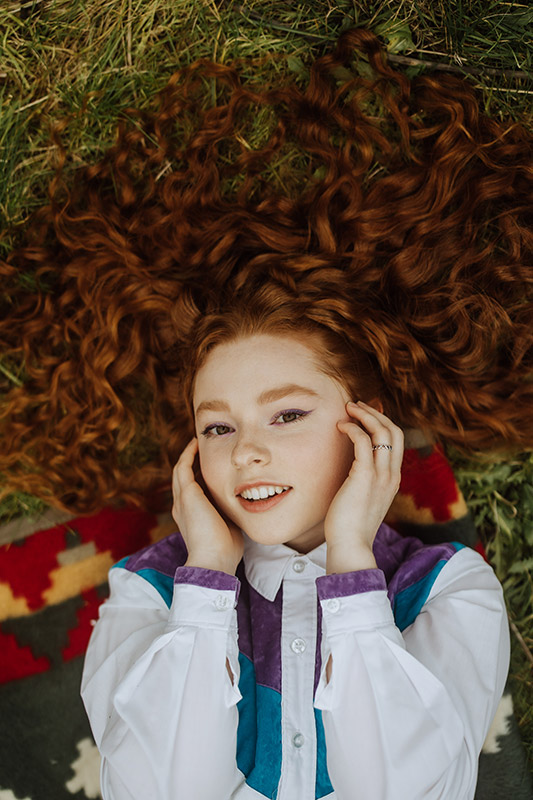 Hi Kyra, please tell us a little about you?

My mom put me in musical theatre when I was 4 because I wouldn’t stop talking!

Acting has taught me so much about myself and continues to teach me more and more about myself, other people, and the world every day.

The best part is human connection, the worst part is the crazy hours on set. But even those are fun sometimes!

It totally depends on the character! Some characters need more deep dive internal work, and some need more research and information. No matter what, I always read/watch the source material!

Tell us about your work on the 2nd season of Netflix’s “Firefly Lane?”

I had so much fun working on Firefly Lane! I play Lisa-Karen, a super annoying, bossy, competitive president of the AV club who considers herself Kate’s new best friend, and becomes jealous and resentful when Tully shows up to reclaim the title for herself. 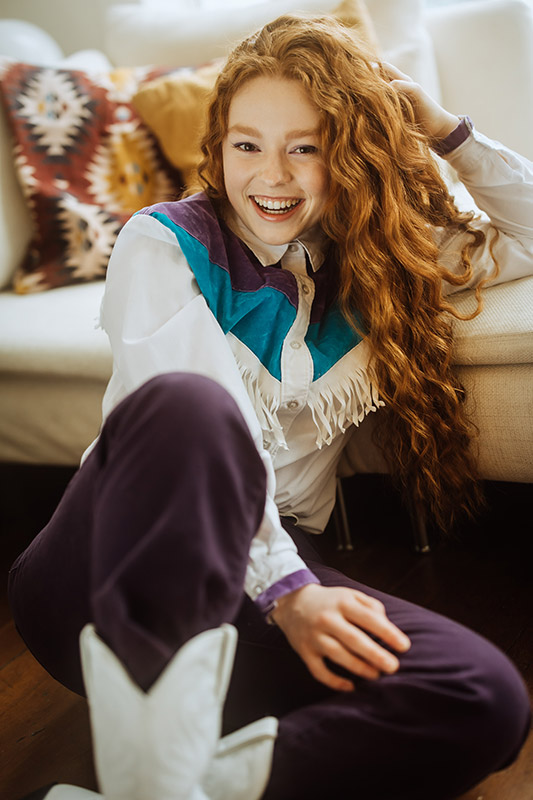 And about your work on CW’s hugely popular series “Riverdale” and your fan-favorite role as Britta Beach?

I love playing Britta! From running down the football field muddy and cold at 3am, to being possessed, to singing and dancing and working in the mines, to traveling into the dreamscape, to reciting incantations with Cheryl, the writers of Riverdale always have something up their sleeve! It’s a really exciting show to be a part of. With all the twists and turns, even I don’t know where Britta will end up!

I recently starred alongside JoJo Siwa in the Paramount+ movie “The J Team” which was just nominated for two children and family Emmy awards!

I love the roles where as an actor, you get to come into the scene and stir the pot!! My character on Firefly Lane, Lisa-Karen is a perfect example of that. Other than that, roles where I can sing and dance as well as act are the best! 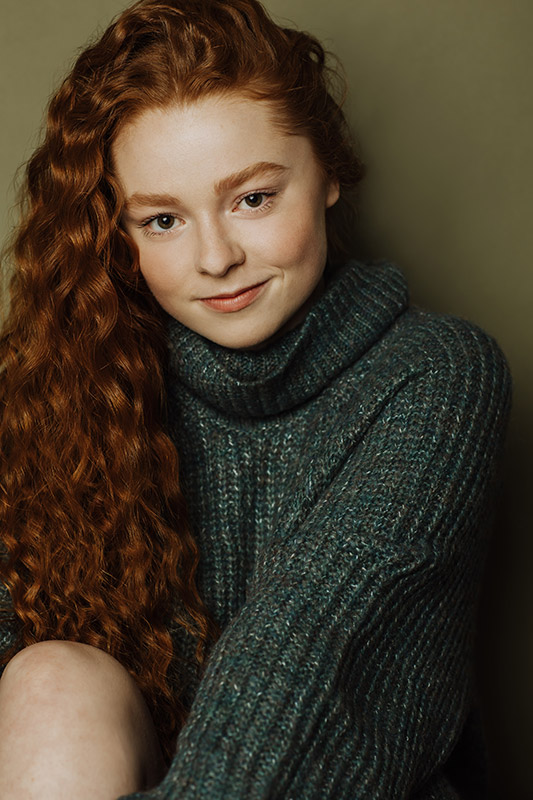 The work itself! I love it so much. Everything after that is bonus 🙂

– Be yourself and things will come to you!!
– Trust your gut

Ok so I texted my best friend and asked her expecting to get a sarcastic answer but she said “fierce, confident, hard-working, and silly!”

I think just “Kyra” because I wouldn’t be satisfied with any other title.

Just be you. Because that’s all you can do! Pretty much everything else is out of your control.

Firefly Lane Season 2 part 2 is on Netflix in June of 2023! And look out for season 7 of Riverdale airing sometime next year as well!!

You can never go wrong with an Apple and a Baby Bell cheese.

Accepting and loving all of me.

Reiner Maria Rilke because I love his poetry and I think a conversation with him would be life changing.

I want to do it all! I would love to play an anti-hero, and I will be on Broadway one day. Maybe I’ll even direct! Who knows where life will take me, all I know is wherever it is, it’ll be totally awesome and totally unexpected!

It totally depends on what mood I’m in, if I want to feel nostalgic, or have a dance party in my bedroom, feeling groovy or need a boost of confidence! I recently learned Ceilings by Lizzy Mcalpine on guitar and I’ve been having a lot of fun singing it. My current top two dance party songs are Nights Over Egypt by the Jones Girls and Cuff It by Beyonce. Also if you’re not listening to Affirmation Song by Snoop Dogg you’re missing out.

Have fun with it, and don’t take it too seriously! It’s not three dimensional, so don’t expect it to be. (That doubles as advice to myself haha)

Favorite Food: I will never say no to a classic New York slice

Sports Team: The Pittsburgh Penguins (thanks to my brother for that one)