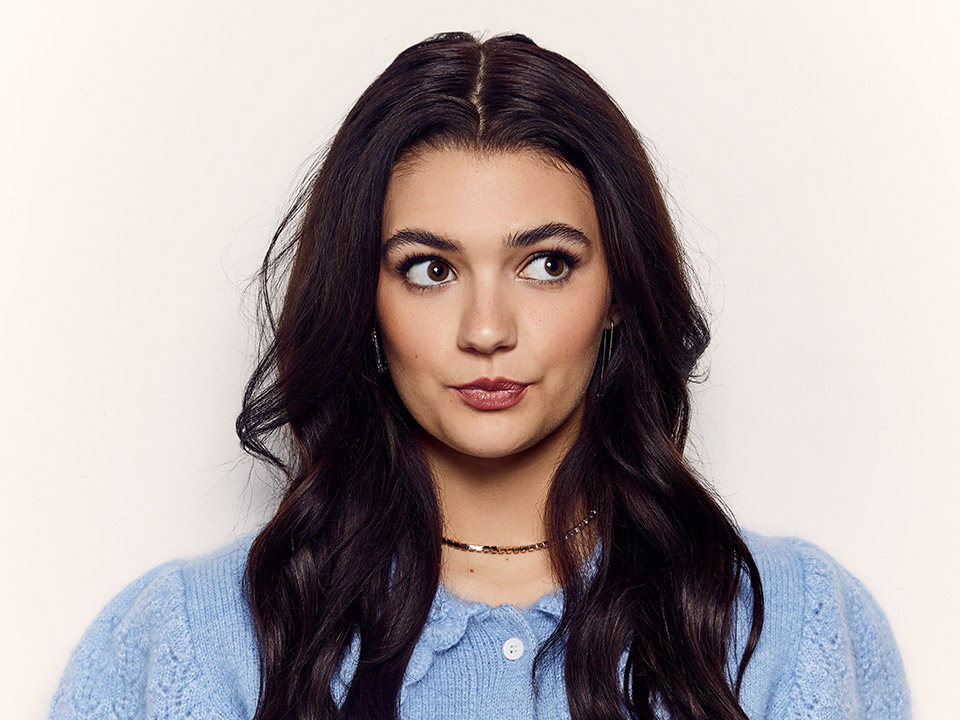 Check out our interview with rising star actress Eva Carlton who can be seen in the brand-new Nickelodeon / Paramount+ live action series “The Really Loud House” as the standout role of ‘Leni Loud,’ an upbeat fashionista. Not always the smartest one of the bunch, ‘Leni’ can be relied on for her bright and sunny outlook on life. The live action series is an adaptation of the fan-favorite animated series “The Loud House.”

Eva grew up in Atlanta, Georgia and loved performing. She enrolled in theater summer camps and participated in school plays and musicals, whenever possible. The talented singer and actor got her professional start as a lead role in the Dreamworks animated series ‘Where’s Waldo” and followed up with a supporting role in the Universal feature film “Little” with Marsai Martin and Regina Hall.

Outside of acting, Eva’s passions are founded in fashion. She is always dressed up for every occasion, and recently began to experiment with designing her own clothes in an eco-friendly way, using upcycling materials. With the wild rise in fast fashion, Eva focuses on sustainability within the industry. 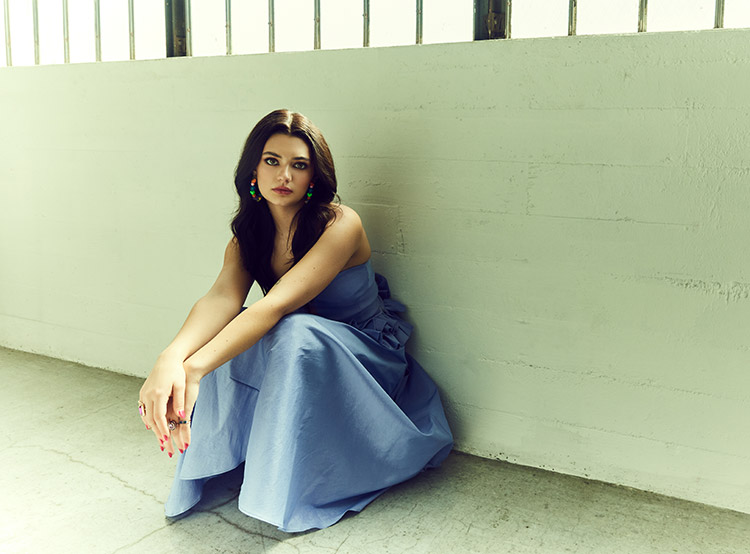 Like many kids, I participated in theatre camps growing up! I loved to sing, so this was a natural progression for me. However, I didn’t really take acting too seriously until my first regional theatre audition for El Zorro. I sang One Direction’s “What Makes You Beautiful” just to show you how new I was to this industry. I got a call back, and the director called my mom to tell her that while I was too young for the part, I was very talented and should stick with acting! A little while later, when I was watching TV, I turned to my dad and said “I want to be on TV one day,” and so my fate was sealed! I’ve been acting ever since!

Prior to booking this I was a very normal teenager; the other projects I’d worked on still allowed me to go to school and have a normal social life. Before booking this, I had just graduated high school and had plans to go to college this fall. Now, college is on the backburner as I’m filming this year! I’m sure as the series gets released my life will change a whole lot more, but only time will tell!

The best part is getting to do what you’re passionate about! Portraying unique characters with important stories is an absolute plus! The worst part I would say is the instability of this industry – we never know when we’ll book again. Also, being an actor means getting comfortable with rejection, which isn’t fun.

I go through the character breakdown and then read the script. I try to look for anywhere in the material that I can add my own spin on the character. Then, I memorize the lines wholly so that the lines are coming from my subconscious, and I can really focus on my choices and on connecting to the character. I always practice saying each of the lines in at least three different ways too, to find out which feels the most natural. 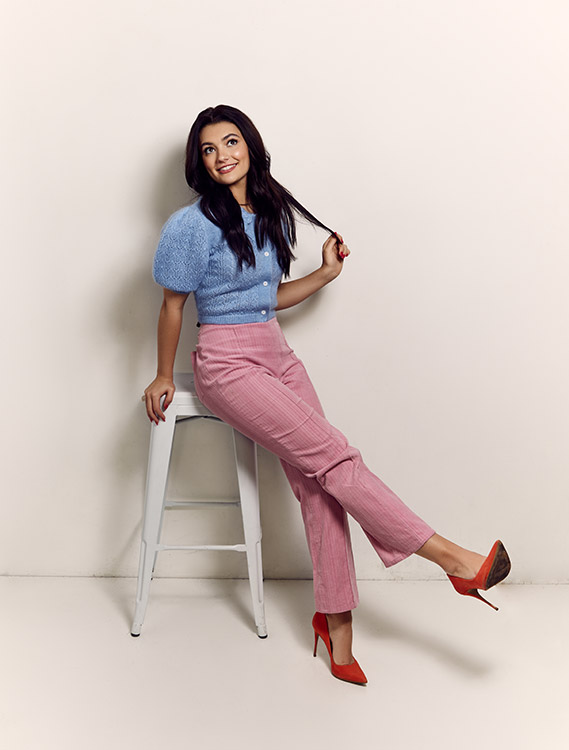 Tell us about your work in the brand-new Nickelodeon / Paramount+ live action series “The Really Loud House?”

I play Leni Loud, one of ten sisters to the protagonist, Lincoln Loud. Because there are so many characters, each sister is very well defined. The episodes are filled with humor suitable to all ages that revolve around these very different personalities! Leni has been an especially fun role to play – all of her lines are hilarious and our showrunner, Tim Hobert, often adds little jokes throughout the scene for me to say!

And about your character “Leni Loud?”

Leni is a bubbly fashionista who is, at times, a bit ditzy. Naive and having a genuine love for the world, Leni is the best of us. She is always kind and will do anything for her family – even when they kinda make fun of her (though she doesn’t realize). Fashion is her language – she loves clothes, and it’s how she expresses herself!

I played Odlulu in Dreamworks’ Where’s Waldo and Jasmine/Caren in Universal’s Little.

I would love to play a really round character, as basic as that sounds. Often, female roles in Hollywood can be reduced to quite flat characters. A woman in film is either good or bad based on a few choices we as the audience get to see; it’s rare to see a woman be more than a villain or a heroine, even in real life. So, I would love to play a complicated, multi-faceted woman who isn’t necessarily good or evil, just like the rest of us in real life.

At the moment, I have to say just getting the call that I booked has been so rewarding. 99% of acting is auditioning, so learning that you’ve successfully landed a part is huge! 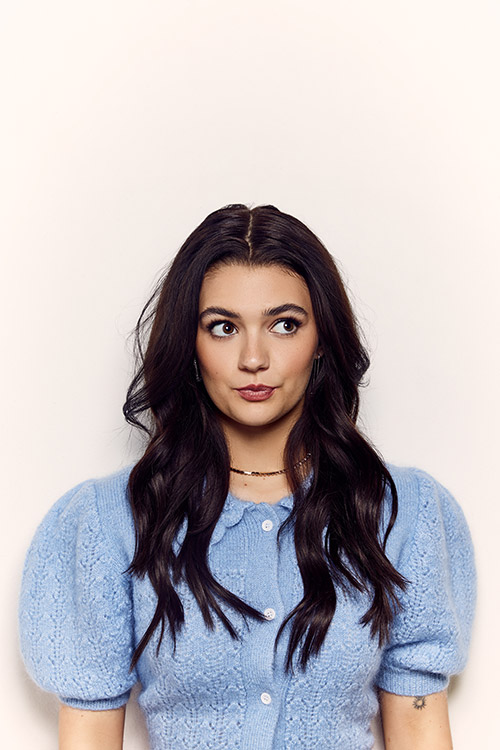 There’s a lot of rejection that most people cannot handle, so you need thick skin. And if you truly, really love the craft, don’t give up.

I’ve learned to work hard, do the best you can, and then let go. Lots of actors can go crazy from the lack of feedback to their acting as well as faltering self-confidence. If you work your hardest, you know you did your best, and the rest is up to fate.

I actually texted my group-chat this question and they responded with: intentional, intelligent, introspective, ambitious, competitive, kind, spunky, talented, creative, passionate, and caring.

Eva the Diva – I’m not actually a diva, but it helps people know how to pronounce my name, and it’s been my nickname since I was two!

I would tell young me to find myself and stay true to it. When I was younger, like lots of kids, I had a serious issue with wanting to be liked. Because of this, I would mirror the personalities of those around me, and I kind of lost myself in the mix. It would have been incredible to believe back then that the only person’s opinion that mattered was my own.

I think my dad would say How to Win Friends and Influence People. He gave me that book years ago, and I still have yet to read it, but it’s on the to do list.

I’m filming The Really Loud House through the end of 2022, and I might be filming something early 2023, but I’m not sure yet.

I love eating just raw baby kale – that sounds kind of bland, but I could eat it forever.

I don’t really consider any food “cheat” food… I think sometimes that verbiage can instill guilt around eating which is unhealthy and dangerous, particularly for young women and girls.

I define happiness in my own life as peace. In the past, I confused drama with fun and therefore happiness. Now, however, I notice that the lack of stressors in my life has made it peaceful, and I feel happy.

Honestly, maybe Taylor Swift. Her career is so inspiring, and I would love her advice on maintaining relevancy and longevity in the public eye. I also am a huge fan of her music, and would love to take some kind of songwriting class from her.

My dad always says to work backwards from your goal – he’s very big on affirming that I have control over my own life and its outcome… If I want something, I need to create a plan and go get it.

I see myself being the lead in a hit TV show that I helped to write! I have true passion for writing, and creating a screenplay and acting in it are at the intersection of many of my interests. I also hope I’m releasing music then!

Well my all-time favorite song is “Problem” by Ariana Grande because I swore it would always be my favorite when I was eight, so I gotta stick to my guns. As for the moment, I think it’s “Ceilings” by Lizzy McAlpine. She expresses such a familiar experience so beautifully in that song, and every time I hear it, I want to scream the words at the top of my lungs.

I do think social media can be harmful to impressionable minds just in that it’s so addictive and isn’t great for body image. However, social media has really helped democratize many industries (like fashion and especially music). It also makes information and current events easily accessible, which is great. All of this to say I have a love-hate relationship with social media.

Quote: “I would beg to disagree but begging disagrees with me” – Fiona Apple

Travel Destination: Jerusalem. This is my dream travel destination, but I haven’t been, yet.