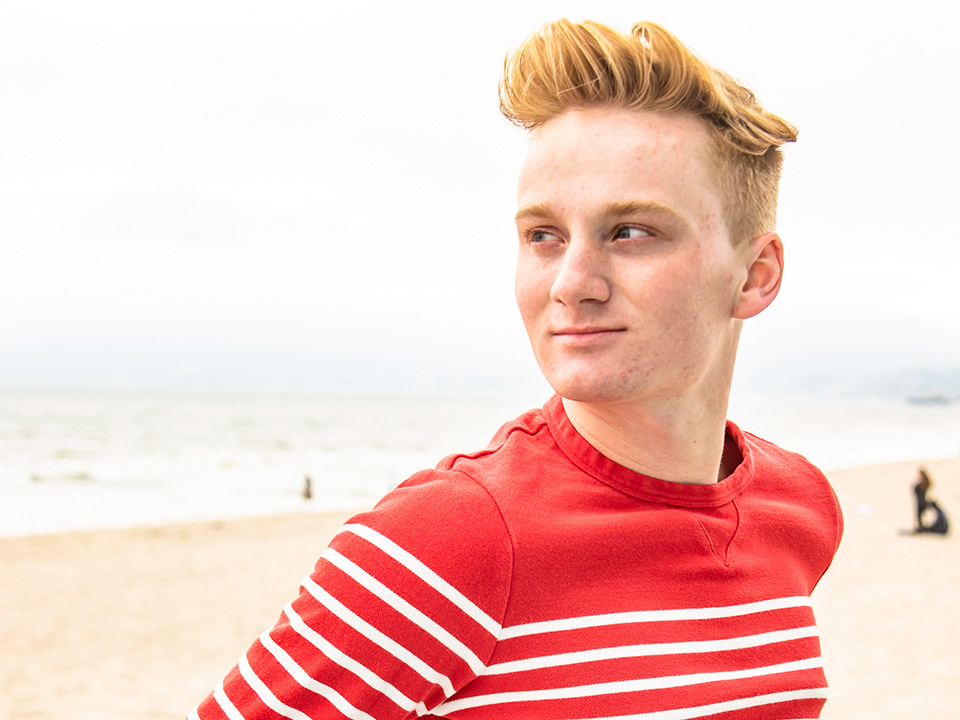 Check our interview with talented Ethan Paisley who is a force to be reckoned with. He is a filmmaker driven by social change with over twenty film and TV projects under his belt that are being distributed internationally. Paisley is currently hosting and executive producing a six-part episodic project for DVD Netflix (a Netflix company) titled “Set Life” and hopes to inspire young artists into their passions with the release of the show. This new endeavor will add “host” to Paisley’s extensive resume of talents, which include writing, directing, producing, and acting. Even though he is busy making headlines with his on-camera work, Paisley is even busier breaking down barriers with his recent film and TV projects.

Last year, he was the inaugural recipient of the Best Young Director Award for his film “Indelible” at the Young Entertainer Awards, an awards show that included nominees Peyton List and Anthony Gonzales. He recently produced two short films now in post-production titled “Tell Me When To Forget” and “Go with the Flow”, and will begin shooting his third feature film “Turn Out” later this year along with a Manhattan-based TV Series titled “Screwed”.

Hi Ethan, please tell us a little about you?

Hi there! I’m Ethan Paisley, and I’m a filmmaker, writer, and public speaker based in Los Angeles… can’t get more original than that. Something that makes me different is I like to eat my cereal without milk. Let’s start this interview!

I think my greatest asset is my ability to network and build teams for creative projects. It’s like what Anna Wintour does for the Met Gala, only people are bringing a little something more than themselves to the table. And I’m slightly nicer than Anna, but only slightly ;).

I usually wake up at 8:30am, reset my alarm 2-3 times until it’s actually 9:30am, and then I get out of bed and run about 3-5 miles. When I get back I staredown my Nespresso machine that I’ve never learned to use, and splurge my daily $5 on a venti Starbucks iced coffee. After that I usually head to class for a couple hours, work on homework till about 5pm, grab dinner, and then work on creative projects for the rest of the evening. I treat school like a 9-5 job on the days I have it and everything in between is making movie magic happen.

My mom and my dad equal each other out when it comes to being my biggest supporter. They’ve dedicated unparalleled amounts of time towards helping my brother and I achieve our dreams. There’s no amount of money that could repay them for everything they do.

I wanted nothing more than to be an actor when I was 5 or 6. I begged my mom to enroll me in community theatre, which led to doing independent films and commercials. When I hit pre-teenhood I started auditioning against those weird 18-year-olds that look 12 and never getting cast, so I decided to make my own content. My first film was a feature “The Art of Escape” that won distribution at the Singapore International Film Festival and gave me the platform to start my production company Take18 Entertainment in 2014. After that, I kept making movies and never looked back.

What is the best and worst part of being a filmmaker/speaker?

The best part of what I do as a filmmaker is take part in the magical process of taking an idea from script to screen. Every aspect of the film industry is an illusion, and it’s a very cathartic feeling to be able to actualize a vision from your head onto a movie theater screen for audiences to enjoy. As a speaker, I love inspiring others to realize strengths they never knew they possessed and motivating them to change the world in a positive way. Both are incredibly vulnerable activities that involve showing the world who you truly are, but it’s so rewarding despite being daunting at first.

The best piece of advice I ever received came from a film producer, Hilary Shor, who said: your success in the industry is not a measure of your talent, but of your emotional resilience. By hearing that when I was just starting to make movies as a teenager, a whole layer of pressure was alleviated and I started to view the film business as a business. That feeling sticks with me today: it’s not a talent show, it’s an industry selling a product with a formula, and your job is to fit the formula, but with your own authentic approach. And your approach is what will ultimately make or break you as a filmmaker.

Tell us about your work on “Set Life?”

“Set Life” is a six part docu-series I host that explores the six steps of filmmaking in the digital age, and it will be released mid-June (there will be a release date soon!) on the DVD Netflix YouTube Platform. Each episode focuses on a different aspect of the process, ie Episode 1 is about development, Episode 2 is about pre-production, and so on. You get to see behind-the-scenes on some of my projects but the real focus is on the other independent filmmakers we feature and interview through the show. I tell people it’s like “Reading Rainbow” meets a “Vice” documentary, where the audience and I are both learning more about the filmmaking craft together through other people’s stories and experiences. I wanted to do “Set Life” because it’s a show I wish I had to learn from and get inspired by when I first started movie-making.

Tell us about your work on “Indelible,” and what was the feeling to be the inaugural recipient of the Best Young Director Award for this?

In 2017, I wrote, directed, and produced “Indelible” which I always say was the least personal to my life experiences, yet the most personal emotional expression I’ve shown in my art. It’s a film about a PTSD-affected veteran who time travels back to the war front to cope with his trauma. The idea comes from Sebastian Junger’s novel “Tribe” which carries the idea that life at war is more peaceful for veterans than living in America’s rat-race society, so to speak. My film deals with themes of isolation amongst this culture, which I relate to in my own life. Not only did making the film allow me to express my feelings on the state of our culture, but it also educated me on a huge problem that affects our veterans when they attempt to assimilate back into American society. It’s an honor to be recognized for a project that taught me so much about myself and our country. It will be distributed by Shorts TV later this year in Europe, and next year in the states.

And about your two new projects “Tell Me When To Forget” and “Go with the Flow?”

As a student at Chapman University’s Dodge College, I’m always running into exquisitely talented filmmakers with great scripts that need a producer. Two of those scripts happened to be “Tell Me When To Forget” and “Go with the Flow” in my first year as a freshman. “Tell Me When To Forget” is a Black Mirror-esque psychological thriller about a woman who works to regain memories of her son, and “Go with the Flow” is a comedy about a girl who learns to love her struggling actress mother the same day as her first period. Both films are vastly different and special in their own ways. I recently wrapped post on both projects and they will be starting the festival circuit later this year!

I’ve been a part of three features and over twenty shorts and commercials as a producer. Up next I will be line producing for a TV Project I can’t say anything about that starts shooting in July, and right after that I begin prep on a feature “Turn Out” that I’m shooting this October. I’m developing two pilots and another feature script in the background. Right now I’m trying to shift my attention to the episodic space as well as continue telling stories with a greater social purpose from all different genre backgrounds.

Besides what I mentioned, I’m developing a new mini-series with my colleagues at PaperChase Films and will be launching my own PR Consulting firm sometime over summer that specializes in promoting brands, talent, and creative projects. There will be more news on the PR project as we get closer to launch.

Right now I love Issa Rae, because she’s not only is she a great actress, but a writer, director, and fully-rounded individual in control of her own content. I would love to write something for myself to act in later down the line, I miss it.

My music taste changes everyday. One minute I could be listening to rap music by Cuban Doll and another it could be folksy pop music like Léon or Aurora. Honestly anything I can silent disco to.

Being productive on a script in my favorite coffee shop all day while wearing sweatpants and fuzzy socks. And if it’s raining outside that’s even more perfect.

I collect vintage or used haute-couture. Not sure if it’s an addiction or a hobby at this point. I sorta have a shopping problem.

Being one of many forces on a project I have immense passion for, and knowing it’s going to be impactful in some way.

I’d like to befriend Putin and go sledding together. Maybe it would change his mind on things.

I love shows like Big Little Lies, Insecure, and Girls. But I prefer watching movies.

Yes, I’m a huge anti-trafficking advocate and encourage everyone to check out the following charities: Polaris, Love146, SF Coalition Against Human Trafficking, and the Varity foundation. #EndHumanTrafficking