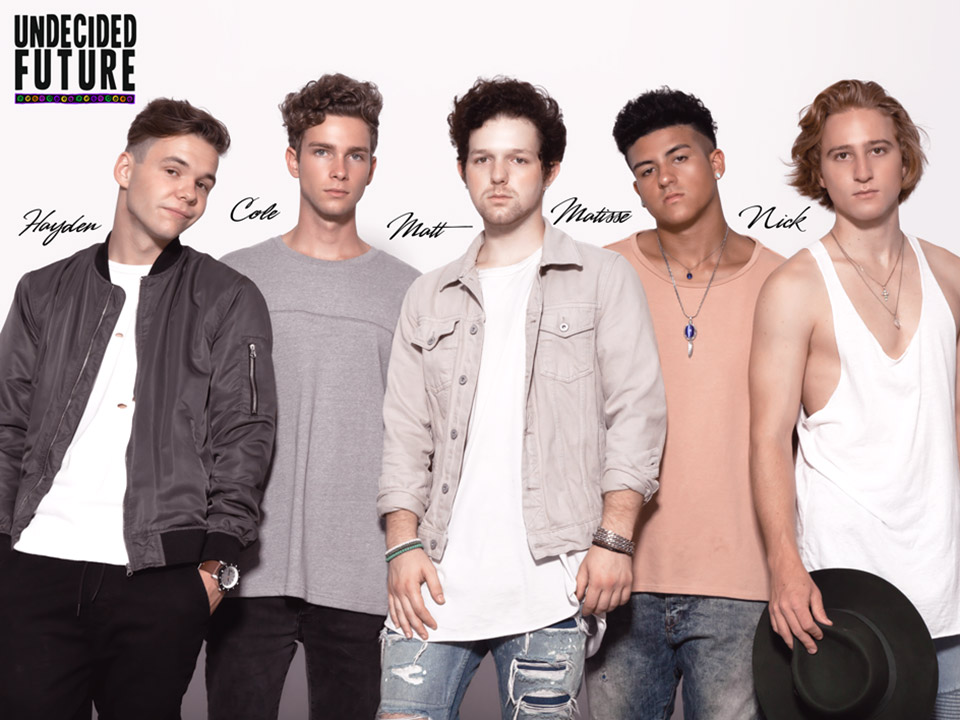 Their sound is diverse and has many intricate layers. Undecided Future takes influences from Pop, Funk, Reggae and even Rap and R&B and make it into a groove that many people will connect with. With Matt, Cole, Nick, Matisse and Hayden strong and diverse in their own musical crafts and styles, their songwriting compositions are dynamic, unique and fresh on the worldwide music scene.

“The name Undecided Future is our connection to the billions of people like us whose futures are undecided. We want to deliver to our fans an exciting, Pop/Funk style of music that makes you want to dance. Our concerts are high-energy with funky drums, hard hitting Bass, crazy rock, rhythm, funk guitar licks, new age synth chords and great piano lines. Our vocal harmonies are unique and create the Undecided Future sound.” Matt (Lead Vocals), Cole (Guitar), Hayden (Bass), Matisse (Drums), and Nick (Keys) make up the Undecided Future band.

They are the 2017 Winners of Best.Cover.Ever. with Jason Derulo “Orange County’s Up-and-Coming Band to Watch” reported by CBSLA 2014 and again in 2016!

Hey guys, please tell us a little about you?

We are a funk/r&b band. We love to have parties during our show and jam out to dance grooves and laid back rhythms. We write, produce, and record all our music, which include originals, and innovative covers. We also create our visuals such as music videos, graphic designs and stage show.

Define yourself in 1 word?

How did you guys met and decided to form the band?

We met at OCSA, Matisse met Matt in the film conservatory and they decided to start a band with Matt as the guitar player. Matisse met Nick in health class, they decided to jam together one day. Hayden was Matt’s first friend at OCSA and Matisse jammed with Hayden leading to having him join the band. Matt and Matisse saw Cole playing guitar near the lunch area, without knowing if he was good or not, an impulse decision lead to them asking Cole to join the band.

Where the name “Undecided Future” comes from?

We had our first show at the Aquarium of The Pacific, and the day before we didn’t have a name and it just came to us randomly. We found meaning in the name as time went by.

How was your experience in “Best.Cover.Ever” and about winning with Jason Derulo’s? Did he gave you guys any tips or recommendations?

Overall very positive experience working with Jason Derulo on Best cover ever, it felt like we got a sneak peak of how they film and record such high quality content. Jason definitely gave us a lot of confidence pointers and stage direction

Yes we are planning the 2018 intoxicated tour

Just be yourself and find your own sound

The type that got a beat and moves your feet

Had a bad day

Chilling on the beach

Bob Marley, because he was a big promoter of peace and finding happiness through gratitude and music

Phone, my trap phone and my business phone

Jimi Hendrix and Steve Irwin, that guy’s a legend

Kale smoothie in the teeth

Do you guys support any charity?

At the moment no, but we want to raise money for charities dedicated to cancer patients, as well as animal rescue services.

Song: Do I Do by Stevie Wonder

Book: Horton Hears a Who