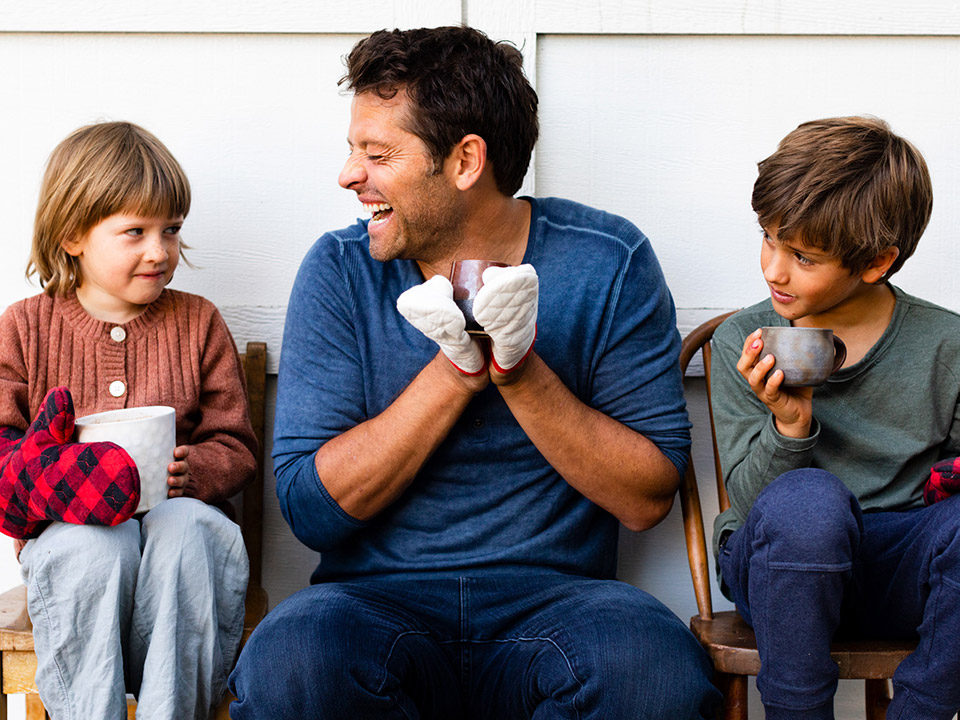 Misha stars as ‘Castiel’ on the hit CW series “Supernatural.” The show has had a phenomenal run with the final season (season 15). Having first appeared in season 4, ‘Castiel’ is an angel from heaven. With his story arc dramatically shifting and evolving, ‘Castiel’ found a permanent home alongside brothers ‘Sam’ (Jared Padalecki) and ‘Dean’ (Jensen Ackles). The series is the longest running American sci-fi television show in history.

Alongside being a successful actor on a cult favorite series, Misha co-write The Adventurous Eaters Club with his wife Vicki Collins. The cookbook shares their story of how they created a home where mealtime doesn’t involve coercion, trickery, or tears. The goal of this cookbook is to bring joy, curiosity and connection into family meals. 100% of author profits from all book sales will be donated to non-profits. 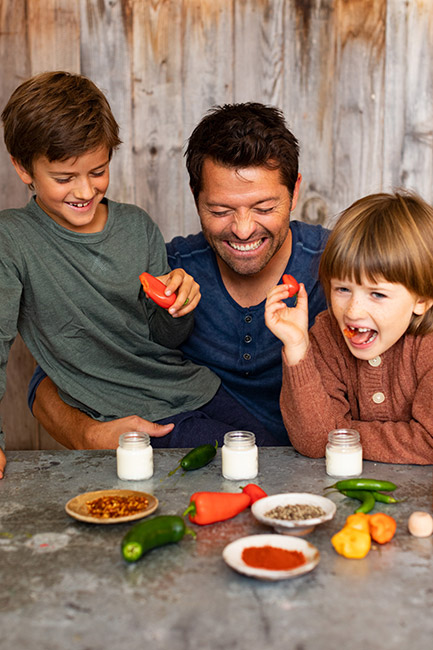 Hi Misha, please tell us a little about you?

I imagine this is what signing up for a dating service is like. I like romantic walks on the beach by candlelight and making things that no one has ever made before. I hate it when people lick the tips of their fingers when they’re eating.

I was pretty poor growing up and my dad wasn’t around much. But Mr. Hagis, an elderly man in our neighborhood, stepped in and became a father figure to me and my brother. He used to teach us woodworking and about airplanes and radio. He really invested in us as people, which left a lasting impression on me.

I initially had political aspirations, but I decided that I wanted to do something with more integrity. So I got a headshot and resume and started auditioning. Right out of the gate, landed a feature film role, so I thought, “This is easy!” and we moved to LA. I don’t want to brag, but it only took me about a decade to land another major role.

Tell us about your work in CW series “Supernatural,” and your role as Castiel?

I play Castiel, a fallen angel who is obsessed with old police procedurals on TV so he cosplays “Columbo” all the time. (The trench coat has a better contract than I do.) He’s trying to do his best to watch over his found family, the Winchesters, but he’s awkward and a bit of an outcast. He doesn’t really feel like he has a home or a place with anyone right now, so that’s a little bit lonely. I’m sorry… I mixed this up with his therapist’s appointment.

Right now, I’m pretty excited about the new family cookbook I have coming out with my wife, Vicki— it’s called The Adventurous Eaters Club and it’s all about helping “picky eaters” become curious, courageous food adventurers. When our kids were little, like most parents we found ourselves arguing with our young, picky eaters and falling into patterns of convenience just to get them fed. But we discovered if we turned our kitchen into a playground, it changed everything for our family. So this book is part cookbook, part field guide to happy, healthy family meals. It’s our attempt to use our experiences to help other parents and teach families to love healthy eating. So that’s pretty insidious… especially as 100% of author profits from the book go to charity, with a focus on organizations that help underserved kids gain access to healthy food.

I find it incredibly gratifying when we set a goal that feels impossible and then we find a way to make it happen… especially if it pushes back against expectations or shatters societal norms.

Now tell us about co-writing The Adventurous Eaters Club with your wife Vicki Collins?

Writing The Adventurous Eaters Club was a great couples-bonding experience. I highly recommend co-authoring a book to every couple as a way to really come together while arguing over phrasing. My wife, Vicki, is a journalist, historian, and Ph.D. with two books under her belt already, so I learned a lot working with her. 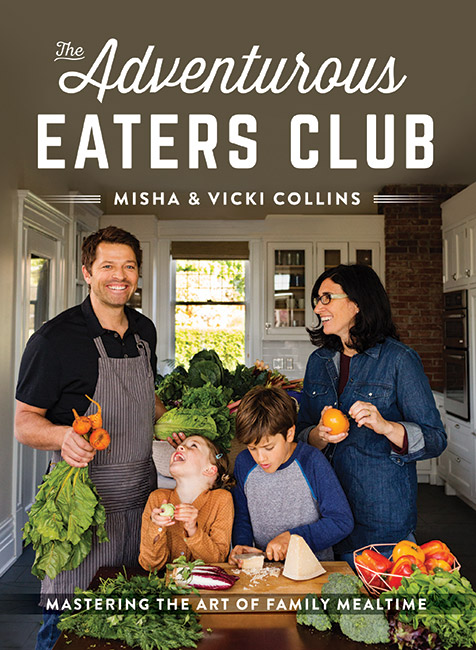 Where did you guys got the idea to start writing your own cookbook?

We got the inspiration for writing The Adventurous Eaters Club from our own struggles trying to feed our kids. We didn’t want to set them up for a lifetime of unhealthy eating, and quickly realized that it’s a systemic, cultural problem in America. This book is our attempt to consolidate what we’ve learned so others can learn from our mistakes. It’s a cautionary tale, really.

Where we can buy it?

The Adventurous Eaters Club is available at every major book retailer (Amazon, Barnes and Noble, IndieBooks, Books A Million) and lots of local bookstores. It’s also available on our website, adventurouseatersclub.com. (We’ll have family cooking merchandise available on the website, too—and 100% author profits go to charity, with a focus on organizations that do innovative garden-fresh food programs for children like The Edible Schoolyard Project, founded by Alice Waters, and The Garden School Foundation, which works with Title 1 schools to give underserved kids access to healthy foods by involving them in gardening and cooking.

What kind of recipes we will find in the book?

I can actually share over 100 recipes with your readers (in our book). How’s that for a shameless plug?

I can’t pick one favorite! But I’m a really big fan of kale, salmon, and brussels sprouts.

“Casual yet unstable, but it fits and I like it.” 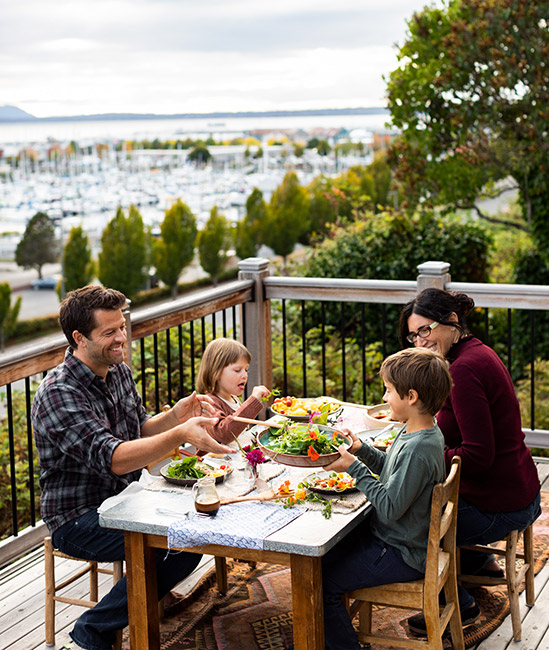 At this juncture, going on a first date might be a deal-breaker.

For late 2019 and early 2020, I’ll be promoting The Adventurous Eaters Club and shooting Supernatural’s final season. Beyond that, I may go on tour with my bagpipe death metal band. It’s so hard to predict the future.

When I’m present in the moment. That’s a pretty cloying answer, isn’t it?

Hectic, but filled with good fortune.

When nobody kicks me in the face to wake me up, that’s a pretty good start.

That’s a tough question. They both have their merits. I think probably that while I enjoy meeting people while I’m alive and want to do that for some time to come, I think I’ll say I’d rather meet someone when I’m dead. I feel like I’d have some unique experiences to share, or we could just sit quietly and they wouldn’t expect me to talk — and that can be nice, too.

Absolutely. 100% of author profits from my family’s new cookbook, The Adventurous Eaters Club, go to charity with a focus on organizations like The Edible Schoolyard Project, which focuses on developing curriculum to support healthy, local foods for schools and The Garden School Foundation, which works to help give kids at title schools access to healthy food by involving them in gardening and cooking. I’m also big supporter of Lydia Place, an organization in Bellingham, WA that helps women experiencing homelessness and their children. And of course, I’m pretty fond of Random Acts, the charity I founded with Supernatural fans.

Brain activity, air, and water, but the latter would take a while to be fatal.

It runs the gamut. I’m a huge fan of the thriving “polka rap” scene, but who isn’t?

It can be a tremendous platform for mobilization and social good — and, in the wrong hands, an incredibly destructive tool.

On a tremendous platform for mobilization and social good.