Laura Vandervoort is a versatile actress who not only crosses over genres, but also changes from character to character flawlessly embracing the essence of every role she plays. From being listed in Maxim’s Top 100 hottest women two years in a row, to being their April cover girl in 2014, to recently spearheading two national PETA campaigns, to starring in an upcoming studio film alongside Mark Wahlberg, Laura has been having an amazing year full of momentum. Best known for her roles on the television shows “Smallville” and “V,” she has built an international fan base of men and women of all ages. Between her beauty, experience and stellar acting chops, Laura has been consistently working as an actress since she was thirteen years old.

Born on September 22, 1984 in Toronto, Canada, Laura Dianne Vandervoort contracted meningitis after only six weeks of life and was hospitalized for weeks. She fought through the illness as an infant and has never stopped fighting for what she believes in since. A tomboy for years to come in her childhood, Laura was drawn to athletics, studying martial arts and playing on several school sports teams: soccer, karate (second- degree black belt), basketball, tennis, gymnastics, and baseball. She was always “the entertainer” as well, acting out characters and putting on shows for family and friends.

Growing up, Laura admired the work of Meryl Streep, the class Grace Kelly held, the off the wall twist of Tim Burton, the ever-so-compelling Canadian icon Gordon Pinsent, and Dustin Hoffman’s incredible craft. She first began her career in background work on Canadian commercials and TV shows, “Road to Avonlea” and “Harriet the Spy.” Laura landed her first speaking role at the age of thirteen, for the children’s series “Goosebumps” and then “Are You Afraid of the Dark?” She went on to take acting classes and book other TV guest star roles, such as Disney movies of the week “Mom’s Got A Date With A Vampire” and “Alley Cats Strike.” At nineteen, while attending York University under the concentration of Psychology and English, Laura landed the lead role of “Sadie Harrison” on the CTV TV series “Instant Star,” a popular series that ran for four seasons.

In 2006, Laura shot her first feature film “The Lookout” starring Jeff Daniels, Joseph Gordon-Levitt, Mathew Goode and Isla Fisher. Several TV appearances afterwards such as “CSI: Crime Scene Investigation,” led Laura into the hands of The CW network. Landing the coveted role of “Supergirl” AKA “Kara” on the hit The CW series “Smallville,” Laura became the main focus of the 7th season of the popular sci-fi drama. Following “Smallville,” Laura booked the sequel to the Jessica Alba/Paul Walker feature film “Into The Blue” titled “Into the Blue 2: The Reef.”

Laura has since continued on her superhero path voicing “Mary Jane” in the new Spiderman video game, which would be her second voiceover gig after doing three episodes of “Family Guy.”

Laura has guest starred on several series including “Haven,” “CSI-NY,” and “White Collar.” She has starred in Independents, most recently “Coffee Shop,” “Cubicle Warriors,” and the American film “Finding Mrs. Claus.”

Laura ventured into new territory, writing a children’s book series for young girls and boys between the ages of 7-12. It has since been developed with Shaftesbury films into a live action children’s series with exciting progress. Laura is the creator and executive producer of the project titled “Super Duper Deelia.”

Currently, Laura is the lead of the series “Bitten” for Syfy and Space., which is filming the series second season. ‘Bitten” is based on the New York Times Best selling series of novels by Kelley Armstrong. Laura plays ‘Elena Michaels’ the only female werwolf in existence. With high praise critically and a large fan following the series gained strength and praise for both performance and cinematography. 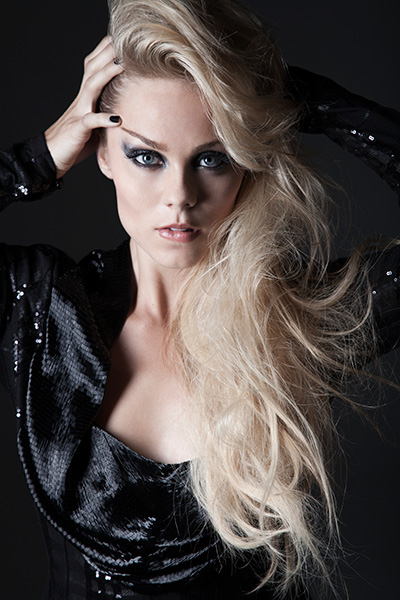 When did you first know you wanted to become an actress?

I was about 12 years old. I had mostly done sports and martial arts up until that point. I was shy and awkward but would put on plays for my parents with my cousin. One day I was watching the movie “My Girl” and the movie moved me. As a kid this was new to me. To cry and feel pain for the characters. The young girl in it was about my age at the time. It wasn’t long after that I asked my parents if I could try acting and they supported the idea. I took classes and did background work growing up in Canada. After some time learning the ropes, I was finally auditioning for speaking roles and doing children’s televisions series and Disney movies basically learning as I went along.

First role would have to be an episode of “Goosebumps”. I was thrilled because I watched it myself and I was terrified as well. I thought “Wow, they have no idea that I’m a fraud! I really do not know what I’m doing.” Years later I realized no one truly does. We are all hoping we aren’t found out to be frauds. 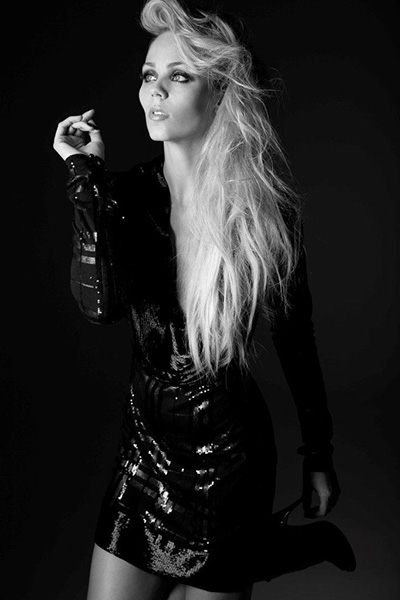 What has been your favorite role so far?

Most roles I have had the opportunity to play have taught me one thing or another. Some have challenged me, some have not…but I somehow always learn a lesson. “Bitten” is likely my favorite role to date. First of all, it’s my first leading role in a series. My character Elena is a complicated cocktail. Strong, confident, stubborn, broken, tormented, flawed, powerful and yet a loving and generous woman. Physically and emotionally, our writers and producers have given me such incredible opportunities to show all of her sides. I’ve felt challenged and fulfilled portraying her.

Falling in love with a role and then the rejection. Hands down.

What is the strangest thing a role required you to do?

I’d have to say eat my boyfriend. In “V” my character Lisa (Who was a lizard princess) discovers her mother made a replica of her. An evil twin if you will. Lisa’s twin seduces her boyfriend and post mating, fangs and all, bites into his jugular…licking her lips afterward. That was rather new for me haha. It was also the actors last day and last scene on the series. I felt terrible being the one to kill him but had a sense of enjoyment in playing evil. 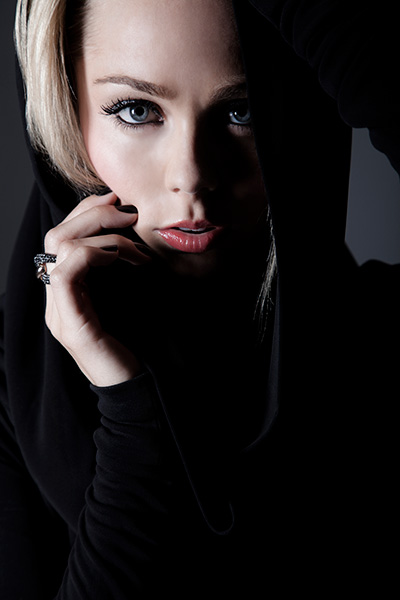 Gosh, well the obvious one is Meryl Streep. I, like most of the world idolize her. I also would have loved to work with Bette Davis or Audrey Hepburn. Both such risk takers and incredible to watch.

Why do you think so many aspiring actors/actress end up giving up on their dream?

It’s sad but it happens to all of us. This business is brutal at best. Rejection runs rampant. It is a daily occurrence no matter how well you do. It is a business that rarely and doesn’t always honor or reward those who work the hardest, prepare and study. It’s a business of “Do you fit what I have in mind?”, “Are you tall enough?”, “Are you brunette enough?” , “How many twitter followers do you have?” I mean it really is a gamble. I’ve given up a few times to be honest. You have to step away. The only way to handle it all is to stick it out, take a break and breather when needed, stick to your guns… move forward and continue to grow. I have never had a thick enough skin to deal with the constant criticism. You just have to develop tactics that help you move forward and onward.

How do you memorize so many lines?

Haha. I have no idea. Sometimes I find that when the pressure is on (Which it often is in television with very little time to memorize), I just memorize that much faster. But with auditions, I run the scenes several times alone and underline specific lines in every sentence that stand out. Then I run them in my head. I almost always hate reading them with someone else to prepare. I only truly do it out loud the day of the audition. It helps to also create a path. When I say path, I mean in your mind drawing a map of symbols that lead you to the next line. 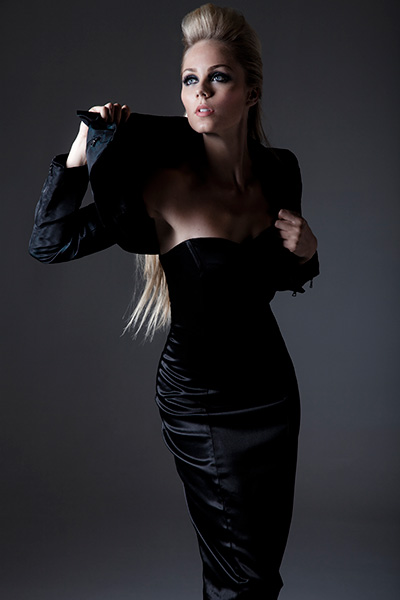 Now can you tell us a little about your role as Elena Michaels in Bitten?

“Bitten” is based on a series of novels by Kelley Armstrong. I play Elena Michaels, a 30 year old girl who truly hasn’t had it easy growing up. From growing up in the orphanage and different foster care families to putting the man that molested her as a child in jail. She has grown into a strong woman. A photographer in Toronto. She falls for her professor at University, Clay Danvers. Without knowing it, Elena finds herself in the midst of what she sees as a nightmare. Clay is part of a family of civilized werewolves. To protect her, Clay has no choice but to bite her, turning Elena into the first female in the world to survive the bite. Season one Elena is torn between trying to live a normal life in the city with her human boyfriend or following her animalistic instincts to be with her new “family.’’ Because she’s truly never had a family, the pack is an enticing and welcoming concept. This season, which we are shooting now…. Elena has accepted her fate as a woman holding a savage animal within. She’s blood thirsty, angry and seeking revenge for her human boyfriends murder. I’ve lost myself in Elena so many times while filming. The raw emotion of her past, her love and connection with Clay. Her anger and aggression. She truly is an amazing woman that I honestly admire. She plans to come out on top no matter what life throws at her.

How is working along with great and very handsome actors in Bitten?

Hahahah great. They are all wonderful men. Truly. I now have 4 brothers watching my back. 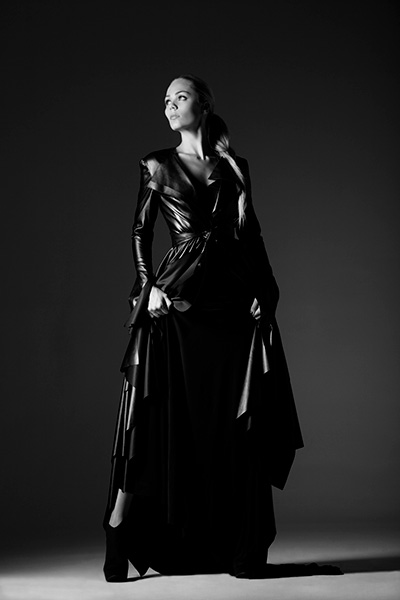 What’s your favorite place to eat?

Depends on what city I am in. In Los Angeles I’m a fan of Izakaya. I also really enjoy Real Food Daily lately.

If you were a dog, what would you be?

Wow, I’ve been told my dog Frankie and I are very similar? Hahaha. So I guess a Shih Tzu, Lhasa Apso? Honestly probably nothing pure bred. Hahaha. A mutt who appreciates a good home, a scratch behind the ear and cuddles. I also probably wouldn’t pass dog training. Too stubborn.

Quote: “ For small creatures such as we, the vastness is bearable only through love”- Carl Sagan

Bar or Nightclub: Neither… I just don’t even bother hahaha.

Holiday Destination: I haven’t been there yet but dream location would be Maldives or Bora Bora.

Day or Night: Day and Night. For different reasons. Day because it is a chance to start over and there is always the unknown of what the day will bring. Night because it is my time to be alone and think about EVERYTHING! A chance to relax and get into my ‘bubble’ of quiet. A Hitchcock movie or my favorite series on TV and some comfy pajamas. 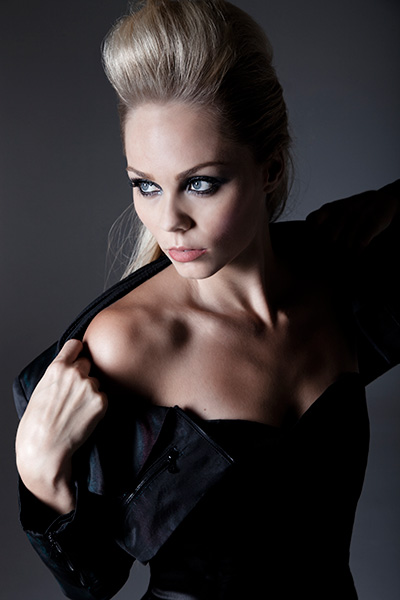 Interview and Photoshoot with Shiva Safai