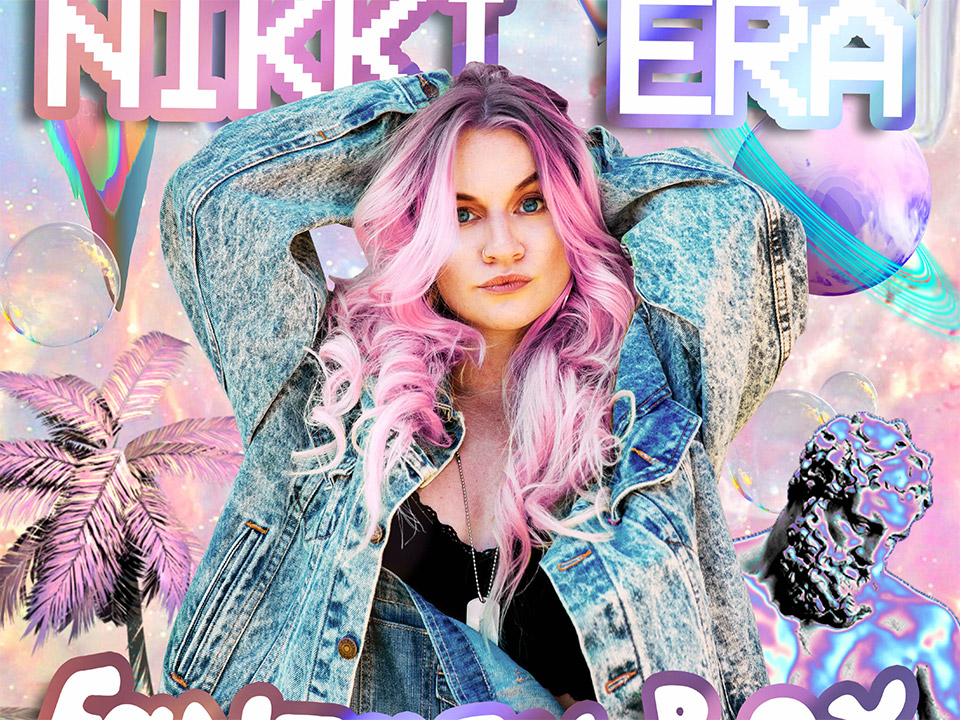 Nikki Era is swiftly being recognized as one of New York’s top singer-songwriters. Her hip-hop track she collaborated with rapper, Zak Downtown, “Won’t Stay Down” was handpicked as the featured song for season 2 of FOX’s music competition series, The Four: Battle for Stardom. Nikki’s songwriting career includes songs written for entertainment power house companies including Disney Channel, Universal and MTV. She has penned titles such as Nickelodeon star JoJo Siwa’s current hit single, “D.R.E.A.M.”, Meg Donnelly’s “Smile”, and Dove Cameron and Sofia Carson’s song for this summer’s highly anticipated Disney Channel Original Movie, Descendants 3. As a contestant on season 16 of American Idol, Katy Perry compared Nikki to a modern day Barbra Streisand and Lionel Richie thanked her for “blessing” the judges with her stage performance. Her latest single “Beating Hearts” soared up on Spotify’s Japan’s Viral 50.

Hi Nikki, please tell us a little about yourself?

I’m a singer/songwriter from New York City. I love NYC – it has really shaped me as an artist and as a woman in general. I’ve been singing and performing my entire life! When I was little I started out doing musical theater and eventually realized I liked the idea of writing my own words. I guess that’s what gave way to the songwriting.

I am an only child so when I was younger I would force my parents and cousins and baby sitters to watch my “shows”. They were really just me dressing up and putting on my mom’s heels and singing random words to popular songs on the radio. I never really imagined doing anything else.

Once I went to college (Boston University), I decided I wanted to move back to NYC and start a band. So I guess that’s when I would say I started “professionally.”

OMG YES! My family, mainly my parents are the most supportive people I could have asked for. They have always told me to follow my dreams. This business is super hard and really tests you. They’ve stuck by me through all of it!

I would honestly say a little bit of everything! And that’s why I’m so all over the place all the time haha and kind of where the idea for my name came from. I grew up driving around in the car on Sundays with my father. We come from a big Italian family and when we would go “visiting”, my dad would blast Motown music or Frank Sinatra and sing with me. He would play disco, and folk music. He played Pavarotti and big band music from the 40s and 50s. He really exposed me to everything and I’m thankful for that.

I’m a super old soul. I listen to new music when I’m driving around in my car or working out but on a Saturday morning I’ll usually pull up Spotify and go for Fiona Apple Radio or Motown Classics. Sometimes I’ll do James Taylor Radio. “Fire and Rain” is my favorite song ever written.

Tell us about your hip-hop track “Won’t Stay Down,” and your collaboration with rapper Zak Downtown?

When I met Zak, we hit it off right away. We didn’t even plan to work on that song together but it ended up that way and we were both pretty excited. We’re both from New York and we kind of have a similar outlook on the industry. He’s a real genuine guy and I always tell him he’s my favorite rapper! Haha so it’s fun that we had such a successful record together about adversity and sticking it out- especially in the industry we’re in.

And about the feeling of having this song as the featured song for season 2 of FOX’s music competition series, The Four: Battle for Stardom?

It’s such an ironic turn of events. I actually had just come back from American Idol. I was dealing with some personal stuff with my mom and I just felt like blow after blow I kept getting knocked down emotionally. I love that we are starting to see such an open dialogue on mental health because at that point in time I honestly didn’t know how to pull myself out of how I was feeling. I really just felt lost. Then I heard the record and I immediately wrote the words, “I fall down sometimes yeah my knees they got bruises on them” and the rest just spilled out of me. It’s like a slow pop version of Cardi’s “Get Up 10!”

How was to be part of Season 16 of American Idol?

It was a really cool experience. I’d never done it before and it was awesome to see how many talented people there are out there with similar dreams. I think everyone deserves a chance to have their voice heard and those shows give a platform for that.

And that Katy Perry comparing you with big names like Barbra Streisand?

That was a pretty crazy moment. She was a little quiet at the beginning of my audition so I couldn’t really tell what she was thinking and then she made reference to me being like Barbara and I just felt so cool. I grew up doing musical theater so that passion and delivery that comes from doing shows is always present in my performances.

One of my biggest female influences is Alanis Morissette. To me, “Jagged Little Pill”, is one of the best albums ever created. I also really love her story. I think she made a dance album prior to changing up her direction and I love the idea of her growing as an artist and evolving and coming out with Jagged Little Pill after doing some soul searching. It’s really an example to me of how important it is to try new things in your art and in your music and that’s what I’m trying to get across. Music is art and I know as my career unfolds I’m going to want to change up my sound and my look and explore new things with my music, so I hope my fans appreciate and are excited for those different “eras”.

Right now I really want to finish my EP and start building out the live show. Live performance is so special to me. It’s such an exchange of energy and a huge part of why I love being a musician. There’s nothing like being on stage and sharing those moments with an audience. Every time it will be different. You have to find a way to be present in those moments because each one is unique and gives you a feeling you can’t put into words. When people go to a Nikki Era show I want them to leave feeling like they’ve experienced something real, raw and passionate.

My dogs. My music. My family. My friends. Soy sauce.

To think of performance as an energy exchange. It takes the pressure off. It’s just like, “hey everyone I’m here to share what I love to do and I hope you love it too.”

I would say I get anxious. I want it to go well. I want people to enjoy it and take a message away from it or even just a feeling of freedom. I want them to feel better about being themselves. No matter what they feel or what they’re going through, I want them to feel strong and powerful. So I try to keep my nerves down so they can feed off of that vibe.

Writing more. Recording more. Performing more. It took me a long time to be this excited about a project. I still don’t have a name for the EP. I think once I’m done recording it will figure itself out. “Fantasy Boy” is the beginning of an awesome time for me and I couldn’t be happier I get to share it.

Be confident in your craft. The entertainment business is tough because it’s so subjective. It’s super competitive and it’s easy to lose sight of what makes you unique. It’s easy to feel like you’re fighting an uphill battle, but the best part about it is no one can take from you what is already yours. People aren’t your competition. They’re you community. Find other people who love doing what you want to do and create! Focus on creating. Not proving.

I think about this a lot. I love animals most of all. Even now I hope that music brings me success so I have a platform to discuss other issues that are important to me. I would definitely own an animal sanctuary/yoga retreat center. Like a little paradise where animals hang out and people take care of them and meditate through out the day. There’d be music too and workshops! Also, I just realized I described my retirement plan. haha

I think I’d meet Michael Jackson. I want to know if fame made him happy.

I do! I can’t not donate when I get stopped on the street so I think now I belong to 4 charities – 1 environmental 1 social and 2 animal based. But usually I send my Dad other charities I can’t afford and he gives them a monthly donation lmao. So collectively, I think we give to at least 10!

My collaboration with DJ Paige which was a cover of “I Think We’re Alone Now” that we called “Beating Hearts” is almost at 1 million streams on Spotify! I’m pretty excited about that.

Everything and nothing. Sometimes I love using fashion to explore identity and look FIERCE and other times I’d rather not use clothes to do that at all!

Somewhere between sweatpants and faux furs.

I like using social media as an art project. I really only use Instagram and I like the feed to look cool. I’m obsessed with gaudy symmetry and color patterns. But if people really want to connect with me it’s at my shows and in my lyrics.

Quote: “The world is tough darling, but so are you.”