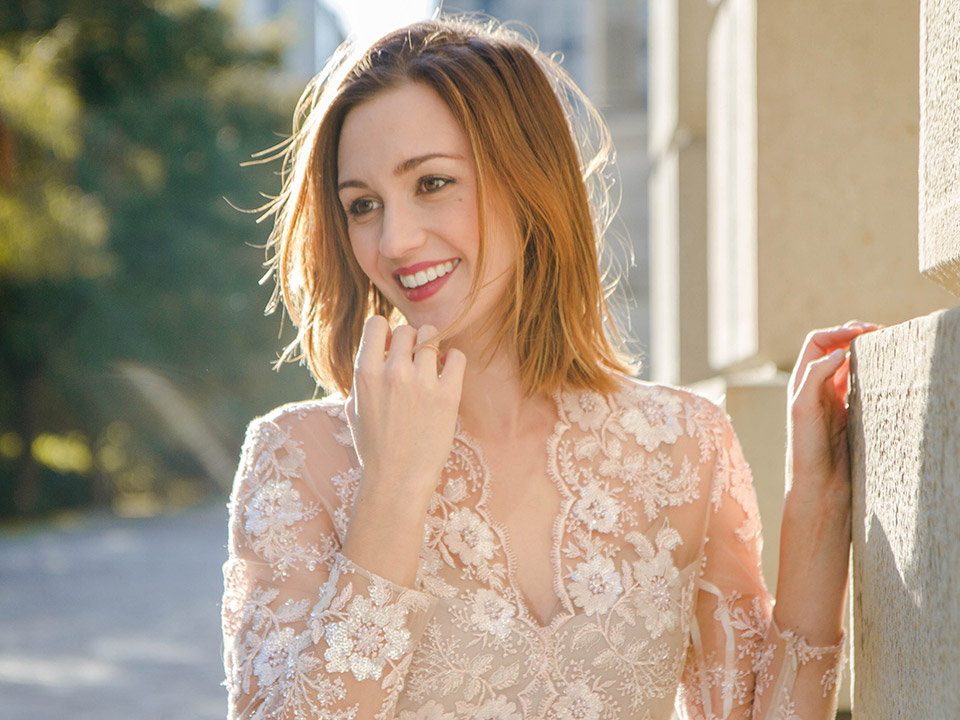 Check our exclusive interview with gorgeous Canadian writer, producer and actress Katherine Barrell who can be seen currently as Officer Nicole Haught in the popular Syfy supernatural series Wynonna Earp.

Hi Katherine, please tell us a little about yourself?

When I was around age 5 I was watching the behind the scenes footage from the making of Disney’s animated movie Beauty and the Beast. I saw Angela Lansbury I the recording booth voicing Mrs. Potts and that’s when it clicked for me that real people were playing those characters. I told my mom I wanted to be the “voice of the Disney” characters. Later in my grade 8 year book I wrote that I wanted to be a film director.

Professionally I did several plays and musicals with my school and community center growing up and went on to attend Classical theatre School at George Brown College.

Nope! We have engineers, accountants, farmers, nurses, business-women. No one knows what happened to me!

Oh definitely I try to continuously be learning on the side – either taking a scene study class or a directing / producing workshop. I have a diploma in Business Management for Film that I got through attending weekend / night school after I graduated college. I wanted to continue to produce my films and knew I needed to understand the business side of my industry to do so. It wasn’t the most fun thing to trek out to first thing on a Sunday morning but the learning has been invaluable for me! Through my company, Kit Media, I have produced 7 short films, three of which I directed. I have started working on my first feature.

I really like playing my character, Nicole Haught on Wynonna Earp. She is strong, confident and I love playing a cop! I tend to enjoy playing career women who are doing “non-traditional” female jobs. I learn so much about other industries and it’s rewarding to be part of hopefully breaking down barriers for women in these worlds.

I would really love to work on a period piece in the near future. I love learning about history through these shows and the costumes are always incredible. I am also desperate to work on some Shakespeare sometime soon – I miss it so much from doing it in school.

Tell us about “Wynonna Earp” your character Nicole Haught?

Nicole is a Deputy Officer in the small town of Purgatory where the show takes place. She has recently started dating her crush Waverly Earp – after a season of very patient courting, which I salute her for! Is Season One Nicole learns about the supernatural happenings in purgatory but struggles to keep her hunches a secret. Nicole is strong, sensitive and confident – but she definitely has a few vulnerabilities which we will start to see come out in Season Two. I am loving the opportunity to explore this more vulnerable side of her that is a little rawer than the Nicole we saw in Season One.

I have done several different TV shows and features but my latest project just premiered on the CBC. It is called Workin Moms and I play Alicia Rutherford who is an up-tight “perfect” mom who makes her own organic baby food, sews diapers etc. She drives the other mothers in their weekly Mommy & Me group nuts! I had a blast working on this show full of fantastic, strong female comediennes. I feel confident that Workin Moms will show in the states in the near future!

Meryl Streep has always been an inspiration to me – as she is for many, many people. As an actor, I love admire the diversity of roles she takes on – from seriously drama to a light costume-comedy back to back. I find a lot of actors unfortunately get stuck doing the same genre over and over. Meryl is one of the best actors of our time without a doubt. I am also a big fan of Emily Blunt fan Jennifer Lawrence – both versatile and fearless

One of my wonderful castmates, Shamier Anderson, gave me some great career advice. He told me “You are in the business of Katherine Barrell. You have to make decisions that are best for your business”. As an actor our work can seem so personal, it can be hard to ask for a raise or say no to something or even promote yourself because it can feel self-serving and shallow. Every time I am struggling with that feeling I think, “If I was selling a t-shirt right now I would be promoting the sh** out of it, I would talk it up at events and charge a fair price for people to buy it.” This mindset helps me remove myself from the equation and make more strategic choices for the longevity of my career. There’s a saying “it’s Show-business not show-friendship” this is good to remember when things start to feel personal.

I think today you really need to develop a multidisciplinary mindset. If you want to be an actor in film also seek out opportunities to work behind the camera. You will become a much better actor by observing from the other side and gain such an appreciation for all the other jobs on set – it really takes a village of people working in perfect harmony to make a movie.

Also – this may seem counter-initiative – but you absolutely must foster some hobbies you are passionate about that have nothing to do with acting. When you have other aspects of your life that you are excited about the acting is only a part of you. That way you won’t walk into audition reeking of desperation to “get the job” because you really are a fully formed person outside of that audition room. Have other things you can talk about with people – be interesting! How many times do you audition to play the part of an actor? Almost never! So go figure out how to be a really rad human being. It’s much more attractive than a desperate actor.

What’s one of the funniest or memorable thing that have happened to you on set?

My first day ever working on set I was playing a guest-star part on an ABC pilot. Still the biggest most expensive set I’ve been on to this day! My first scene up I was partially nude, murdering a man in a bathtub. On set when the first assistant director calls out, “back to ones” it means all actors, camera, crew go back to your first mark to reset from the top. Of course never having stepped on a film set I didn’t know that. So we do the first take and “back to ones” is yelled out. Everyone is scurrying around me and I am standing there still in the middle of the room, soaking wet, almost naked like a deer in the headlights. Nothing since has ever been that mortifying – so it really was all downhill from there!

I am obsessed with The Affair on Showtime. I love the storytelling style of playing the same scene multiple times from a different character’s point of view – I think its brilliant. I also love Amazon’s Transparent and Black Mirror on Netflix. I love the risks the subscription-on-demand platforms are able to take because they are not tied to the red-tape and bureaucracy that sometimes comes with a network. TV is just SO good right now!

Broth of any kind. I could eat a brothy soup every day of my life and be thrilled about it

Sleeping in and going out for a tasty brunch, followed by a hike in High Park here in Toronto with my partner and our dog then having some friends over for dinks in the evening. Or going to a water spa and floating around in a salt-water pool all by myself for a day!

I am a brand ambassador with @GirlTalkEmpowerment and their #PinkBox initiative which deliver positive message lifestyle products to women age 12 and up. I followed the awesome work of Girl Talk for a few years before I became an ambassador. This amazing organization runs courses throughout the year which provide leadership opportunities for girls, positive body image counselling, teamwork seminars and confidence building.

My partner and I just purchased our first home so in my spare time I am really enjoying seeking out new pieces of furniture and art for our space. I have been saving for my first home for ten years now and it’s finally a reality so I am incredibly happy about it! I also have some fun DIY projects (such as leather drawer pulls and platform bed building) planned for when I am home from shooting on Wynonna Earp in the spring.

I want to continue working on many different genres of television and begin directing on some larger projects. I’d also love to take some time away to do a directing intensive in the next few years.

It is very important as it is the place I can connect with my fans. They are incredibly supportive and encouraging and whenever I am having a sad day or not feeling confident reading their beautiful messages lifts me up. I am so lucky to have them!

Quote: “I will hold myself to a standard of Grace not Perfection” – Unknown & “One cannot discover new lands without first consenting to lose sight of the shore for a very long time” – Andre Gide

Book: Right now I am reading a book of incredible essays entitled “The Opposite of Loneliness” by Marina Keegan

Movie: I just saw La La Land and I thought it was incredible – moving, truthful, cinematic, magical. I was so inspired by it.

Food: Oh this is tough – I love eating! Anything Mexican at the moment.

Travel destination: I went to Delhi India to do promotion for a film last year and it was incredible! The next trip is to England for a fan convention then spending a couple weeks touring Ireland and Scotland.