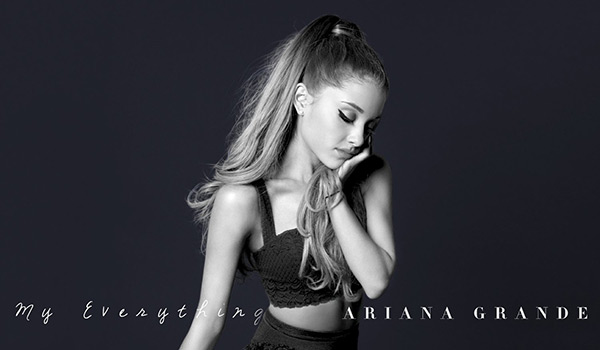 ARIANA GRANDE’S MY EVERYTHING CERTIFIED PLATINUM BY THE RIAA Closing out a monumental year, ARIANA GRANDE’s critically acclaimed chart-dominating second full-length album, My Everything [Republic Records], has achieved platinum status as certified by the RIAA.

In just three months, the record has sold over 1,000,000 copies. My Everything joins In The Lonely Hour by Sam Smith and 1989 by Taylor Swift as the year’s top-sellers to hit 1,000,000 in sales. My Everything is Ariana’s very first platinum full-length album.

Meanwhile, her original holiday single, “Santa Tell Me”, is shaping up to continue this string of successes. Within a week since debuting, its lyric video has already exceeded over 1.5 million YouTube/VEVO views. The official music video for “Santa Tell Me” is coming soon.

Fans can experience My Everything live this month when ARIANA hits the road as a headliner of the iHeartRadio Jingle Ball tour. It begins December 5 in Los Angeles, CA at the Staples Center and concludes December 21 at the BB&T Center in Sunrise, FL. It also sets the stage and raises excitement for her 2015 headline jaunt The Honeymoon Tour, which is poised to be one of the year’s biggest music events.

2014 has been the year of ARIANA. My Everything became her second album to debut at #1 on the Billboard Top 200 in less than twelve months, quickly approaching gold status and becoming the year’s biggest album in the process. It yielded four hit singles including the triple-platinum “Problem”, “Break Free” featuring Zedd, “Bang Bang” with Jessie J and Nicki Minaj, and “Love Me Harder” with The Weeknd. Right now, she’s gearing up for her first North American arena headline tour, The Honeymoon Tour, in 2015. It’s bound to be one of next year’s biggest events.