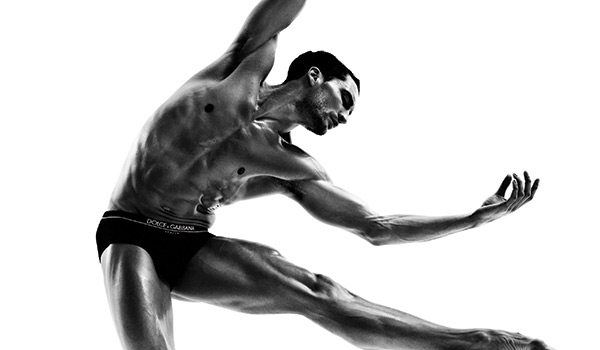 Fabrice Calmels is an impressive figure. His stature, flexibility and grace put him at the top 1% of athletes in the world. His sport is so rigorous and demanding that he treats his body like a finely tuned machine.  Surely, I’m speaking of football or basketball right? Maybe baseball? Nope, many of those athlete’s actually turn to this 300 year old sport to improve their own game.  I’m speaking about a little known sport in the U.S called ballet.  If you think that ballet is nothing but women in pink tutus and little men running around a stage, think again.

Fabrice has changed the face of ballet.  At 6’6” Fabrice is a presence on stage like no other.  He is the tallest Ballet dancer that the Joffrey Institute in Chicago has ever had the privilege of working with.  The fluidity with which he can control his body would bring you to tears when watching him perform. Many people don’t understand that ballet is very physically taxing.  Imagine carrying the full weight of your body on your tiptoes and forcing yourself to move gracefully and with such artistry that you can bring an audience on an emotional journey without speaking a word.  Fabrice began learning ballet when he was about 4 years old. He followed along as his sister attended ballet class in France.  After a while the teacher decided that she wanted a male student in class and Fabrice was it.  Fabrice enjoyed it from the beginning and it sure wasn’t the lack of girls he was around. Eventually he saw the challenge and discipline within the sport and when he was accepted to the prestigious Paris Opera at the age of 14.  He was very proud of his early successes and knew this was where he belonged.  The Paris Opera became his second family.  He went to school with the same students in the Opera. The camaraderie was intense. His teachers constantly pushed him. They expected the best. There were moments when he thought of doing something else in life. He loves Math and wanted to become a teacher or a pilot but he was so ensconced in ballet and loved the challenges.   As a dancer he has always had intense moments that continued to change him, but one moment that stands out is his performance in Jiri Killian’s, Return to a Strange Land.  “The Paris Opera was known for its classical ballets.  Bringing this new genre to the stage was fascinating to me.  It was a challenge to me because this was a very new way of performing.” Fabrice is passionate about bringing ballet into mainstream society.  He is adamant that it is not just for girls.  It is a rigorous sport that requires dedication and passion. “It is the hardest form of athleticism out there.” With most sports flexibility does not marry well with speed, strength and coordination.  If you think of a football player they might have strength and speed but do not have flexibility.  This brings ballet into another form altogether.  The training program with the Joffrey Ballet is very challenging.  We are put through rigorous training and there are very high expectations.  There are only an average of 40 ballet dancers in the company. You must be on top of your craft at all times. Once people see what we, as ballet dancers have to do to marry speed, strength, coordination and flexibility they are amazed at what we can do. It is not for everyone and very few can do what we do.  This is a wonderful form of discipline and Fabrice hopes to bring awareness to young people about the ballet. One such project he is working on is “Ballet Monsters”. He is hoping to make an animated movie about aliens taking over, while the leader falls in love with a beautiful ballet dancer on Earth.  As Fabrice describes the plot I cant help but feel his passion and excitement for the ballet.  Fabrice never gets tired of what he does.  It makes him happy to do something he loves so much.  He could not imagine retiring anytime soon.  On his down time he loves to relax and just watch movies.  Behind the serious façade he truly is a jokester, he loves knowing that people think he is very serious, then pulling a prank or two to keep things lively within his company.  To get a true sense of what a ballet dancer is capable of you just have to watch a performance for yourself.  There isn’t a better performance to start with then The Nutcracker. Fabrice will be performing with the Joffrey Ballet from Dec 6- 28th.  It is a graceful and moving performance done every year and completely worth it.

How to Choose the Perfect Gift for a Loved One

6 Tips to Shoot a Great Interview

How to Ensure Optimal Indoor Climate All Year Round