Check out our interview with NY based designer Subin Hahn. Taken from traditionally feminine elements, his designs challenge traditional mens and unisex fashion aesthetics, aiming to provide equality in the current fashion industry, while embracing his or her own ambiguity and fluidity.

Based on his belief that art is a spiritual activity that conveys one’s faith and belief, he aims to help the wearers bring out their own spirits through his designs and to give hope of a better future, by creating the illusion of a world that he wishes to belong with. Tell us about Subin Hahn.

I was born and raised in Suwon, South Korea, and received a Bachelor of Fine Arts degree from Parsons School of Design in New York. I worked for luxury fashion houses exploring many different fields including Zac Posen, Marchesa, Calvin Klein, Vaquera in New York, and most recently worked at Marc Jacobs for runway and contemporary shoes design. I am very interested in gender and equality issues related to fashion history, which led me design my own clothing brand focusing on the gender fluidity. I’m obsessed with the 70s and 80s fashion and music as well as classic Walt Disney animation films, which take huge part of the influence in my design aesthetic.

What inspired the creation of your brand?

I always questioned why men’s fashion has such limited options compared to womenswear, and even most of unisex/gender-neutral clothing is always somehow an alternate version of menswear such as basic t-shirts and jeans. I felt it’s quite unfair that somehow masculinity is always a standard in many ways in fashion so I wanted to make change and bring diversity for guys like myself who don’t want to fit into the stereotypical image of men.
During my design process as a student at Parsons, I experimented with the idea of fluidity by putting silhouettes and textures that are traditionally used in women’s fashion on both male and female models to see how the same design looks on different bodies. I loved seeing the ambiguity created by the collision of male body and feminine beauty, and also very intrigued by the idea that flamboyant fashion can also be worn by anyone regardless of gender. This idea of gender fluidity – that clothing has no gender and can be worn fluidly between men and women is the essence that inspired the creation of the brand that I call “Fluid Wear”.

We see that you play with colors a lot, where did you get the inspiration behind your current collection?

Princesses, princes and other characters from classic Disney animations are huge inspiration to me. The vibrant mix of colors and fluid contours of each character are the elements that I translate into design lines, silhouettes and color choices, which is how I envision freedom, love and acceptance in a heaven-like environment in a metaphorical way.

For my most recent collection, I incorporated some imagery taken from many different locations in my hometown in South Korea. Each look represents a specific location in solitude as the only child growing up in a conservative environment that labeled me as “girly boy”, and how I overcame the struggles with the love and empathy I received from my close female counterparts.

Landscape paintings are also one of the things that inspire me when I design because I love the idea of how each different environment evokes the viewer’s emotion with its own unique mood. I admire the artworks of the American artist, Mary Blair who designed background concept arts for the classic Disney movies such as ‘Cinderella’, ‘Alice In Wonderland’ and ‘Peter Pan’. Her use of colors and highly stylized designs are very inspiring and I often reference her artworks in my design process.

What advice can you give to designers in the making?

I believe it’s important for designers to have a strong purpose for what they are creating. Fashion is not just about making pretty clothes because it has a direct impact on society in many ways. Whether it’s political, economic or psychological, a designer should have his or her own unique view of why their work should exist in our world.

Where do you see your brand in 5 years?

I wish the brand to expand its business in the North American markets. As an independent designer, it is difficult to manage every single aspect of running a brand, especially in the business side so hopefully I can have partners to work with in the future to grow sales in the markets. 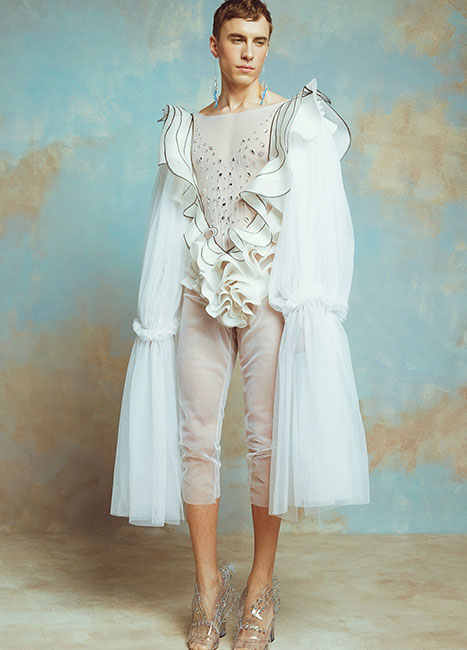 Which designer do you admire and why?

I look up to the designers who challenge themselves and strive to create difference against what’s considered as “normal” by the society they live in.

Historically, Yves Saint Laurent burrowed mens fashion and appropriated it for women as a way to challenge the preconceived gender norms, which was very controversial by that time compared to nowadays it’s widely accepted in society for women to wear suits and pants.

Alessandro Michele from Gucci, Alejandro Gómez Palomo from Palomo Spain, Thom Browne, and Jonathan Anderson from J.W Anderson are the contemporaries I admire as they challenge the traditional menswear aesthetic in their own way as I love seeing menswear becoming more diverse in the current fashion industry that is moving towards the increased equality.

What is the vision behind the brand?

I wish my brand to be a platform of inclusion for people who feel like they are outsiders. I envision more inclusive fashion that is not conforming to the traditionally constructed ideas of how men and women should dress, but more focusing on individuality. Subin Hahn, Fluid Wear started as a brand to envision love, acceptance, freedom and equality through the fluidity of fashion.

How much time does it take you to create a collection?

Generally, 3-4 months of time from research to samples production. I used to design two collections a year, but given the current situation I decided to do only one collection a year by making every item as season-less to prevent overproduction and to focus more on the quality of each garment, as well as to have more time for creativity and experimentation.

What’s next for Subin?

I will keep telling my stories and visions of fluid beauty through my designs. Whether it’s a full collection or a special project, the essence of the brand and its identity firmly stands on envisioning the spectrum of beauty between feminine and masculine, and to have positive impact on the future of fashion in diversity with less restrictions and uniformity.

I wish to collaborate more for special projects to create one-of-a-kind custom pieces with many different celebrities and VIP clients who believe in the same vision that I have.

Where can we find the collection in the USA?

Currently the line is only available for press promotions in Los Angeles through Now PR agency and privately in New York City by appointment. Please send general inquiries to [email protected]