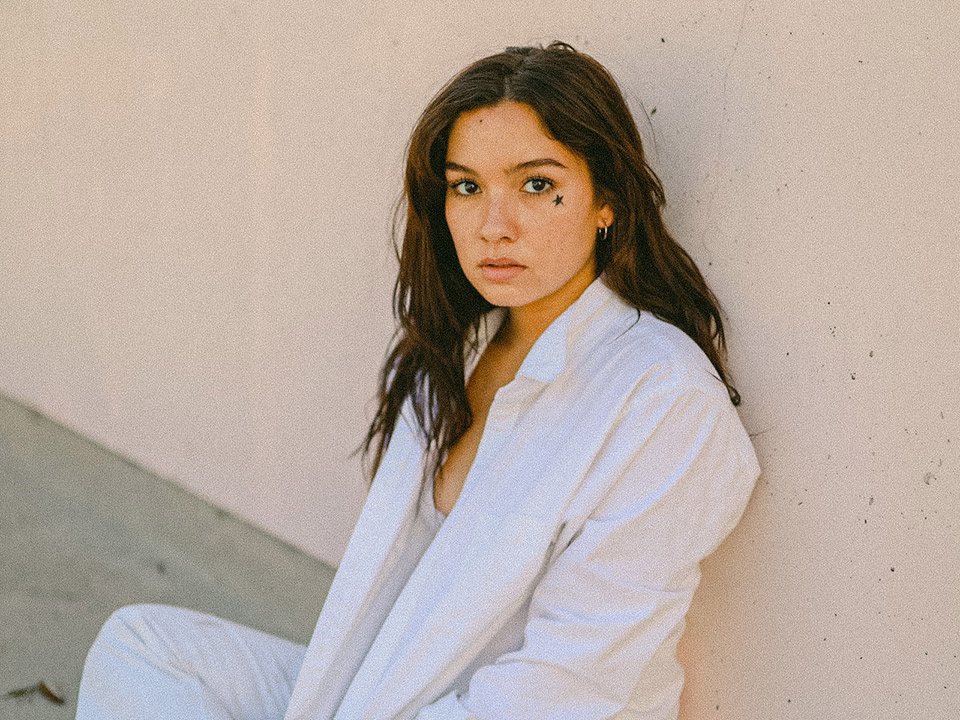 Check out our interview with singer and actress Sydney Agudong (a.k.a Jayne Doe) who just released her debut single “Welcome to Hollywood.”

She confides, “It describes my own adversity and experience with pursuing my dreams and it is more of a metaphor for everyone and what it means to put your health and heart out on the line without knowing what the future holds at any point in time “Hollywood’ is glamourized as a place where people can be whoever they want to be and live out their wildest dreams, but no one ever talks about the thousands and thousands of rejections and thoughts of giving up and giving in to one of those critics or “no’s” that tell you it’ll never happen, whether you or someone else is the critic themselves. No one talks about the mental strength and sacrifice it takes to make a dream come true.”

Hi Sydney, please tell us a little about you?

I was born and raised on the little island of Kaua’i in Hawai’i and lived there my entire life until I moved to LA after graduating from High School in 2018. I was introduced to the entertainment industry at a young age and knew I would eventually be a part of it. I spent several years in theatre and local talent shows and pageants, which is where my love of acting and my need for a talent (singing) came into play. In 2012, when I was 11 years old, my sister (Siena Agudong, 7 years old at the time) and I started traveling back and forth to LA for auditions. When I started high school, I decided to start focusing more on social life and school, while my sister continued her acting pursuit. In my Junior and Senior year, I began to find my love for songwriting. I graduated in 2018, and decided I wasn’t done pursuing entertainment, and decided to move to LA at 17 years old and am still here today.

I debated my artist name for a while – thinking of a way that would represent what I believed in as an artist. At some point, I almost settled with using my name because that made the most sense. But I realized that my goal as an artist was way bigger than just me. I am here to remind people of how much we still have to learn about each other and the world and how okay it is to feel lost. In today’s world, it is so hard to remember where you can gain strength in being the student not the teacher. I think it could be cool to be both. I don’t know all the answers to life and I don’t know who I am but I would love to find out and then share it with the world. And maybe, just maybe it’ll make someone out there feel a little comfort in the unknown. The “Jane Doe” phrase we know refers to a female with no known identity. My artist name, “Jayne Doe,” is a girl trying to find that identity. The best way I can describe her is as my own version of “Hannah Montana.” I am not her and she is not me, Sydney Agudong. She is a musical representation of the person with whom I look up to be. A girl shamelessly lost and open to all that life has to teach her.

As an actor, I always loved theatre and was in awe of the kids I watched on tv and in movies. I remember specifically when I told my mom about wanting to be on TV. When I was 9 or 10 years old, I was scouted by my (current) theatrical manager through a workshop she did while visiting Kaua’i. She told me that my sister and I should come to LA. Two years later, that’s what we did.

Soon after moving to LA, a friend of mine put me in contact with Al Machera, CEO of Westlake Recording Studios. Our meeting was supposed to be for motivational insight and advice, however, it soon turned into a Co-Publishing deal as a topliner/songwriter for Fr8 train Music Publishing – a branch off of Westlake Recording Studios. I was so hesitant about the idea of being an artist for a long time before I actually decided to pursue it. I got it into my head that being the face of my own songwriting defeated the true purpose of why I wrote: to share something I thought was important with the world and let it be received without the need for recognition. But a year later, and after a lot of soul searching, I realized I wanted to be the one to tell my own stories and there came my decision to be an artist.

I have always felt like I wanted to change the world and how we all look at it. Sounds cliche but it’s true. I used to write songs and poetry for myself and others in hopes of giving light to situations that others may not have seen yet. I wanted to be a part of something bigger than myself, and my family believed in me to do it from the start. My family and I are extremely close and my parents are truly the reason why my sister and I are able to do all of this. My dad is the reason music feels like a part of me. He always has music playing somewhere – in the car, at home, or from his guitar and he taught me how much I could learn from it. My mom is the reason I have faith in myself, she sacrificed a lot to pave me a way and say go for it. My sister is the reason I don’t give up. She started acting at the same time I did, but at a way younger age. It didn’t come to her easily but it came deserving. She just kept going and kept believing. Four years younger and a few inches shorter, and I look up to her every day in awe, and I am constantly and shamelessly inspired to be more and do more, because of her. 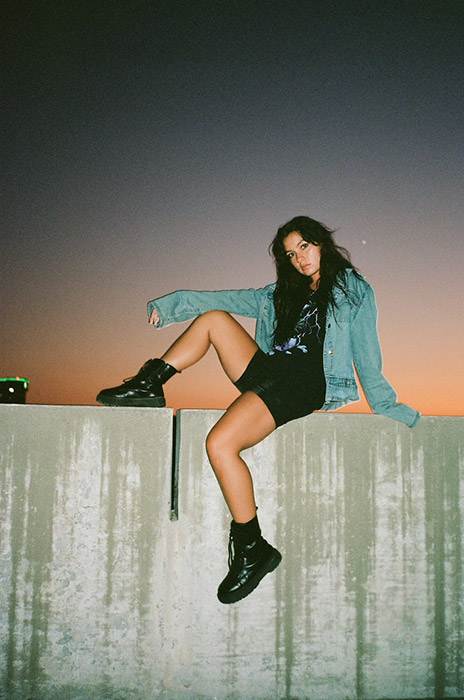 Tell us about your debut single “Welcome to Hollywood?”

I have spent so many years wanting to release music, but no matter how hard and how long my team and I tried to pursue it, I always felt like something was still missing. It never felt like me. I have met some incredible people while in LA, and have been blessed with so many amazing opportunities. With that said, LA was a culture shock and the unforgiving parts of pursuing this sort of career took me down to some pretty low places in my mental health, where I felt incapable, alone, and so lost. I distanced myself from friends and family and dug myself deep into self-deprecation and self-sabotage. And I know COVID didn’t help with that, I know it affected a lot of people mentally for good and bad. I wrote “Welcome to Hollywood” when I was trying to find my way out. I got to the point in chasing a dream that I never truly took into account. The toll it takes on your own self worth as a person, this incredible roller coaster of unknowns that lead you in and out of control and bring you to the point of facing reality and asking, “what am I even doing?” and “is this even worth it?”. This song is about my relationship to my dreams in Hollywood, but everyone has their own “Hollywood” in some way. I really just wanted to take the time to say “Kudos to you for doing the dang thing. I promise it’ll all be okay”.

The most rewarding part of the work is knowing how many people I reached and knowing that I did it from a place of absolute honesty. I want to be able to share myself and my thoughts with the world and make it known that being yourself is all you need and when people connect to my truth, I know that I’m doing something right.

I think it’d be something along the lines of family for sure.

What’s next for Sydney Agudong for 2022?

My goal is to introduce myself to the world as an artist and as an actor and come out with a bang. As far as music goes, I will be releasing a music video that I’m extremely excited about for “Welcome to Hollywood” after it’s debut release! Stay tuned for that!! I am also planning to release many more singles this year with hopes of an EP at the end of the year. In the acting realm, I am finishing up a web series that I starred in that should hopefully be released this spring! I also have some independent film projects that are in the works right now that I will hopefully be filming this spring and later this year, depending on COVID. Very excited!!

Acai bowls with nut butter – how is it good and healthy? I don’t question it.

I have a major sweet tooth… cheesecake? Anything chocolate and peanut butter? All great.

It kind of shifts every now and then but I am never against my go to jean on jean. I like to change up my haircut and color a lot because I feel like it gives me a fresh start in more ways than one. As the artist, Jayne Doe is a confident and lost soul, and I think her style ranges along the lines of how she feels and grows,. who knows where it will go from there.

I am really big on mental health and the environment and there are a lot of charities like that that I support as well as just going to beach clean ups.

Currently my favorite song is “Caroline” by Briston Maroney. He is so talented and honest and I love what he has to say in this song in particular. Also, I’m just putting it out there now that I will work with him someday.

Quote: “Everything happens for a reason”

Tv Series: “Friends” is my little comfort at any time or day.

Favorite Food: I will never get over a solid mac and cheese no matter how old I get.