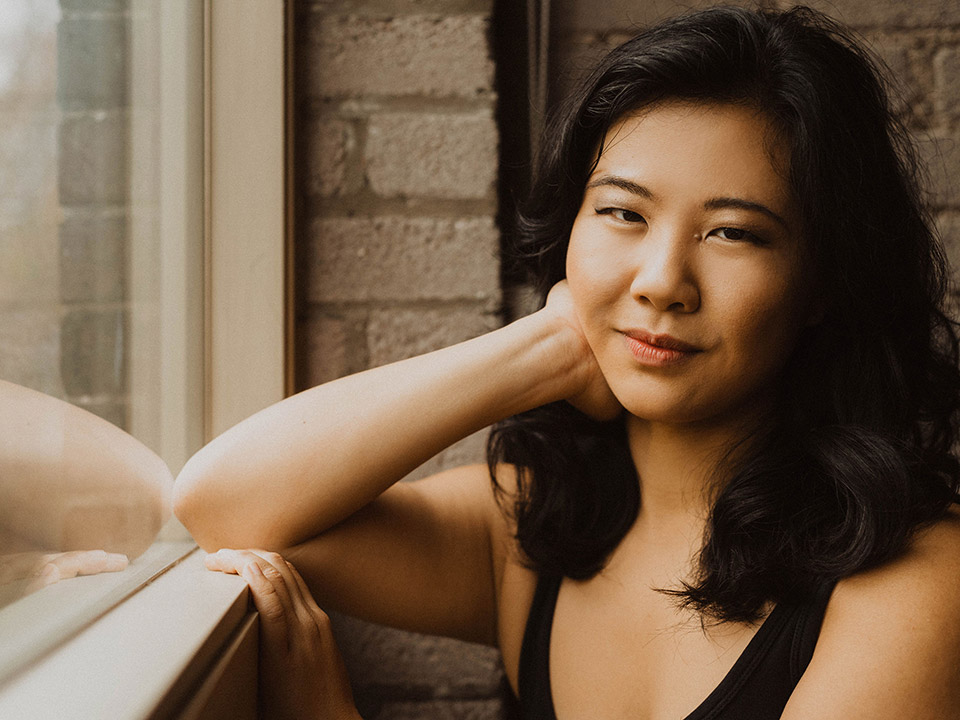 Check our interview with talented actress Samantha Wan who stars as Zoe Chow in Private Eyes. The TV show is about a former professional hockey player named Matt Shade (Jason Priestley) who hangs up his skates and upends his life irrevocably by teaming up with intense Private Investigator, Angie Everett and becoming a detective.

Hi Samantha, please tell us a little about you?

Sure, I’m a Toronto Actor/Filmmaker. I co-created a prime-time television series in Canada called Second Jen. This year we were nominated for Best Comedy Series at the Canadian Screen Awards (which is our equivalent of the Oscars). I also play Zoe Chow on Private Eyes starring Jason Priestley. Im addition, I’ve created an award-winning Kung Fu webseries for OMNI Television called Sudden Master. I like chips over chocolate, and I’m a 50-year old cat lady at heart.

Every day is different. It’s why I chose this job and why it’s so difficult. If I’m not in production, I have to be self motivated. It’s easier for me to describe a week… In a week if I’m not working on a specific project, I will usually have done the following

– Auditions/Self Tapes
– Daily Journaling, intuitive writing, or work on a pitch
– Meeting contacts to discuss potential projects
– Yoga, Mindfullness Mediation 3-5 times
– Researching new grants, program opportunities
– Play and get scratched by my cat
– Beat my boyfriend at a board game

My Mom. Especially when my dad told me I was going to be homeless if I wanted to be an artist. She gave my father hell and made sure I could live my dreams. She’s still my number one fan and the person I celebrate with.

I went to the National Theatre School of Canada for acting. That is when I became serious about the industry. I got into filmmaking, by acting in this little horror film called The Devil’s Mile. I met a lot the team that I later brought for Second Jen and Sudden Master. It’s a movie worth checking out. Both Amanda (my co-creator) and I play Japanese school girls who get kidnapped.

Dorothy from the Wizard of OZ in middle school. There were two Dorothy’s and I was not the favourite haha! Lets say those scars took awhile to heal, but nothing does that like having your own TV show. In film, it was The Devil’s Mile (see previous question).

I did a very intense three year conservatory program at the National Theatre School. It’s like our Canadian Julliard, often with the same teachers. Six days a week, twelve hours a day. We only had one day to do laundry and make food for the rest of the week. After I graduated I had to take some time to figure out how to be regular person again. Now I do some classes to stretch my acting skills at a studio called The Dirt Underneath.

The best part is the costumes. I’m kidding – but not really. The best part is that you can be anybody. I didn’t know what I wanted to be when I grew up, so I picked a job where I could be everything. My job is to PLAY. The unexpected part is through playing others I continue to learn more about myself.

You have VERY LITTLE control over your job as an actor. It is by far the hardest part. You are always waiting for someone else to give you permission to do your job. A casting has to say yes to the audition, then the director/producer has to say yes to hiring you (and they won’t tell you if it’s a No). You have to reapply and reprove you can do your job EVERY TIME. No one asks an accountant at the start of each file, you sure you still know how to do math?

It’s hard. I’m a work hard, play hard type gal. When I’m acting or behind the camera, my life is consumed. Then when the project is done, I take time off to travel and catch up on my relationships. The best thing is to surround yourself with understanding people and friends who are in the same boat.

Failure is inevitable so… Fail Hard. Fail Fast. It’s not a life sentence, it’s an opportunity to change what you are doing. The more you fail, the quicker you’ll get to success. Also have a specific idea of what success looks like to you, so you can stop wasting your energy on what the world wants.

I’m very visual. when I first get a character I like to create a scrapbook of images, people that look like them, outfits they might wear. If it’s for a pre-existing show, I do a lot of research on the previous episodes to understand the tone. I try to find what I can bring to the character that is uniquely me. I work through a script writing first impressions for things like goals, tactics, obstacle, etc. Then I sleep on it and meet up with an acting friend to play around with the script and see what sticks.

Now tell us about your work on “Private Eyes,” and your role as Zoe Chow?

I love the show. Zoe is the intelligent but odd assistant in the Everette Agency. I take my internal anxiety and social awkwardness, then wear it on my sleeve as Zoe. She really gets into whatever she is doing, even if she is completely wrong, which lends to her comedy. It can be as simple as trying to fix a door, or as big as going undercover, Zoe will find a way to take it to extraordinary measures.

Nicest man on the planet. To everyone. He really looks out for the cast and crew on set, and will speak up if something in the story doesn’t seem right. I’ve learned a lot from him about the effects a good lead actor can have on a show.

I’ve been doing a lot of comedy lately. The rare occasion when I get to do physical comedy, is a treat. Now I would love to get back to doing some dramatic roles. I often play lower status characters. I would really love to play someone in charge, someone who commands a room. Because of my martial arts background I would also love to play a big budget action hero.

Alex, in my kung fu series Sudden Master was probably the hardest. Mostly because I was doing all my own fights and stunts on that project. We had six different fights and a couple weapons. I later won Female Action Performer of the Year at the LA Action on Film Festival, so it paid off.

My favourite character? I played Rosalind from As You Like It in school. That is a role I would like to reprise one day. Playing Jen ( Second Jen) and Zoe (Private Eyes) have been a blast as well. I don’t know I’ve loved all my roles. It feel like picking a child.

We start shooting the next season of Private Eyes this summer! I’m really looking forward to that. In the mean time I’m also going to be making some smaller projects of my own to further develop as a director and writer. I’ve also just started to travel to LA more regularly for work so you never know…

I’m on a Sandra Oh kick right now. Did you see her host SNL?! mic drop enough said. I also love Killing Eve. I think she has amazing gravitas, while being able to sneak in surprising moments of humour. She is also a National Theatre School Alumni and I hope I get to meet her one day.

– A note pad to write thoughts and ideas down
– A book
– Headphones, Music.

I have a bad habit of forgetting my phone, so surprisingly not that. I think I would feel relieved if someone said I couldn’t have my phone. Honestly, lately I’ve been going out with no purse. Just trying to carry a wallet like a guy, because why should women carry everything!

An adventure in nature. A new hike that leads to some crazy overlook or body of water. Have an delicious picnic with crusty bread, cheese, prosciutto and fruit. Then going for a swim and/or finding a good spot to journal.

I’ve had a hard year in a personal way, so I’ve really learned the value of self love and compassion. I always understood the idea, but never really took on the practice. Now that I’ve had to, I’m finding happiness in myself not in my circumstances. Happiness is being able to take in the present with an open heart.

Martin Luther King Junior. I’ve loved him since I was little and always dreamed of leading a revolution.

Off the top of my head, I’m currently into The Marvellous Mrs Maisel, Billions, Killing Eve, Veep, and Sherlock (BBC).

I don’t have a specific one right now. But I support anything that helps develop women and diverse voices in the arts. Also women who escaping abuse or need help with furthering their education.

Quote: What would you do if you believed you were 100% worthy of it? It’s not my quote, I heard it a couple days ago and it struck me pretty hard.

Holiday Destination: Everywhere. But my next destination will either be Croatia, Argentina, or Amsterdam.

Drink: Whiskey Neat. Anything peaty from the Islay

Sports Team: Who ever has the craziest fans when I’m at the stadium. Honestly, I think I’m more into watching the fans.